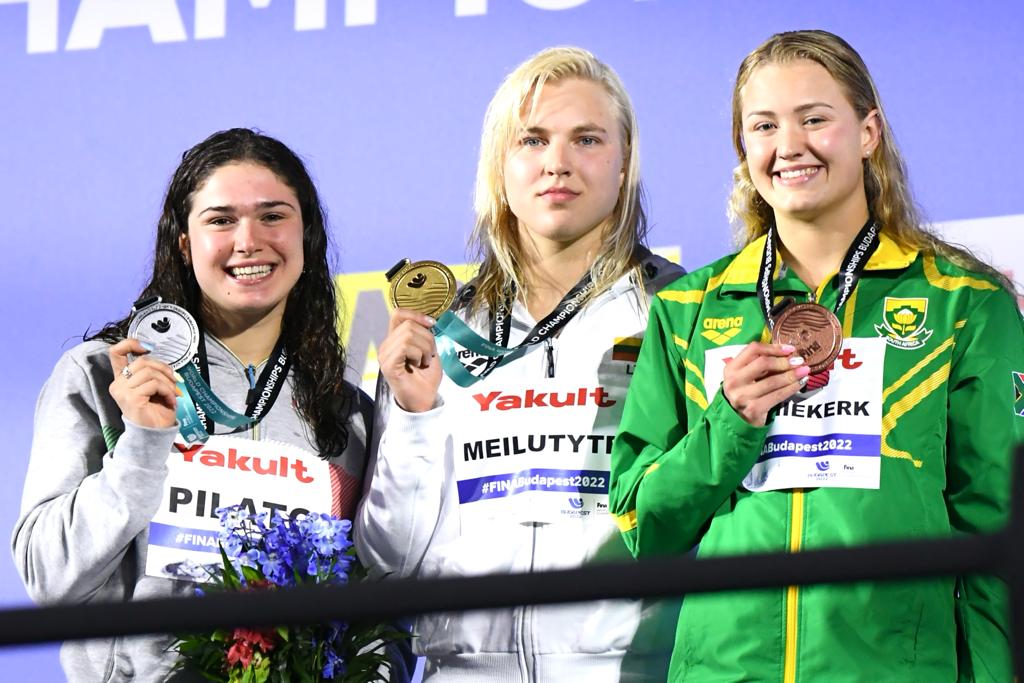 Lara van Niekerk of South Africa was the only swimmer from an African country to land on the podium at these World Championships. Current photo via Fabio Cetti

This is the first time that the continent of Africa has collected less than 2 medals since back in 2001 when South Africa’s Roland Schoeman took bronze in the 50 freestyle. South Africa has won 2 or more medals at each edition of this meet since 2003.

Among those who have brought in multiple medals for South Africa include Schoeman, Chad le Clos, Tatjana Schoenmaker, and Cameron van der Burgh. Other African medalists over the years include Ous Mellouli of Tunisia, Kirsty Coventry of Zimbabwe, and Farida Osman from Egypt.

Additionally, world junior record holder Matt Sates might have been a contender for medals here but was sick right before the meet and is also focussing on the Commonwealth Games. Sates qualified for one final here, placing 8th overall in the 200 IM with a 1:58.27.

The closest any other African swimmer came to medalling here was Farida Osman from Egypt who was 4th in 50 butterfly with a 25.38 African record. She also finalled in the 100 butterfly with a 57.66. Osman has medalled at the past two World Championships, taking bronze in the 50 butterfly in both 2017 and 2019.

Zane Waddell of RSA retired at the age of 22 after winning gold in men’s 50m backstroke at Gwangju 2019.

Re RSA absentees; it has to be acknowledged that economics may’ve been a key factor with regards to which event to attend given RSA swimmers essentially have to self fund their own trips to most major events.

Therefore it may be the case that RSA CommGames federation may’ve offered some level of support as against RSA Swimming offering practically none, thus potentially making the decision for those swimmers understandable.