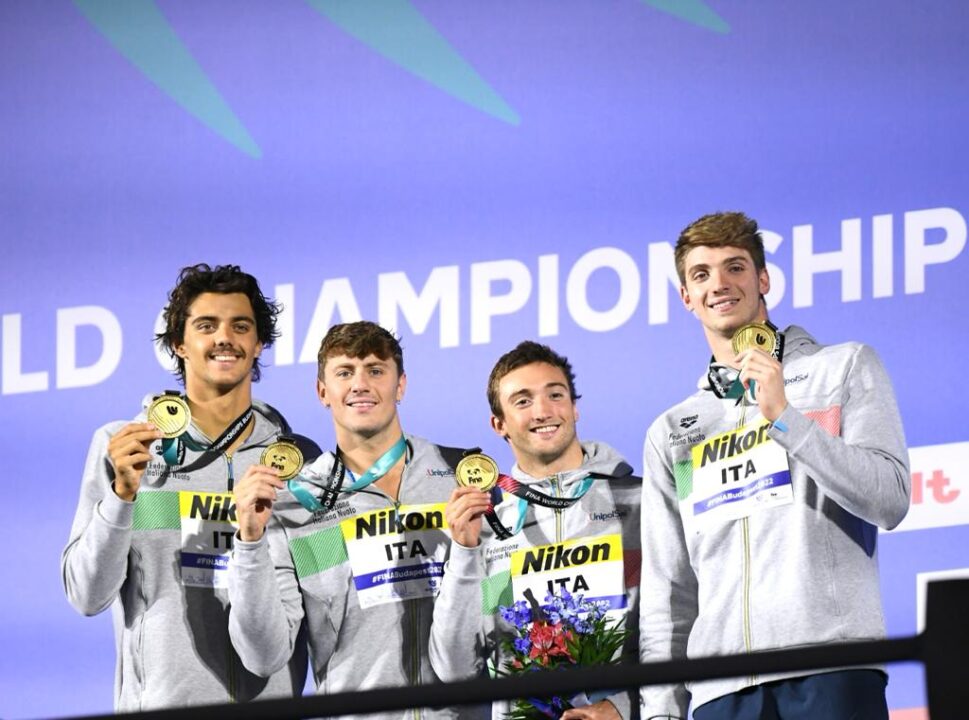 The previous Italian Record was held at 3:29.17 and was set by the same quartet at the Tokyo 2020 Olympics last summer. Current photo via Fabio Cetti

Man, was the final session of the 2022 World Championships a great one for Italy. It began when Bendetta Pilato took Silver in the women’s 50 breast, marking her 2nd medal of these Championships. Then, veteran distance superstar Gregorio Paltrinieri put together a truly stellar performance in the men’s 1500, dominating the field from the start and posting the 2nd fastest time in history. Italy’s session, and World Championships, ended with the biggest bang possible: an upset win in the men’s 4×100 medley relay.

Not only did Italy beat out the defending Olympic Champs in the USA, the win marks Italy’s first World title in the event ever. It was the perfect way to cap off a stellar World Champs by Italy, in which they won 5 Gold medals and 9 medals overall.

On paper, the Italian men’s medley relay looked phenomenal going into the race. They currently have the fastest front half in the world, as Thomas Ceccon set a new World Record in the 100 back earlier in the meet, and Nicolo Martinenghi was the Gold medalist in the 100 breast at these Championships as well. It was clear that Italy had the ability to be in the lead at the halfway point, but it was going to be an uphill battle to fend off the Americans on the back half.

Yes, the American relay was missing Caeleb Dressel, but Michael Andrew stepped up in a huge way on the fly leg, splitting 50.06. Frankly, there’s no guarantee that Dressel would have split faster than 50.0 on this relay. Just as Michael Andrew stepped up for the Americans on the fly leg, Italian flyer Federico Burdisso had the swim of his meet, probably the swim of the year for him. Burdisso split 50.63, mitigating the damage done by Andrew and handing anchor Alessandro Miressi a 0.40 second lead.

Burdisso’s swim was so significant because he’s had a tough year. He failed to qualify for Italy’s World Champs roster in the 200 fly, and in the 100 fly, he finished 10th in semifinals on day 6, clocking a 51.45. He also had a bit of a down year at Northwestern this past season, finishing 21st in the 200 fly at NCAAs, 32nd in the 100 fly, and 51st in the 50 free. Tonight, he posted the 2nd fastest fly split in the field, and his 50.63 is 0.01 seconds faster than Piero Codia‘s Italian Record of 50.64. Of course, Burdisso’s swim tonight came off a relay start, and therefore doesn’t count as an official time, but it was a phenomenal performance nonetheless.

Burdisso handed it off to Miressi, who was overtaken by American anchor Ryan Held on the first 50, but battled back coming home, and got his hand on the wall 0.28 seconds ahead of Held. Miressi split 47.48, much faster than the 48.31 he swam in finals of the 100 free a few nights ago.

Italy’s squad members all improved over their performances at the Olympics last summer, except Miressi, who was just 0.01 seconds off his anchor from Tokyo. When comparing Italy’s swim tonight to GBR’s European Record, which they now share, Italy has a massive advantage on the backstroke leg, and Great Britain was faster everywhere else.

I know this wont be popular, BUT this is good for the sport to have countries other than the USA and AUS win everything….but not too often! 🙂

Props to Michael Andrew for a tremendous split under pressure. Great effort by the us, but Italy was just a little better today.

Scary that no one had an absolute bonkers split. They all swam within their means, so their swim wasn’t a fluke.

Still an awesome relay for U.S.

Had Murphy been near his best, Dressel 49 low, and Held at his best split, could have been a 3:25.

Bodes well for Paris and sets up a good match with Italians. Hats off to them. They swam lights out

Had my grandmother have wheels, she’d have been bike.