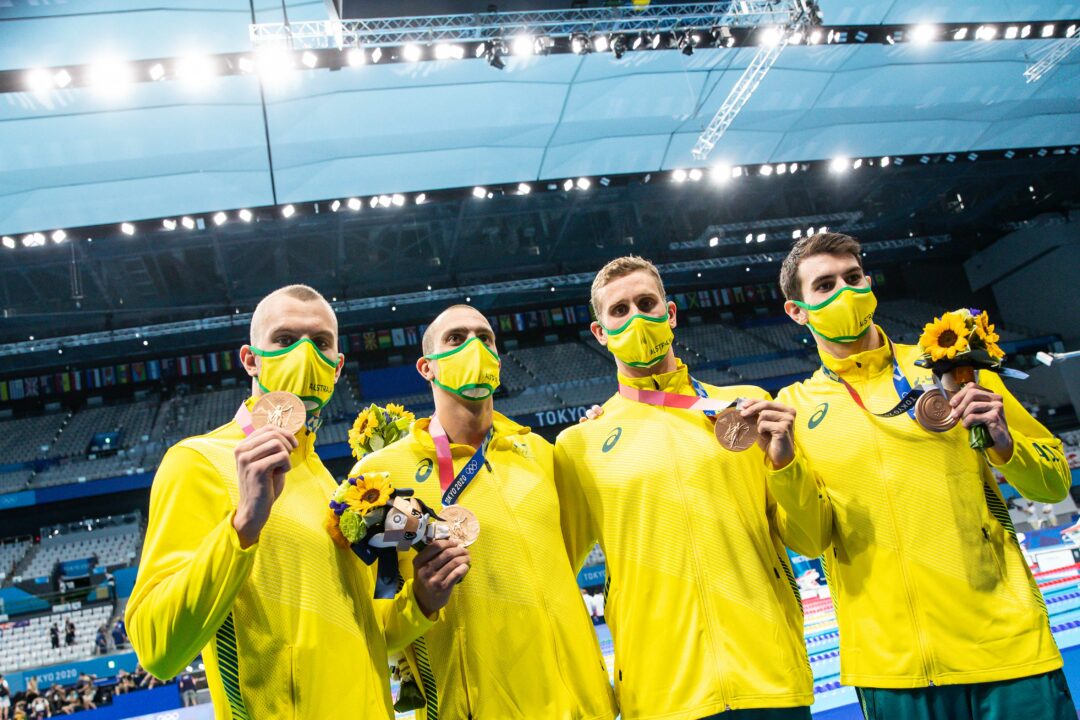 Zac Incerti's relay start registered on official results as a -0.03. We dig into the rules on why that exchange didn't call for an automatic disqualification. Current photo via Jack Spitser/Spitser Photography

One question has come up repeatedly after yesterday’s Olympic men’s 4×200 free relay final: why was Zac Incerti‘s relay start – measured by the official timing system at -0.03 seconds – not grounds for a disqualification?

The answer is more complex than you’d think – let’s take a dive into swimming’s rulebook to explain.

Note: if you’re not interested in the minutia of FINA statutes, skip on down to the bottom of this story, where we’ll give the simplified explanation.

On relay takeovers, the swimmer on the blocks must remain “in contact with the starting platform when the preceding swimmer touches the wall,” according to FINA rule SW 2.6.8. Colloquially, that means the swimmer-on-the-block’s feet have to be touching the starting block when the swimmer-in-the-pool’s hand touches the touchpad.

But that SW 13.1 references FINA’s Facility Rules governing the automatic timing systems, which leads us to…

FINA FR 4.6.3 governs how FINA-approved meets should use electronic timing systems. Relay takeovers are to be measured down to the hundredth of a second. But “For the differential in the relays take-off the manufacturer of the device shall be consulted.”

That essentially means that the company that makes the timing system is able to determine the margin of error of the system that will be officially used.

As an aside, this rule also says that overhead video cameras may be used “as a supplement to the automatic system’s judgement of relay take-off.” It’s still not totally clear where video review fits into the official order of authority, but anecdotally, we know from past results that video can at times be used to overturn false-start DQs on appeal. We have not, in contrast, seen any instances where an official didn’t call for a DQ, but a swimmer was later DQ’d based on video footage.

But this old document references FINA FR 4, and lists the Omega Electronic Timing System with a recommended tolerance of -0.03 seconds.

Assuming the specific tolerance hasn’t shifted with new models of timing equipment, that would mean that any relay exchange slower than -0.03 would be within the range of tolerance spelled out by the manufacturer, and would not be grounds for an automatic disqualification.

Here’s a summary of all the legalese above:

All said and done, Incerti’s -0.03 relay exchange falls (albeit, barely) into the manufacturer-recommended range where automatic timing doesn’t overrule the human officials. Had Incerti been a tick faster, though, his start would have called for an automatic DQ.

1948 London Shirley Strickland of Australia was placed 4th in the women’s 200m track, in 1975 a relook at the photo finished and she had actually finished 3rd, She could have claimed the bronze medal but because she had 7 olympic medals she refused saying that the American girl Audrey Patterson could keep the bronze because she wasn’t taking a medal away from somebody who only had one, that’s class!

Well, anyone who knows how to do a -0.03 sec deserves a gold medal already.

SwimSwamWhy on the official website Zac’s reaction time is 0.29? Where are you pulling this -0.03 reaction time?

I see that on the live site as well, but the PDF document of results show the -.03.

So basically this was the best relay exchange ever?

I thought the deal was that the technology measuring when the swimmer leaves the blocks is not accurate to a hundredth of a second, unlike the pads in the water that measure the finish. The block technology has only been scientifically proven to be accurate with in a range of .06 of a second, or in other words + or – .03 of the official readout it gives in the results. So when Rowdy obsesses about a .61 reaction time it really could have been anywhere from .58 to .64

It’s interesting though, in the document you guys link to they say the Seiko system actually IS accurate to .01… Which makes you wonder why we are using the Omega… Read more »

4
0
Reply
sven
Reply to  He Gets It Done Again

It is not difficult at all to make pressure sensors that are accurate to 0.01s, so I strongly doubt it’s an actual technological limitation.

I think I read this somewhere years ago, but now I have no idea where. Feel free to discount it but it seems plausible to me. I think it’s more of a question of when the foot is no longer pressing down on the block vs. when the toe stops touching the block. i.e. on a start, the balls of the foot are pressing down on the pad and the toes are curled over the front. Since the last part of the body to leave the block is the toe in that case, there could theoretically… Read more »

But the official results link had his reaction time as 0.29?