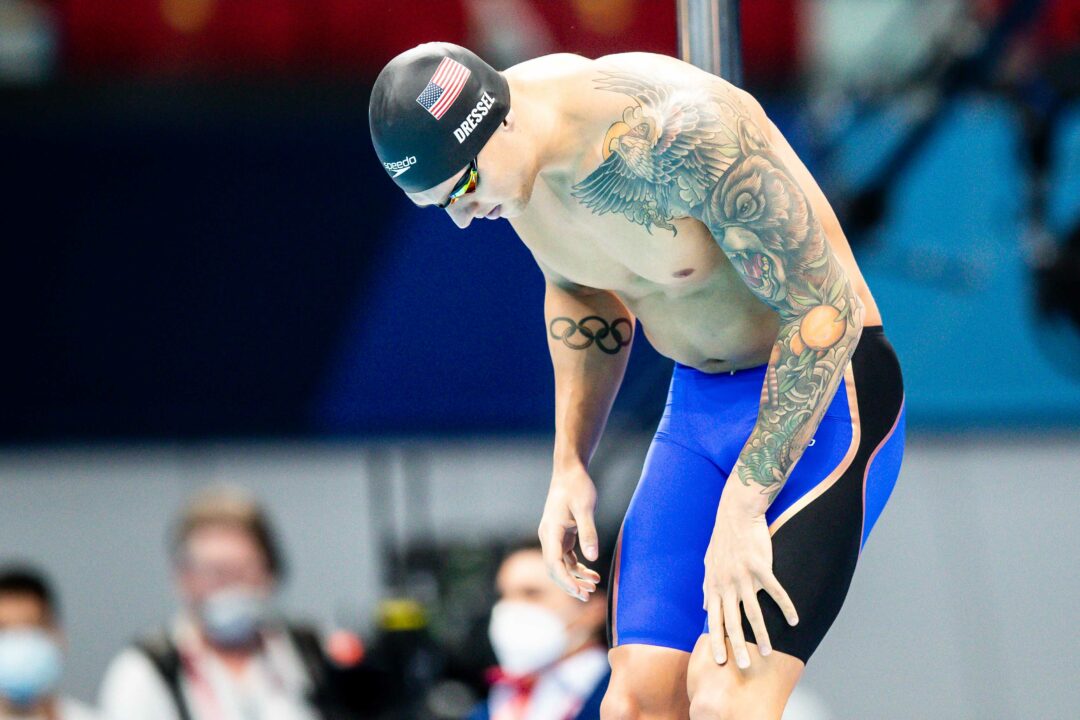 USA's Caeleb Dressel, the 3rd-fastest performer of all time, will race in the final of a men's 100 free that took 47.82 to qualify for. Current photo via Jack Spitser/Spitser Photography

One of the most anticipated finals on Day 5 in Tokyo will the that of the men’s 100 freestyle. While it is a perennial favorite with fans the world over, what makes this year’s race even more exciting is its potential to be the fastest 100 freestyle final in history.

On the potential chopping block will be Eamon Sullivan’s Olympic Record of 47.05 from the 2008 Beijing Olympic Games and Cesar Cielo’s World Record of 46.91 from the 2009 World Championships in Rome. Both records were set during the “super suit” era, when swimmers raced in full-body suits that incorporated polyurethane, a rubbery substance, with woven elastane-nylon into the suit’s material, giving swimmers extra buoyancy and reducing fatigue. Beginning in 2010, FINA banned the super suits and only allowed suits made out of textiles.

Now, at the 2020 Tokyo Olympic Games, the finalist in the men’s 100 freestyle have finally shown themselves to be the fastest in history. The men’s final, scheduled for Thursday morning in Tokyo, will have been the hardest to qualify for, with the fastest qualifier in lane 4 – Russian Olympic Committee’s Kliment Kolesnikov (47.11) – and the fastest qualifier in lane 8 – France’s Maxime Grousset (47.82). Meanwhile, USA’s Caeleb Dressel is the only finalist who has already been under 47 seconds in his career.

13 out of the top 20 men’s 100 free performances of all time, and 5 of the top-10 performers, come out of the 2008-2009 era. Kolesnikov’s 47.11 made him the 8th-fastest performer. All eyes will be on Kolesnikov, USA’s Caeleb Dressel, defending Olympic Champion Kyle Chalmers of Australia, World Junior Record-holder David Popovici of Romania, and the rest of the field as they try to make history tomorrow morning.

So the Aussies pre race agreed, that the 4 x 200m would be a complete swap.
Interesting.

So are they blaming Dressel for the poor 4 x 200
I’m sure it was offered to him but he declined.

He has said all year that he wanted to be on that final relay. Dave Durden along with other coaches failed to put him into the line-up.

Where did you see that it was offered to him?

I’m sure it was offered to him. Isn’t he the great sprint sensation?
No seriously……..if he jumped up and down hard enough he would’ve been added.
Just my view.

So you’re not sure he was offered it. Glad that’s settled.

Perhaps I should lower them after this year.

WOW the top qualifier in Rio (Nathan Adrian 47.83) wouldn’t qualify for this final (47.82). Insane and great improvement from these athletes

It was pretty fast I’d have to say. Go Dressel! Beat the ROC!