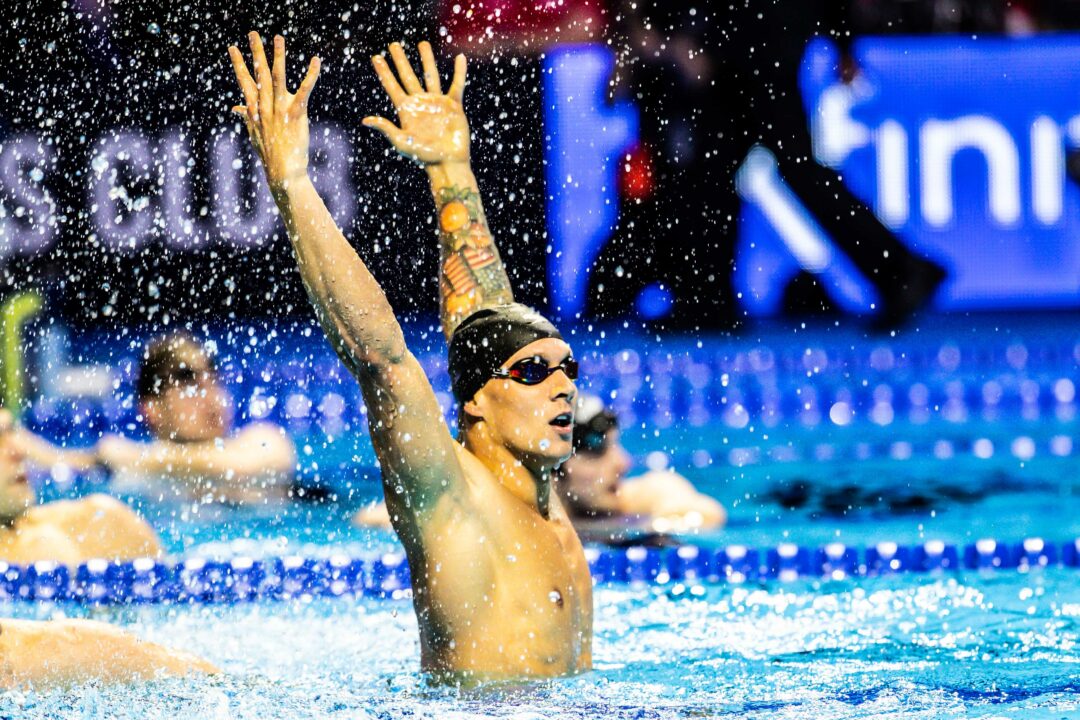 Another showdown between Caeleb Dressel and Kyle Chalmers in the 100 freestyle is expected to be one of the most anticipated races of the Olympic Games. Current photo via Jack Spitser/Spitser Photography

The men’s 100 freestyle is amongst the most highly anticipated races of the entire Olympic Games, featuring a clash between the reigning World Champion and the reigning Olympic Champion, who also happen to be two of the fastest men to ever swim in a textile suit.

Caeleb Dressel: In 2016, Dressel qualified for his first US Olympic team coming off of a breakout NCAA campaign. Dressel only qualified to swim the 100 freestyle individually, placing sixth in the final with a time of 48.02. However, in 2017, Dressel exploded to win the World Championship title in the event, swimming a final time of 47.17, shattering the American Record in the process. Although he faced an off year in 2018 after a motorcycle accident, Dressel came back at the 2019 World Championships by holding off Olympic Champion Kyle Chalmers to defend his title in a time of 46.96. With his time at those Championships, Dressel became the fastest performer to ever swim the race in a textile suit, coming within .05 of the world record. This season, Dressel has already posted a time of 47.39 at the US Olympic Trials, putting him in a prime position to claim his first individual Olympic title.

Kyle Chalmers: As previously mentioned, Chalmers is the defending Olympic Champion in the 100 freestyle, after winning the Olympic title in 2016. In Rio, Chalmers, who was just 18-years-old at the time, surprised the field by posting a time of 47.58 en route to his gold medal performance. After a great performance in Rio, Chalmers looked to be the favorite for gold at the 2017 World Championships. However, he withdrew from the competition due to heart surgery to treat a condition known as Supraventricular Tachycardia, which he was diagnosed with as a child, leaving Dressel to claim the title. At the 2018 Pan Pacific Championships, Chalmers beat Dressel head-to-head for the first time since Rio, winning gold in a time of 48.00. Then, at the 2019 World Championships, Chalmers narrowly missed the gold medal, coming in with a time of 47.08. Chalmers’ time from those championships ranks him as the 3rd fastest textile performer in history, only behind Dressel and teammate Cameron McEvoy. At the Australian Olympic Trials, Chalmers won the event in a time of 47.59, setting himself up for a great battle with Dressel once again.

Behind Dressel and Chalmers, the field looks relatively open. However, there are several big names who will push the pair in an effort to win a medal.

Russian Kliment Kolesnikov went on a tear during the recent European Championships, setting a new championship record in the event with his time of 47.37. Kolesnikov has been as fast as 47.31 in the event, a time he posted at the 2021 Russian Championships, which booked him his ticket to Rio and currently stands as the fastest time in the world this season. However, at the European Championships, Kolesnikov failed to final in the 100m backstroke following his 100 freestyle performance. Seeing as he holds the world record in the 50m backstroke, Kolesnikov may place more of his focus upon the backstroke events in Tokyo, where he is a clear medal threat. He’s not swimming for Russia in the 200 backstroke (Evgeny Rylov and Grigory Tarasevich are their two representatives in that event), which eliminates a big potential scheduling conflict for him.

Behind Kolesnikov, Russia has a strong-hold over the 100 freestyle, holding 4 of the top 10 times in the world for 2021. Andrei Minakov currently sits at #6 in the world with his time of 47.74 from the 2021 European Championships. Minakov, like many others, deferred his enrollment at Stanford University to train for the Olympic Games, spending the last year training full-time. At such a young age, Minakov still holds a lot of potential for big time drops, especially considering his training circumstances.

At the European Championships, Italian Alessandro Miressi placed second to Kolesnikov, swimming an Italian record of 47.45. Miressi, who is 22-years-old, is at the age that most consider to be “prime time” for swimmers. With this, it is likely that he could chop more time off of his personal best and move up to challenge for a medal.

Zach Apple will be the other US representative in the event following his runner-up performance at the 2021 US Olympic Trials. At the trials, Apple posted a time of 47.72, finishing second to Dressel. Apple has been as fast as 46.86 off of a relay start, and should be in the mix in Tokyo.

Like Apple, Duncan Scott is another name who has posted some blazing relay splits in the 100 freestyle. At the 2019 World Championships, Scott ran down American Nathan Adrian on the anchor leg of the 400 medley relay, splitting 46.14. Scott’s split currently stands as the second fastest 100 freestyle split in history, only behind Jason Lezak’s 46.06 from the 2008 Olympics. Although Scott would definitely be a medal threat here, he will not be entering the race in Tokyo. Instead, Scott will focus on the 200 IM and 4×200 freestyle relay, which both conflict with the 100 freestyle.

Duncan Scott: Courtesy of Mine Kasapoglu for ISL With permission

The other British representative in Tokyo is 18-year-old Matthew Richards. Richards has been a fast-rising star in his country, having a breakout meet at the 2020 European Championships where he won a gold medal and two silvers as a relay swimmer. At the British Swimming Selection Trials, Richards surprised the field by placing second in a time of 48.23, a rise similar to that of the aforementioned Chalmers. Given his trajectory, Richards certainly may be a threat for the final in Tokyo.

Dark Horse: David Popovici (ROM) – Romania’s Popovici has become a rising force in the sprint freestyle events, placing 6th at the 2021 European Championships in the 100 freestyle. At only 16-years-old, Popovici has already been as fast at 48.08 in the event, which is the fastest time ever posted by someone his age worldwide. With his trajectory, Popovici could challenge for a spot in the final in Tokyo.

In addition, the men’s 200 backstroke semi-finals fall on the same night as the men’s 100 freestyle finals in Tokyo, which could create some schedule conflicts for him.

I think it’s Rylov and Tarasevich in 200 back for Russia?

If you’d told me after Rio that Chalmers was going to follow a solid improvement curve and look close to or at 46 shape by Tokyo, I’d have sprinted to go bet on him for gold.

After years of 47 mid championship swims, it shows how far the event has developed recently that not only could Chalmers swim 46 and get silver, there’s an outside chance he could be one of three guys who go 46 at the meet (they won’t all do it in the final, but across the relay lead off, semis and final it’s feasible).

I’ve got a sneaking suspicion Chalmers will do it, but it’s going to be an amazing race whatever happens.

Can he hold off Chalmers? Yes.
Will he? I have absolutely no idea, this is easily my most anticipated race.

Kolesnikov did not qualify for the 200 backstroke, Rylov and Tarasevich are the two Russians in that event, so there will be no schedule conflicts for him.

Dressel, Chalmers, Kolesnikov and Miressi are the top four, but This is far too close to call the order that these go.

What happened with Morozov?

I thought Minakov qualified for the 100.

I don’t think it’s particularly close to call, dressel is the clear favorite here. Can he lose? Sure, but he has about a dozen swims faster than all but 1 of the swims of the other 3.

Last time Chalmers has come close to his 47.08? I was exaggerating, but plot the top swims of all competitors and it’s very obvious who the favorite is.

I’ve been getting overhyped but everyone is forgetting the last 3 Olympic finals in the 100 free. It’s a total dogfight the last 15 meters and is essentially about who managed there energy best – not only for the race but the whole of the Olympics! Truly the premier swimming race!

I think Dressel will win it, but third place will probably be between Miressi and Kolesnikov. I don’t see them finishing as low as 5th and 6th.
Liendo is my darkhorse for the final and I think he will make it.

Kolesnikov and Miressi are likely to finish higher than 3rd place, and it won’t be surprising at all.