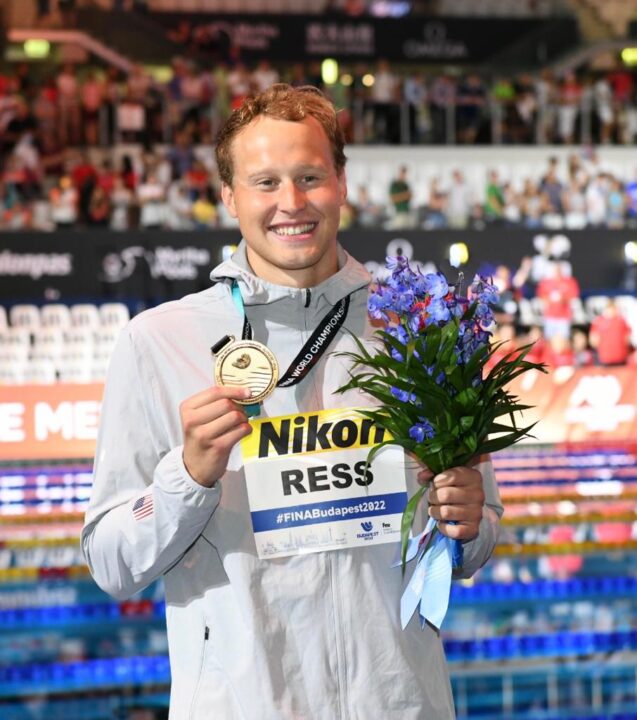 Justin Ress was disqualified, and then ultimately reinstated, in the men's 50 backstroke final. What does the only public video angle show of the finish?

Update: FINA refused to release the video, “in the interest of protocol.”

The men’s 50 backstroke final on the last day of the swimming competition at the 2022 FINA World Aquatics Championships saw a wild turn of events fitting of the unpredictable nature of the meet.

American swimmer Justin Ress touched first in the 50 backstroke final, only to be disqualified for being completely submerged prior to the finish. The call was unlikely coincidental – there were complaints after prior rounds of competition, and the officials may have been tipped to watch for the infraction.

That meant his American teammate Hunter Armstrong was awarded the gold medal.

After the medal ceremony, however, an appeal by Ress resulted in an overturning of the disqualification and a reinstatement of his first gold medal.

In a touching moment, Armstrong handed the gold medal back to his teammate, saying afterward that he preferred to not win by DQ (which would have also been his first World title).

“I would have rather taken second and had him with me than having me get the title with the DQ,” Armstrong said. “That’s not how I wanted it. I was just incredibly proud of him. He’s just an amazing athlete, a great talent, and completely raw. He’s capable of so much. To have that taken away from him, it sucks.”

When conducting video review, officials use different cameras than are available to the public via a closed-circuit system. On Saturday, SwimSwam requested access to the video that was used to overturn the call, and a spokesperson said he would inquire about it. As of posting on Sunday, FINA has not provided that video.

This means that the best view of the finish that we have is from the NBC feed provided online.

Here is that finish, first in real-time, then frame-by-frame.

We can see that Ress, in lane 4 (counting from the top of the screen), clearly does a foot kick at the finish like most of his competitors. It is not as pronounced as some (Armstrong, beneath him, has a bigger and more obvious kick), but it is definitely there.

There is also definitely a moment, after he has finished, where he is completely submerged – as are most swimmers.

So then the question becomes: when did his foot-flip end, and did his feet re-submerge before the finish?

The above-water view is certainly not conclusive. Remember that ‘submerging’ is relative to the calm surface of the water, not any splash, nor any wake or troughs created by the athlete’s body (though toes poking through troughs can be almost-impossible to call).

While Ress’ splash obscures where his feet are at the finish, the arch of his body at the touch definitely make it feasible that his toes were still above the water.

Whether FINA has another view that is more conclusive, we will probably never know. Any surface-level cameras would likely have their view obscured by the splash as well, and given the nature of the call, it doesn’t seem as though underwater cameras have the angle to properly discern whether he had broken the surface.

So this call might come down to whether the ‘benefit-of-the-doubt’ on FINA’s video review system goes to the athlete or to the initial call made in the pool. In most sports, a video review requires conclusive evidence to overturn a call made in the field of play – but most of those sports have a wide array of cameras and are without the challenges of ‘splash’ to obscure the view of those cameras.

FINA has never publicly announced which approach it takes.

This call probably comes down to the eye of the viewer. The video doesn’t appear to conclusively confirm that Ress was submerged, nor clear him of having done so.

As it is, Ress walks away with the gold, Armstrong the silver, and Poland’s Ksawery Masiuk takes the bronze. For his part, Italian Thomas Ceccon, who is demoted to 4th place, echoed Armstrong’s sentiments that a DQ is not the way he wanted to win a medal.

in case someone cares, Ceccon was interviewed by Italian TV yesterday. He said that, while he felt he was undeserving of a medal, because he was fourth, the DQ was correct and should have not been overturned.

I probably just don’t understand why this rule is in place to begin with. If your foot is actually 1mm underwater as you touch, what advantage could you have possibly gained? To me, it’s very similar to the recent “old days” of breastroke when they finally allowed one butterfly kick u/w off the wall/start mainly because it was just too difficult to police the rule well and that maneuver definitely gave an unfair competitive advantage which I’m less assured here. But ditto here on the policing aspect of this. You might be right or not right in making the call from what’s seen here. I’m mean from directly above and not from the long side shot shown here, it is… Read more »

There are lots of rules that don’t necessarily impact a race. Australia was DQ’d a World Championships gold in a relay because one of the team members jumped in the pool to celebrate while one of the outside lanes still had a swimmer crawling home for 8th. It had zero impact on the race whatsoever, but it was upheld.

Sure. But honestly that rule makes more sense to me than this one.

I’m surprised Paltrinieri (spelling?) didn’t get DQ ed for climbing the lane line before lane 7 had finished. And what if he had fallen off the lane line into lane 7?

You can see an official react to GP doing that. I am glad they didn’t DQ him… but would have been okay with it if that had. You don’t sit on your opponents lane line.

Hunter still has the WR … all good.

please put up his heats and semis finishes. They were more blatantly obvious. I can’t believe someone didn’t warn him, cause we all saw it and the Australian commmentator, Bobby Hurley, called it both of those times. He was an international backstroker.

I would if we could, unfortunately history indicates that there is not a snowball’s chance in a hot place that those videos will ever, ever surface again.

They’ve probably already been deleted, just to be safe.

I think Joel is talking about the broadcast footage, not FINA’s special cameras.

You can see Ress’s semifinal on 9Now ‘Day 7 Mini’ starting at 40:40. The finish is around 41:15. You can very clearly see he is fully underwater (not even close) for at least 0.3 of a second. It is an extremely obvious DQ and should have been picked up.

In saying that, the decision has been made now so I don’t think they should go back and change it.

I reckon FINA realised how obvious the previous DQs should have been so warned someone to look for it, and then because in the actual final it was borderline, they caved.

In saying that, the decision has been made now so I don’t think they should go back and change it.

lol can you imagine if they DQ’d him NOW?? It’d be hilarious.

“ FINA has never publicly announced which approach it takes.”
This is both ridiculous and completely unsurprising.

No copies of the replay provided.I suspect the officials didn’t, even look at the replays.Many of these rules are questionable but if you’re going to require officials to be on deck and make stroke and turn decisions then you should respect their decisions.The USA has a lot of influence of course and the easy way out is to just throw out the dq.Like a lot of people on here I did my part officiating when I was younger.Quit doing it because of a very similar situation.Dq,d a swimmer for a one hand touch on breaststroke.I was the only one looking and when the referee asked me if I was sure, of course I said yes because it wasn’t even close.The… Read more »

Why did you have a stopwatch if you were doing stroke and turn?

So it is explicitly permissible to submerge during a turn. What’s the difference between a turn in the middle of the race vs a turn executed at the final wall? Let’s say an age grouper gets confused and executes an otherwise legal turn at the 50meter mark of a 50 meter race thinking they have a 2 lap race. Would / should they get dqd? They are allowed to finish the race with any part of their body, right? Even their head or feet. Ress could argue his intention was to do an open turn and then warm down, but he got tired and stopped when his hand hit the wall and the race was over as soon as the… Read more »

difference between the turn and finish in backstroke Is on the turn you are allowed to roll over on your stomach and take 1 stroke. At the finish the swimmer must remain on their back until they have touched the wall.

This seems like a stupid rule, no? What is it really trying to prevent? Swimmers from submerging at the flags and kicking streamline dolphin kicks into the finish? If that’s what you’re worried about, just prohibit *that.*

Also, I’m pretty sure that this is the only stroke with this dumb rule. Breaststroker and butterfliers routinely finish completely submerged (sometimes with kicks!) and the strokes hardly seem to suffer from it.

Just another thing that will create drama for the sport at the national and international level. Its all politics Everyone is capable of doing the backstroke lunge with one hand towards the wall at that level. Its not like its benefitting only a few athletes (perhaps like the 15 meters underwater rule). Of course, the Lochte rule was also created for no good reason. I guarantee you if a swimmer from a less developed nation or one that doesn’t produce a lot of high caliber athletes had done that, there would be no ban.