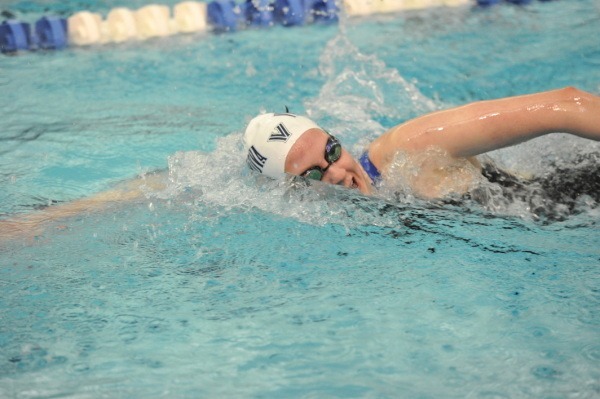 Villanova claimed victories over Iowa State and West Virginia, while the Mountaineer men topped Villanova at the WVU Natatorium on Saturday, January 27th. West Virginia swept the events against Villanova.

MORGANTOWN, W.Va. – The West Virginia University men’s swimming and diving team defeated Villanova and the women took down Iowa State on Saturday at the WVU Natatorium.

The men’s victory secured a perfect 5-0 record in dual meets, marking the team’s first undefeated dual-meet season since 2006-07. The women improved to 4-2 and 2-0 in the Big 12 with the win over the Cyclones.

“Overall it was a good day, and I felt both teams competed very well,” WVU coach Vic Riggs said. “This team has had one of the strongest Januarys of training and competing since I’ve been here, and I feel like they are responding to the challenges in front of them.

“I did feel like we came out a little flat on our energy, and that kind of cost us a bit in the first session. But, once we regrouped, I thought our middle and last sessions were very good. Amelie (Currat), Emma (Harris), Giselle (Gursoy) and Morgan Bullock all had key victories that really turned the meet around for the women. To beat ISU for the first time in a dual meet is special for this group of ladies. Though we lost to Villanova they also gave Villanova a good meet, we just didn’t capitalize on a few events. Our divers did a great job today and were a big factor in our win. The men continue to compete very well, and to finish the season with another pool record and to go undefeated is a great way to send them into Big 12s.”

Additionally, the Mountaineers held a signing day ceremony for 5-year-old Wyatt DeWitt, a Terra Alta, West Virginia, native, as part of a partnership with Team IMPACT.

WVU opened the meet with a pair of wins in the 400 medley relay. The women began with a 3:49.88, followed by a pool-record time from the men. El Merini, junior Tristen DiSibio, freshman David Dixon and Damich posted a 3:19.53 to break the WVU Natatorium record. The women’s team featured senior Amelie Currat, junior Emma Harris, Bullock and sophomore Julia Nilton.

The Mountaineer men followed with a strong start individually, as senior James Koval won the 1,000 freestyle, thanks to a time of 9:36.19. Freshman Max Gustafson placed second, with a 9:53.68.

Junior Morgan Carr earned a win for the women’s team in the 200 butterfly. She touched the wall in 2:04.47. For the men, West Virginia finished first and second, led by sophomore Gabe Swardson‘s 1:53.45. Fellow sophomore Ryan Kellywas second in 1:54.64.

Moments later, Damich earned his first individual win of the day in the 100 freestyle. He touched the wall in 45.83, winning by 1.42 seconds.

The Mountaineers then won both 200 backstroke events. Currat finished in 2:00.05 to win by more than two seconds for the women. In the men’s race, Saladin earned his second win of the day for WVU with a 1:51.18.

West Virginia again won both races in the next event, the 200 breaststroke. Harris paced the way for the women, finishing with a 2:23.34 and winning a tight race by 0.50 seconds. DiSibio got his second win of the day, and first individually, for the men. He won with a time of 2:04.13.

Later on, Saladin continued his strong day with his third victory in the 500 freestyle with a time of 4:34.23.

Bullock earned her first individual win, and second total, in the 100 butterfly, touching the wall in 55.91 to win by one second. In the men’s race, Russo followed with his second win of the day, thanks to a 49.06.

The Mountaineers closed the meet with a win in the men’s 200 freestyle relay. Neaveill, Nate Carr, Damich and El Merini finished in 1:23.58. The women finished second in 1:35.67, ahead of Iowa State by 0.16 seconds.

The day began on springboard, where West Virginia won three of the four diving events. The men placed first and second on 1-meter and finished 1-2-3 on 3-meter, while the women won the 1-meter event and finished second on 3-meter.

“First of all, I’m going to miss Mike and Logan,” WVU diving coach Michael Grapner said. “It has been a pleasure to coach them for the past four years. Let’s keep it up and finish strong. Today’s meet was pretty good all around. I think the women had a good learning experience and can use today to help prepare for the Big 12 Championship. We have been doing very well in the workouts and all of the pieces continue to fall into place. Now, the emphasis needs to be on consistency. We have the dives, and we have done the work. Over the next few weeks, we’ll set our sights on the conference meet and Zones.”

Up next, the Mountaineers travel to the Big 12 Championship to begin postseason competition. The event in Austin, Texas, is held from Feb. 21-24.

“ This weekend was all about swimming under highly stressed conditions prior to the start of our Championship taper. As expected, our men and women came out with great efforts across the board,” Swimming head coach Rick Simpson said.

“The women’s rivalry with West Virginia dates back to the days that both of us were in the Big East together. We have a very high level of respect for their team and their coaching staff. This provides an annual meeting that is filled with excitement and great racing. This year was no different,” Simpson said.

Next up the Wildcats will travel to Penn State on Friday Feb 2. Action will begin at 5 p.m.

Iowa State’s breaststrokers gave the team a nice spark, with seniors Kasey Roberts (1:06.26) and Danica Delaquis (1:06.32) placing first and second respectively in the 100 breaststroke, and freshmen Martha Haas (1:07.04) and Lehr Thorson (1:08.57) in sixth and seventh. Another pair of seniors, Mary Kate Luddyand Laura Miksch, each continued their success in the 200 fly and 50 free, both placing second in their respective event.

“I was happy with how Sydney and Dana came out strong in the three-meter event,” diving coach Jeff Warrick said. “They were up against a strong West Virginia team. It will make for an exciting Big 12 Championships in a few weeks.”

Villanova would take the top-three 100 free spots, while Iowa State’s Anna Andersen, Luo and Miksch would place fifth through seventh. The breaststrokers raced well in the 200-yard race, with Delaquis (2:23.84) and Roberts (2:24.50) taking second and third, while the freshmen Haas and Thorson finished seventh and eighth overall. In the 500 free, Ruegemer would lead the way, placing fourth overall with a 5:04.79. Luddy would take second in the 100 fly, touching at 56.91. In the 200 IM, Ruegemer, Kami Pankratz and Ruehle would finish in the five through seven positions.

The final event of the meet was the 200 freestyle relay, where the three ‘A’ relay teams were all within .5 seconds of each other, with Iowa State finishing in third. The ‘B’ relay would take fourth overall, as Iowa State comes up just shy of a victory against Big 12 opponent West Virginia, dropping the meet by a score of 160-140.

“I was pleased with how our team raced throughout the meet,” head coach Sorenson would say following the meet. “Unfortunately, we came up just short in a few close races that could have turned the final score around.”