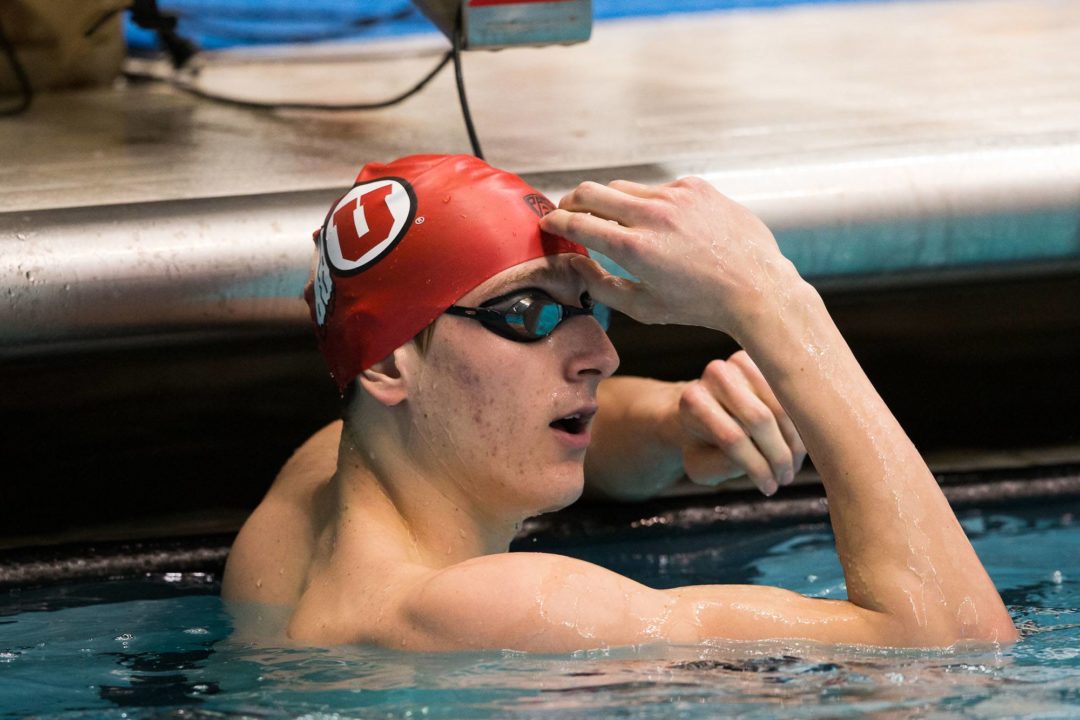 The Utes won a combined 34 of 36 events en route to claiming victory over BYU in the women's and men's meet. Archive photo via Utah Athletics

Utah hosted BYU for a dual meet on Friday (diving) and Saturday (swimming), January 26-27th. Utah’s women only dropped 2 events to BYU, while the men pulled off a full event sweep, combining for a total 34 event wins in 36 events.

SALT LAKE CITY – Utah Swimming and Diving swept BYU for the fifth time in six years with a pair of resounding victories at Ute Natatorium this afternoon.

“I could not be more proud,” head coach Joe Dykstra said. “We had a big week of training and we were a little tired heading into today but we showed a great competitive spirit and won the fight.”

Senior Days are quickly approaching with the women hosting Washington State on Sat., Jan 10 at 11 a.m. and the men welcoming USC on Sat., Feb. 17 at 2 p.m.

SALT LAKE CITY – Freshmen Mariah Lindsay and Brigham Harrison shined despite a loss to Utah in the Deseret First Duel Saturday afternoon at the Ute Natatorium in BYU’s final dual meet of the season.

“We are thankful Utah was able to host this meet for us because it was supposed to be at our facility,” BYU head coach John Brooks said. “This has been a rocky year for us. We have faced a challenge in everything we have done. With that said, I could not be prouder of our team. Today I saw a team that cheered for each other, fought for everything they could and did the very best with what they had. Mariah Lindsay stepped up and had an amazing meet as well as Brigham Harrison.”

Junior Haley Bertoldo earned BYU’s only individual first place of the meet in the women’s 100-yard backstroke with a time of 57.48. Sophomore Katie Smith, who just returned from her LDS mission in December, took second in the women’s 50-yard freestyle with a new season high of 24.33.

A team of Tiare Coker, Casey Cunningham, Vanessa Moffatt and Smith led BYU to its first-place win in the women’s 400-yard freestyle relay. With Utah’s A relay team disqualified, BYU took first with a time of 3:33.74.

The dive team, started the dual meet Friday night competing in the women’s 1-meter and the men’s 3-meter.

“I think the divers performed strong,” BYU head dive coach Tyce Routson said. “I think we could have been a little bit sharper to make it a little bit more competitive. There were some slight misses, but that means we are getting closer to hitting our peak at the right time.”

On Friday, freshman Elizabeth Holmes took second in the women’s 1-meter with a score of 264.08 and freshman Kaylie Jackson earned a new season high of 232.58 taking fourth place. In the men’s 3-meter, senior Matt Denkers took third with a score of 300.68.

The dive team will travel to its final competition of the season on Feb. 2-3 for the Air Force Invitational in Colorado Springs, Colorado. The swim team has concluded the regular season and will now prepare for the Mountain Pacific Sports Federation Championships on Feb. 12-14 in Los Angeles.