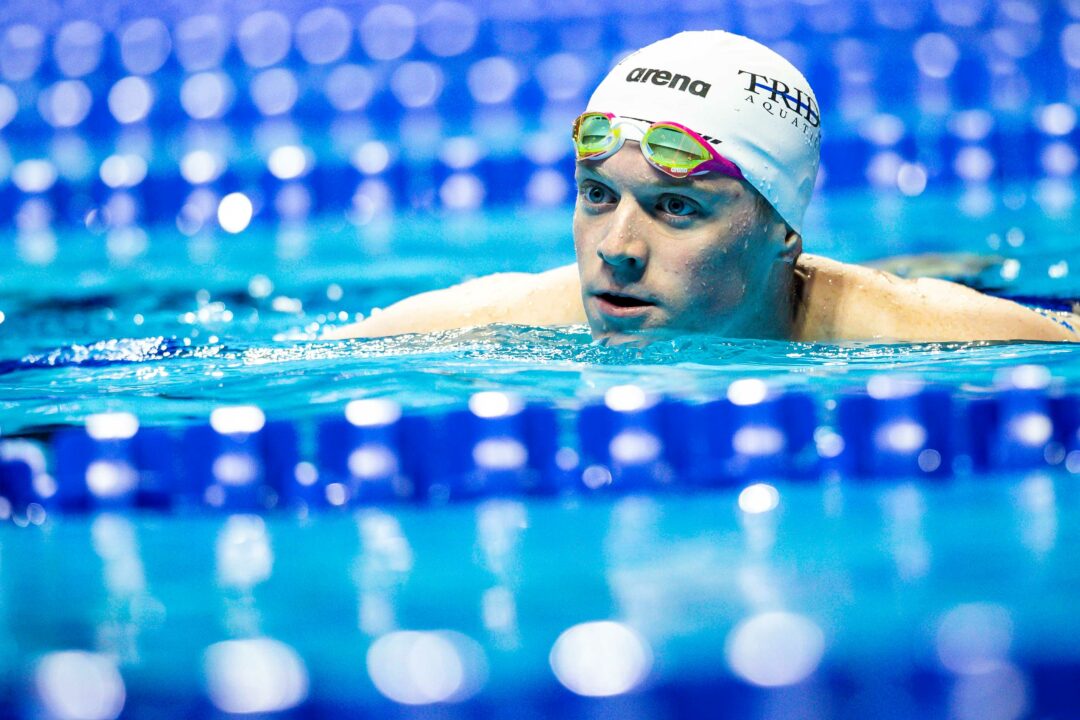 Callan originally announced he would be staying at Michigan for a fifth year, but entered his name into the transfer portal a little over a week ago. Archive photo via Jack Spitser/Spitser Photography

US Tokyo Olympian Patrick Callan has announced that he will be transferring to Cal to use his COVID-19 fifth year. Callan made the announcement by placing the Cal Men’s Swimming and Diving Instagram handle in his own Instagram bio.

Callan graduated from the University of Michigan’s Ross School of Business this spring with a degree in Business Administration. Callan originally announced mid-March that he planned to stay at Michigan for a fifth year, but then entered the transfer portal slightly over a week ago.

Callan made the US Olympic Team this past summer after finishing 6th in the 200 freestyle at Wave II Olympic Trials. He competed in the 4×200 freestyle as he swam the third leg of the prelims relay. That relay was fifth heading into finals.

He most recently competed at the International Team Trials where he swam a 3:55.26 400 freestyle and a 1:48.76 200 freestyle in prelims. He scratched both event finals.

The Cal men won the 2022 NCAA Championship after scoring 488 points, ahead of second place Texas who scored 437 points. Callan’s best times have the potential to add to the Golden Bears points as his best 500 freestyle time would have finished seventh. Notably, the Cal men had no scoreres in the 500 freestyle. That was one of only three events in which Cal scored zero points at this year’s Men’s NCAA Championship.

Callan also has the potential to make a huge impact at the conference level. Callan’s best times would have won the 500 freestyle and finished fourth in the 200 freestyle.

Callan will help fill the gap left by fifth year seniors Daniel Carr, Sean Grieshop, Trenton Julian, and Bryce Mefford who all were members of Cal’s NCAA roster. So far, Callan is the first announced fifth year for Cal.

Interesting how nearly 10 years ago Michigan was the only the team to break the Cal-Texas hegemony of the 2010s with a decent amount of the same staff they do now, but they just had two US Olympians and an Olympic champ transfer away

5th year, All American, Olympian and Business School Grad. Why not go to a new place that has a lot of business opportunity once he retires? Can’t blame him and he did UM well and vice versa. This drama will stop when COVID 5-6th year stuff ends. Congrats to Patrick I will miss watching him in Ann Arbor.

LOL if I were his future teammate, I’d already be rolling my eyes.

You already know he’s the type to talk out of both sides of his mouth.

What does this mean

Those who don’t stay will also be champions

but he might get Grad school paid for or partially paid for, that is not bad.

My biggest question is: has Durden/Cal been successful at the Worlds/Olympics level? I would imagine that is on his wish list along with some ncaa hardware and a great degree.

Andrew Seliskar at the last Olympics. Trenton Julian at the upcoming World Championship.

This is similar energy as:

It is not zero, Seliskar in Tokyo.

I doubt Eddie could be Durden in a 200 free.

school might weight heavier than world championship medals in his scale

I rest my case. Wouldn’t have really cared if he didn’t even make those comments in the first place. Especially since he is a 5th year. And the focus would be on Michigan instead of PC himself. But he sorta did this to himself.

This is the same guy that wrote here after Mitchell’s transfer to Florida???