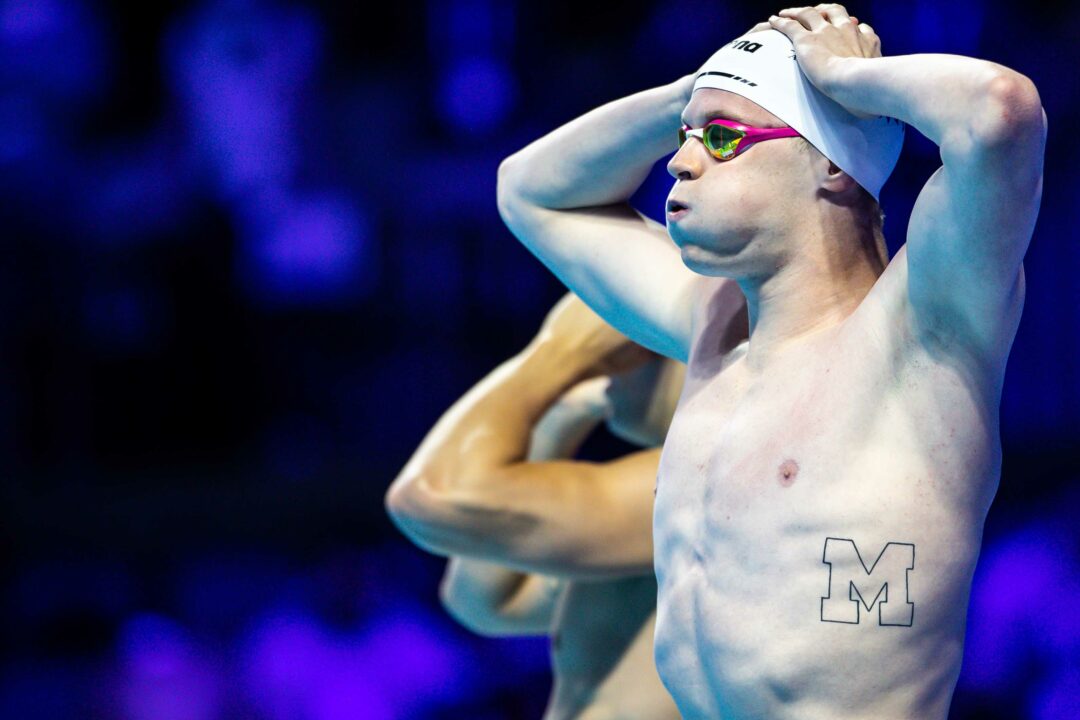 Callan, a U.S. Olympian at the Tokyo 2020 Games, says he is still deciding whether to return to Michigan for his 5th year or not. Archive photo via Jack Spitser/Spitser Photography

The University of Michigan has taken another possible hit via the NCAA transfer portal. The latest entrance is Tokyo 2020 US Olympian Patrick Callan, who entered the portal on Monday.

Callan says he has not yet decided whether he will transfer, but he is exploring the option.

“I have not made any decision on whether or not I am leaving the University of Michigan,” Callan told SwimSwam. “I have recently been considering moving on, but I am keeping the option open to return to Michigan for my 5th year of eligibility. I love this team with my whole heart, but I believe it’s a good time for me to evaluate all of my options and make the best decision for my life moving forward.”

Entering the portal does not require an athlete to transfer; rather, it gives them more flexibility in contacting other programs about the possibility of transferring.

Calan is currently marked with a “do not contact” note in the portal, which indicates that coaches of prospective programs are not supposed to reach out to him.

Callan has one year of eligibility remaining: the bonus 5th year awarded to all athletes who competed in the 2020-2021 season because of the challenges brought on by COVID-19. He previously said that he planned to stay at Michigan to begin his Masters of Sports Management next season and use his 5th year of eligibility.

Callan swam a prelims leg of the American 800 free relay at last summer’s Olympic Games. He split 1:47.12, which was the fourth-ranked split on a Team USA group that qualified 5th into the final.

The finals relay placed 4th, missing the podium for the first time since the event was added to the Olympics.

He also represented the U.S. internationally in 2017 at the World Junior Championships, where he swam on a silver medal-winning 800 free relay.

At the 2022 NCAA Championships, Callan finished 22nd in prelims of the 200 free and 28th in prelims of the 500 free. He earned CSCAA Honorable Mention All-America honors as the leadoff leg on Michigan’s 14th-place 800 free relay.

While Callan formally entered the portal after the May 1 deadline to transfer for next season, there is some leeway for when an athlete ‘begins the process.’

Callan is a native of Tulsa, Oklahoma.

He joins fellow Michigan Olympian Jake Mitchell in the transfer portal, among others.

Wyatt Davis, who also trained at Carmel with Mitchell, left Michigan mid-semester and returned home to focus on his mental health. Davis is training at Carmel, but most recently stated that he plans to return to Michigan for the fall (and has not entered the transfer portal). Michigan has also lost Danny Berlitz, who recently transferred to West Virginia. Berlitz was a two-time NCAA qualifier with Michigan, and has 3 years of NCAA eligibility left. All-American River Wright, who was not on Michigan’s NCAA Championship team this season, also recently entered the transfer portal, and All-American Will Chan also entered the portal prior to this season to explore a potential 5th year transfer.

Michigan finished 3rd at the 2022 Big Ten Championships and 22nd at the NCAA Championships. That was the team’s lowest finish since placing 25th at the 1986 NCAA Championship meet. Head coach Mike Bottom‘s contract is due to expire this offseason, and the school has not yet announced an extension.

Editorial note: this article originally concluded with the word “replacement,” intending to mean a “replacement contract.” That wording was not clear, and has been amended. Bottom is still the head coach at Michigan, with a contract that expires this summer.

I wish Patrick the best wherever he goes or stays. Patrick and I were playing Fortnite a couple weeks ago and I didn’t get his reboot card in one of the matches. That might be the catalyst for the move?

He just started following Cal on Instagram. If anything mid-distance free is Cal’s weakness – Florida, Texas, NCSt, Georgia come to mind as better options if he’s hoping to take a leap forward.
If Cal convinces Hugo to stick around for his COVID year and picks up a big transfer or two, they could repeat next year.

Well now he’s following a good chunk of the Bears on Instagram. Also recently followed ASU’s program acc, with Herbie and Leon also in there.

There’s something fundamentally not right with Michigan

There goes the last one. Are there any Wolverines left who made an international team of some kind?

We don’t know for sure that Patrick is leaving. Given the deadline, his explanation of weighing his options makes sense.

Wyatt Davis repped the US at World Juniors. He has not entered the portal after saying he plans to return in the fall. Gal Cohen swam for Israel at the Olympics. Bence Szabados repped Hungary at World Juniors and Euro Juniors in 2019. Kathryn Ackerman was on the Zajac team in 2019. Olivia Carter swam at WUGs. Octavia Lau swam at Jr Pan Pacs. Victoria Kwan swam at WUGs. Katii Tang has swum at a bunch of international meets for HK. Mariella Venter swam at Worlds in 2019.

I think I missed something, was Callan making comments on Mitchell?

And if so where?

https://swimswam.com/tokyo-2020-olympian-jake-mitchell-michigan-enters-ncaa-transfer-portal/#comment-1049204
If your curious where this all started.

If nothing is wrong with Michigan as he claimed, the why is he transferring? 🤔🤔

To be fair, this is his for his 5th year so he is likely not determining his next path via only swimming.

Just to be clear, Callan has been at Michigan 4 years and is probably done with undergrad. The elegibility he has left is a gift from Covid. Maybe he’s thinking he may want to explore going pro. The ONLY way he can talk to other programs about training in a pro group is to be in the portal…otherwise he could create NCAA violations for himself and the coaches he’s talking with. This “announcement” means nothing more than following the rules that are in place. It’s not a commitment transfer. Should he transfer afterwards, then he will most certainly learn some valuable lessons, but I know of MANY young people (and older, more experienced people) who speak first and think later.… Read more »

Everyone jumping on Callan in this thread and say what you want to about his post, but at least he posted with his real name.

He gets big respect from me for doing that.

This ain’t about me bub.

Interesting note on Bottom’s contract expiring. Really wouldn’t be surprised if he walks.

He resigned for 5 more years in March.

That confused me. Can we say re-signed for clarity?

What happened to Braden’s post that the Michigan SID stated that the contract wasn’t completed? If that post was deleted, does that mean that Bottom’s contract renewal is confirmed?