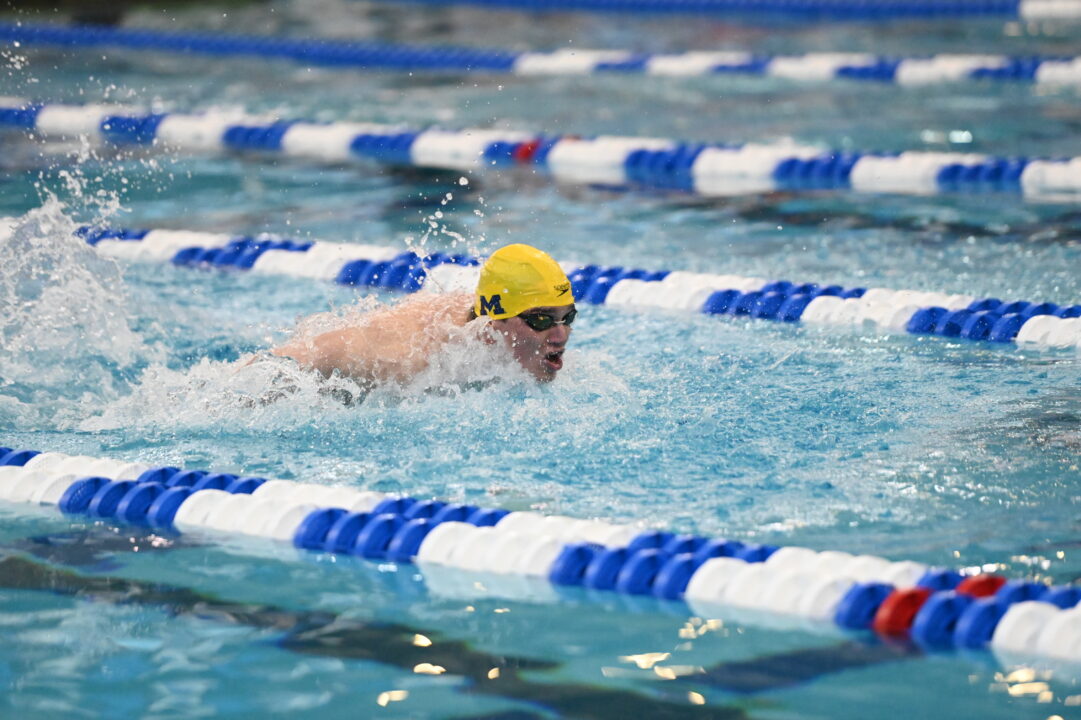 Junior River Wright scored 8 points for Michigan at the 2021 NCAA Swimming & Diving Championships, but missed most of this year without explanation. Archive photo via NCAA Photos

University of Michigan junior River Wright has entered the NCAA Transfer Portal. While entering the portal doesn’t require an athlete to transfer, it allows them to freely contact other programs about the potential of changing teams.

Wright earned five CSCAA All-America awards in 2021 as a member of Michigan’s team for the NCAA Swimming & Diving Championships. Two of those were First Team honors as part of the Wolverines’ 200 medley and 400 medley relays. He also earned three Honorable Mention awards after finishing 11th in the 100 free and 15th in the 100 fly individually and swimming a leg on the Michigan 200 free relay.

Wright got a late start to his junior season for the Wolverines. After racing in the team’s opening meet against Oakland, he didn’t swim again in varsity competition until the team’s season-ending dual meet against Ohio State on January 28. He then raced at the First Chance Meet and Big Ten Championships.

At the time, a spokesperson for the Michigan program said that “River was unfortunately unable to travel to the Minnesota invite but is an active member of our roster,” but declined to elaborate further.

A native of Bluefish Swim Club in Attleboro, MA, Wright started his collegiate career at Michigan as more of a 100/200 butterflier, but really bloomed when he dropped the 200 fly in favor of more focus on the sprint frees as a sophomore.

Michigan has all 5 of its relays qualified for the NCAA Championships. While Wright did not swim on any of those relays at the Big Ten Championships, the team could bring him as a relay alternate – though they would then be required to use him. With no prelims relays, and Wright not showing peak performance at Big Tens, that would be a risky move.

He’s at least the third major member of the men’s team to leave the team this season: 50-point Big Ten Championship scorer Danny Berlitz will transfer to West Virginia next season, and 78-point Big Ten Championship scorer Wyatt Davis is back home training with the Carmel Swim Club in Indiana, though he said in February that he planned to return to the program in the fall.

Another All-American, Will Chan, also entered the transfer portal last fall to explore the possibility of a transfer after graduation to use his 5th year of eligibility.

Heard UW is where he is headed

UW has some really nice pieces, and he could be that bit of “extra” one of their sprint relays needs.

He’ll end up in Columbus at tOSU

4 All-American’s leaving the program, within 12 months, is just bad luck?

Wyatt, Danny, and River for the men.

Maggie is graduating… she and Will Chan are looking to do a 5th year elsewhere. Ricardo Vargas was a huge loss imo when he didn’t come back from Covid year.

True, but Michigan also used to be a huge hot bed for post grad swimmers. Doesn’t seem that way anymore.

She could still choose to go to grad school at UM, like I said, she “potentially” adds to the list.

It might be B1G in general. They went from 24 spots on the conference team down to 18. No stopping at 20 or 22. B1G provides few opportunities. Every team cut breaststrokers. One added 8 divers (14 swimmers). Going to a conference where more of the team can compete seems like a solid goal to me.

Michigan is really known for their diving…

Cuz all their football player are geniuses, right?

Didn’t they have a 4 IM’er leave last semester too?

Berlitz, mentioned at the end of the article