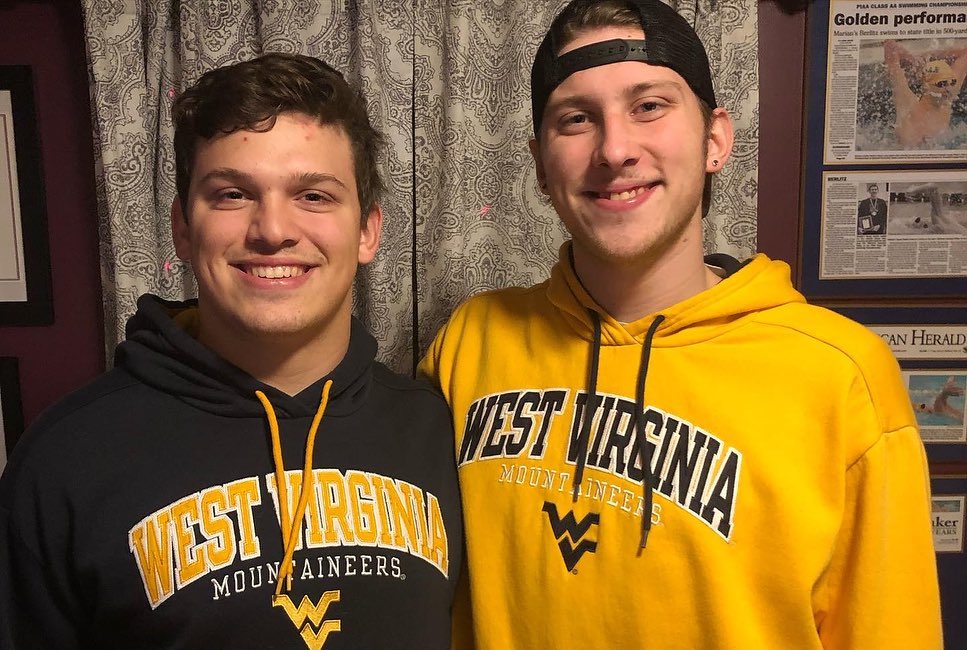 Former University of Michigan All-American swimmer Danny Berlitz has transferred to West Virginia University with 3 years of eligibility remaining. While he has begun classes this spring, he won’t compete for the Mountaineers until the 2022-2023 season.

Berlitz says that joining his younger brother Derek at West Virginia was a big draw for him. Derek Berlitz is a high school senior who is committed to play football at West Virginia next fall as a defensive end.

Danny Berlitz also cited the atmosphere at West Virginia and “mental health reasons” after a stressful year in the COVID-19 pandemic. He says that he was in quarantine for COVID-19 contacts 5 times during his freshman year at Michigan, in spite of never testing positive himself, and that it “really took its toll on (him) both athletically and academically.”

Berlitz has already begun classes at Michigan, but doesn’t plan to compete this season. Instead, he’s focusing on getting back and shape and working on credits toward his decree in athletic coaching education with an eye on becoming an elite swim coach in the future.

Berlitz, who is a native of eastern Pennsylvania, gave his original verbal commitment to Auburn in 2018, before eventually signing with Michigan in 2019.

Berlitz was a two-time NCAA qualifier in his two seasons at Michigan. As a freshman, he was seeded 41st in the 500 free, 35th in the 400 IM, and 24th in the 1650 free. That earned him CSCAA All-America honors after the COVID-19 pandemic canceled the NCAA Championships and all qualifiers were given All-America honors.

Berlitz also made big contributions at the Big Ten Championships in his two seasons. As a freshman, he scored 50 points, led by a 4th-place finish in the mile, which made him the Wolverines’ highest-scoring freshman. As a sophomore, he scored 71 points, including a runner-up finish in the 400 IM. He was also a Big Ten Champion as a member of Michigan’s 800 free relay.

Berlitz saw significant drops in all of his primary and secondary events at Michigan.

With only three teams and the conference, and with the Longhorns being such a dominant force, conference results can vary widely, but Berlitz’s best times would make him at least a 45 point scorer at the Big 12 level as the Mountaineers fight to hold on to that second-place position ahead of TCU.

West Virginia qualified one swimmer, David Dixon, for the 2021 NCAA CHampionships. He earned Honorable Mention All-America honors via a 12th-place finish in the 200 fly. They also sent two divers, Paul Lenz and Jacob Tremblay, to the meet. All three returned for the Mountaineers this season.

Berlitz used 2 years of eligibility at the University of Michigan. Including the NCAA-granted extra year for the complications of the COVID-19 pandemic, this means Berlitz has 3 seasons of eligibility remaining.

Great move best for you. Your a great swimmer and person. You will dominate there

I’m not sure trading a Michigan degree for a WVU one is ever “best for” anyone, but if graduation wasn’t realistic then this was the “right move.”

Surely not a joke when you look at the facts… Michigan is arguably the #1 public university in the country. Comparatively, West Virginia is #123. Maybe top 10 in party schools. In this day and age, the value of the degree matters. This kid has done a lot of moving around, hopefully he can figure it out.

While university rankings are subjective and up for debate, there’s no denying this: https://www.amazon.com/ARBOR-WHORE-TSHIRT-T-SHIRT-SHIRT/dp/B07P496V9F

Hey there Jimbob, that would actually be UCLA. https://www.usnews.com/best-colleges/rankings/national-universities/top-public

Last I heard it was Cal, no matter they’re all great

But here’s one thing we can agree upon-
YOU, are the very best reason not to attend to Michigan. Congratulations, you played yourself & your precious university.

West Virginia is the 249th ranked public university in the United States. What’s funny about that?

When you look at his career plans, will that make much of a difference?

Yea, no offense, but I can’t understand why someone would trade going to WVU over UMich unless the decision was out of their control at this point (i.e., academic issues, scholarship revoked, problems with the team, etc). This kid is a great swimmer, but not so great such that he can make a living off of swimming after graduation, so he should make the most of his academic opportunities when possible.

In America, where you go to college does matter to a great extent, and it’s ridiculous to pretend it doesn’t. if you’re trying to go to med school (or any type of grad school, frankly) or a job on Wall Street, you’ll have a much easier path coming… Read more »

I never understood when the SwimSwam commentariat decided that US News should be the only deciding factor of a collegiate decision.

There is more to life than US News rankings. Why should someone muck through 4-5 years at a school where they’re not happy, just because it has a higher US News ranking? I mean, why do they even make colleges outside of the US News top 100? Graduates of the rest of the… Read more »

This flexing about academic excellence is ridiculous. I’ve seen many swimmers spiral into anxiety and depression because they are too focused on getting into the highest ranked school possible. Successful people come from literally every university out there and news flash folks…not every successful person even attends college.

You got that right, Dan.

Let’s not ignore he had a massive breakthrough 2021 season in those settings.

Thanks Braden for making the name correction. It means a lot to WVU alumni.

As a proud alumnus of WVU and 4 year member of the swim team, let me just say this, West Virginia University students have a long tradition of winning prestigious, nationally-competitive scholarships and fellowships. In 1904, a WVU student, Charles F. T. Brooke, was among the first group of Rhodes Scholars. Since then, WVU students have won 25 Rhodes Scholarships, 25 Truman Scholarships, 70 Fulbright Scholarships, 46 Goldwater Scholarships, 28 Boren Scholarships, 36 Critical Language Scholars, 6 Udall Scholars and more. Plus, never has a President of WVU been fired for an inappropriate relationship with a subordinate, violating the rules of sexual misconduct that he himself helped draft.

Perhaps check the accusations surrounding the subject of the article.

As someone who is closer to the situation than you definitely are, I don’t think you have any clue what went into the decision nor what circumstances surrounded him as he was deciding if it was his time to be happier, or to continue to receive hate and negative things from coaches and other athletes

What is the argument here? For every mention of a scholar from WVU, the University of Michigan undoubtedly has 10x more. It is foolish to argue that a degree from a world-renowned university will not make a difference in someone’s future career, salary, life, etc.

Sorry to see you go Danny! Thanks for all your contributions at M! Loved watching you swim faster!

love you son, best of luck everywhere you go ❤️❤️