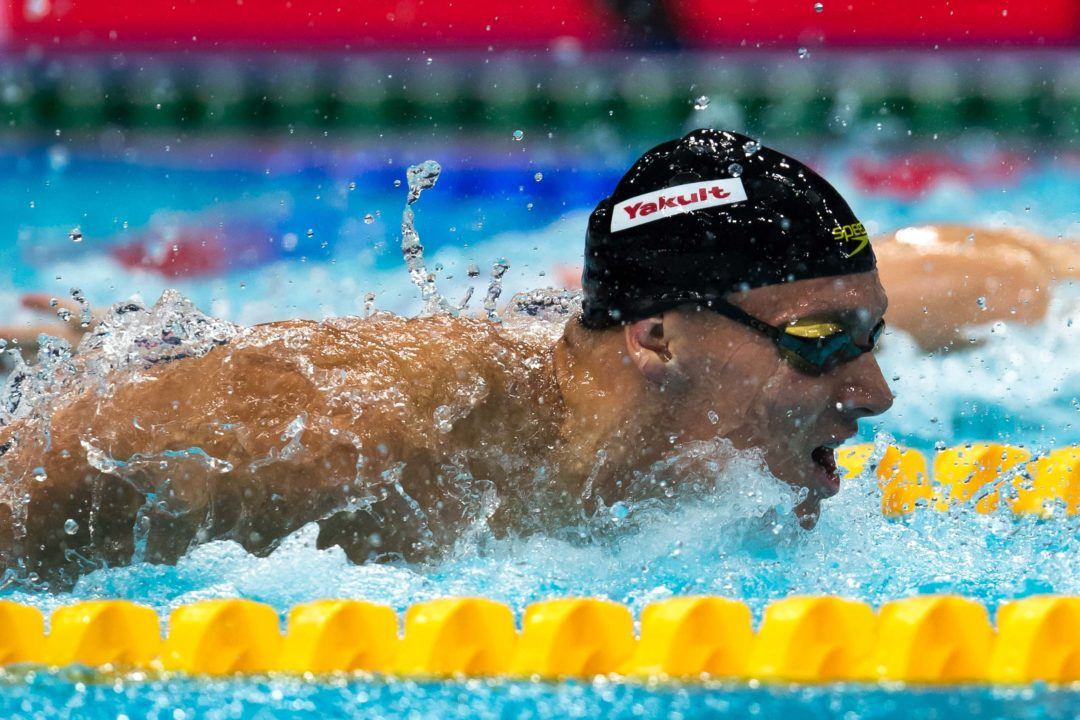 An update to the scoring format suggests that Sarah Sjostrom and Caeleb Dressel will win FINA's Swimmer of the Year awards, not Sjostrom and Adam Peaty as previously reported. Archive photo via Mike Lewis/Ola Vista Photography

An update to the scoring format suggests that Sarah Sjostrom and Caeleb Dressel will win FINA’s Swimmer of the Year awards, not Sjostrom and Adam Peaty as previously reported.

We took an early look at the presumptive winners this week, running through FINA’s stated points system with results from the past year. We noted at the time, however, that there were several areas of the scoring format that were unclear: most notably, the start and end dates for accruing points, but also the specifics of points given for World Championships finish.

The full FINA criteria are here, with very little supporting information given outside of point values. We asked FINA for clarification on several key pieces of the formula the week before posting our first look at frontrunners, but still have not received a response from the swimming federation. However, we have learned from a source with knowledge of the award system that the World Championship points will be counted differently than we anticipated and that Dressel will be earning the award over Peaty.

The main difference is that World Championship points will be doled out for every individual event, our source tells us. Our original read on the formula used FINA’s Swimmer of the Meet points system to rank out the top 12 swimmers of the meet, assigning each of them a points bonus toward Swimmer of the Year. But now we’re informed that those bonuses will actually go to the top 12 finishers in each individual event, making World Championships finish far and away the most impactful factor in the Swimmer of the Meet award.

For example, we had Dressel accruing 180 World Champs points for his Swimmer of the Meet honor, while Peaty (second in the Swimmer of the Meet tally) earned 140. But based on our new understanding of the system, Dressel will actually earn 180 points for every event win, plus points for any other event where he’s inside the top 12. That ultimately earns him 640 points instead of the 180 we had originally calculated. In contrast, Peaty goes from 140 points to 360.

Here’s the full points system. Note that the World Cup standings are still ongoing through mid-November and that it’s still unclear when the World Rankings points are assigned. The award will officially be announced on December 2, 2017.

Fully deserved to the 2 most incredible swimmers this year .

Sjostrom had an awesome year. She set records in multiple meets. She broke the 52-second barrier in the 100 free with her WR.

Dressel is the Sprint King now on the men’s side. Interesting in that Dressel and Sjostrom swim similar events.

Not just the Sprint King anymore. He’s THE King. ?

Eh…I won’t be too sure about that yet. Phenomenal, yes.

As it should be

Anything else would be… just plain stupid

U sure schooling doesn’t deserve it? 😉

I feel Dressel will not win his 50 free and 100 free for every LCM major meets. He is fortunate that Kyle Chalmers and Florent Manaudou are not participating in 2017 World Championships.

Chalmers has been on a consistent improvement curve and is still very young. Manaudou was 21.19 in Kazan. I’m sure the races would’ve been a lot closer

His start would have killed both any day …..and lets not talk about endurance and super efficiency .

There is still one world cup leg left, no?
If peaty shows up and throws down a wr 50/100 be, would that change the standings?

Peaty is not throwing down a world record now. The holidays are right around the corner.

Peaty is competing in the European short course champs early December, so not on holiday yet ;). As Jared says, given we don’t know what the qualification period is (slow handclap), it’s not easy to answer the question. Certainly Peaty hasn’t competed short course for a few years, so WRs are a possibility. Then again, starts and turns are his weakest points, so he won’t have such a large margin over the rest of the world in SC.

Interesting question. The short answer is no. Longer answer is that Peaty would probably have to break three world records to pass up Dressel at this point. And, since we still haven’t gotten official clarification on the eligible dates, even that might not qualify.

The eligible dates are quite essential. Short course championships in Windsor could make a huge difference. If it is considered to be in this season, Le Clos will get at least 680 more points.
I remember they announced the swimmer of the year before the Championships last year. I think the points from Windsor should be counted in at least one season, or there is no need to specify it in the points system table.

Windsor points do not count towards the 2017 award from what we’ve been told.

Jared, and that counts nowhere? It would be insane.

Now if they can only do it in an Olympic year.

Caeleb will be ready

Well deserved to both athletes! I think the proximity of the points really speaks out to how much swimming has come and is progressing. I mean, Peaty had a PHENOMENAL year, and he gets 2nd! It’s really great to see so many athletes doing so well.