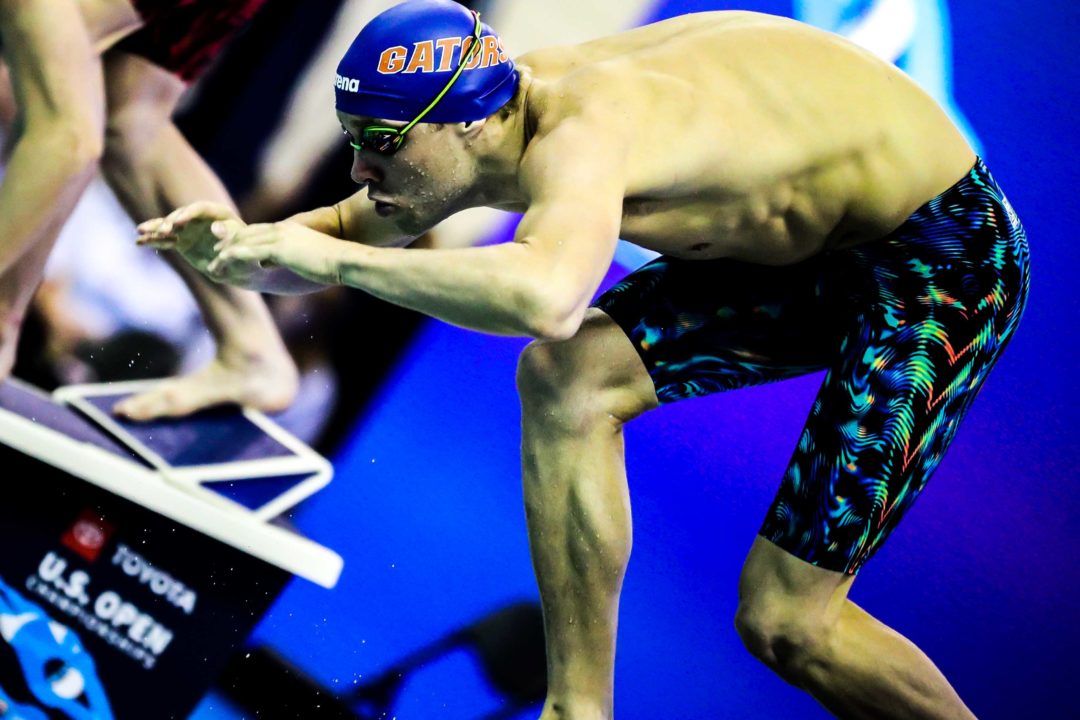 It was an explosive first week of major conference championships. We count down our top 10 swims of a week including SECs, ACCs, and Big Tens. Archive photo via Jack Spitser/Spitser Photography

Four of ten NCAA major conference meets are out of the way this week after a dizzying weekend of fast swimming. We count down our top 10 swims of the week.

It’s always hard to pare down these lists, and we had several top contenders just outside our top 10, including the fourth-ever sub-19 swimmer from a mid-major school, and a couple of swimmers ranked #4 all-time.

The women’s ACC 200 breast was notable for the times, but probably even more notable for the race. Two freshmen and a sophomore from one of the nation’s most heated school rivalries battled for the title, putting up the nation’s top three times this season by a wide margin. NC State’s Sophie Hansson went 2:05.59 for the win despite sitting third at the halfway point. That was a drop of six tenths. Virginia freshman Ella Nelson capped off a huge meet with a 2:05.68 for second, dropping 1.6 seconds and breaking the National Age Group record for swimmers in the 17-18 age group. Meanwhile fellow Virginia freshman Kate Douglass was 2:05.89, leading the first 150 and moving to #3 all-time in the 17-18 age group.

It’s a second-straight appearance for UVA freshman Kate Douglass, who won the ACC 200 IM title in her first-ever individual event at ACCs. Douglass was 1:52.89 at mid-season, but cut a second and a half to go 1:51.36 for the win. That’s the 4th-fastest 200 IM ever swum, and puts her within seven tenths of the American record. It’s also a National Age Group record in the 17-18s and would have placed second at NCAAs last year.

Beata Nelson’s own track record probably hurts her standing here. The senior Nelson was 49.70 leading off (and completely carrying) Wisconsin’s 400 medley relay at Big Tens. That’s tied for the #4 swim of all-time, and Nelson now owns the 1st, 2nd and 4th-fastest swims in history in the event. Had she not swum American records of 49.67 and 49.18 last season, Nelson’s Big Tens swim would have been a hundredth off an American record. Her swim also allowed Wisconsin to be 2nd at Big Tens in the 400 medley relay despite their other legs ranking 6th (breaststroke), 4th (butterfly) and 5th (free) in the conference.

Texas A&M’s sophomore Shaine Casas cut a full second from his best time in the 200 back, breaking Ryan Lochte‘s SEC meet record and moving to #4 all-time in that race. Casas didn’t even swim this race at NCAAs last year, but is coming off of a breakout summer in the long course 100 back. Casas leads the nation in this race now and his swim was the 6th-best in history, behind three Ryan Murphy races as well as one apiece by John Shebat and Austin Katz.

Easily the fastest event in the women’s NCAA right now, the 100 fly is a slugger’s row of superstars. Tennessee senior Erika Brown won an early cross-country battle against Michigan’s Maggie MacNeil, going 49.38 to win the SEC title. (MacNeil was 49.42 to win Big Tens). Brown moves to the #3 performance of all-time, and is just a tenth off the NCAA record of 49.26. She owns the American record. Brown also gets major credit for two swims that didn’t make this list: a 21.03 in the 50 free and 45.83 in the 100 free, both ranking her as the #2 performer all-time.

The big dropper of the year has been Alabama sophomore Rhyan White. Coming into the season, her best times were 1:53.54 in the 200 back and 52.08 in the 100 back. But at SECs, White blasted two of the fastest 200 backs in history, going 1:48.06 in prelims and 1:48.15 in finals. Those rank as the #6 and #7 swims in history in an event where the top performers of all-time have typically not put up multiple top-ranked swims. In fact, the top 10 swims in history come from 7 swimmers, and White joins Kathleen Baker as the only swimmer with multiple top-10 swims. White also cut her 100 back to 50.02.

What is it with the Big Ten and relay leadoffs? Sophomore flyer Maggie MacNeil blew out the fastest 50 back leadoff split in history, going 23.05 on the front of Michigan’s 200 medley relay. Previously, the fastest swim on record was a 23.36 from NCAA backstroke champ and Olympian Rachel Bootsma. MacNeil’s split gave Michigan a lead of almost a full second from the field, and would provide about the same margin if she can do it again at NCAAs. Michigan went on to break the pool record despite having the field’s 7th best fly split.

It’s hard to pass up a swim that took six seconds off the best previous swim in history. Florida sophomore Bobby Finke went 14:12.08 to win the SEC 1650 free. That’s 6.2 seconds better than former American record-holder Zane Grothe, and more than ten seconds better than former NCAA record-holder Clark Smith. Finke’s previous best was 14:23.01, set last year at SECs, and prior to that, he was 14:37 out of high school. Finke has a chance to take this record to extraordinary levels, and his current pace of time drops is nothing short of incredible.

#8 – Beata Nelson is incredible, don’t get me wrong. But I feel like every time you guys talk about her, you are also knocking the Wisconsin team. Yes, without her the relay probably wouldn’t gotten 2nd, but it’s not like she was dragging dead weight behind her. Those girls read this too, and they work just as hard as anyone.

#6: Erika Brown swam like a bat out of hell.

I thought that was a big tongue-in-cheek.

I would include the William and Mary sprinter who popped a 18.9 in the 50 to take the top spot in the country so far

You know how this crowd is. If it wasn’t Dean Farris then it didn’t count.

Brooks Curry with a 41.81 100 free should’ve made this list. He was 44 mid coming out of HS and stepped up to take down SEC heavyweights in that final. He is the real deal

That was a great swim and an exciting race to watch. The coaches’ reaction after the swim was so awesome too. But the swims on this list were all among the fastest in history, so I don’t really think that swim should replace any of the 10 on the list. It’ll be great to see how fast he swims at NCAA and in his remaining years at LSU!

Is there footage somewhere of the race/reaction?

Not sure. I’ll link to it if I can find it. He was fist pumping and shouting and walked across the bulkhead to celebrate with the other coaches. It was fun to watch.

Yes! That was the fastest split in history.