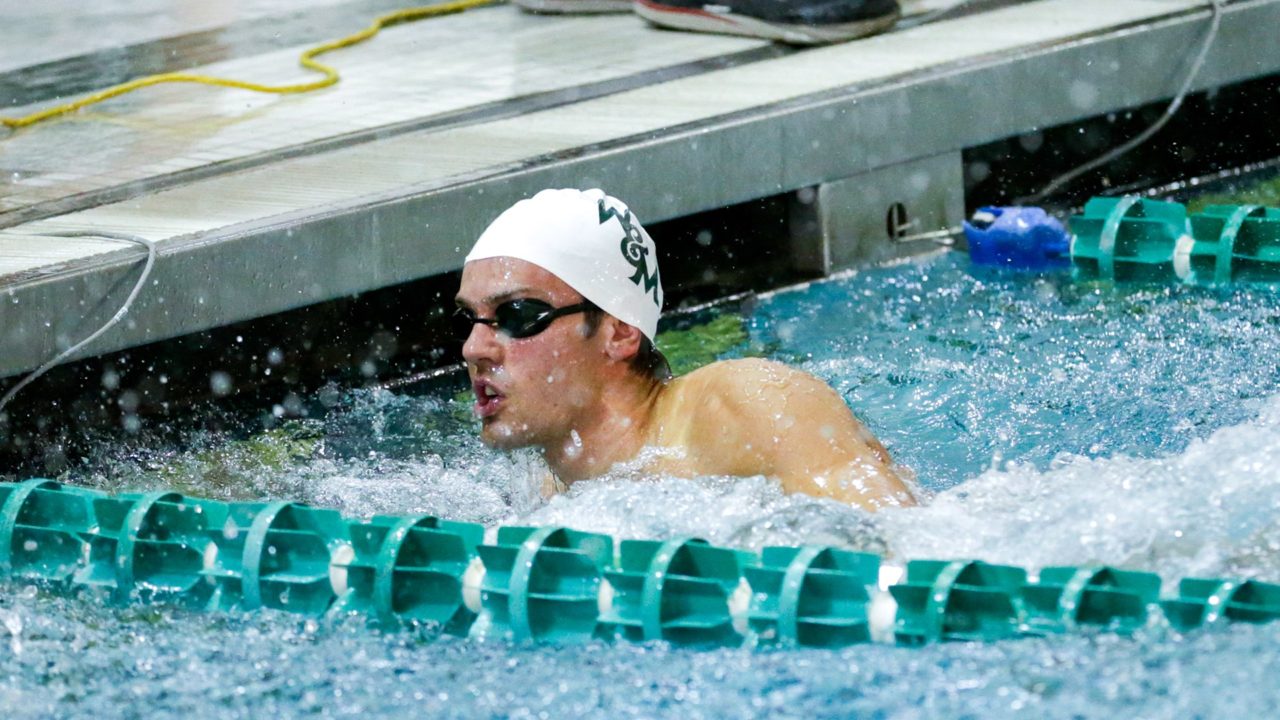 William & Mary senior Colin Wright is expected to be his school's first male swimmer to qualify for the NCAA Championships since 1963. Archive photo via William & Mary Athletics

William & Mary senior Colin Wright led off his team’s winning 200 free relay on Saturday in 18.98 en route to a 1:17.42 victory at the CAA Conference Championship meet on Thursday. That is an NCAA “provisional qualifying time,” and a new CAA record for the relay. Once confirmed, he will be the first appearance for the William & Mary men’s team at the NCAA Championships since 1986, when diver Shawn McLane took 15th in 3-meter diving; and their first swimming appearance since Ron Good swam the 50 and 100 free at the 1963 NCAA Championships.

Not only did that re-break his own Conference Record of 19.17 that was set in the individual 50 free prelims, it took a probable NCAA invite and turned it into a definitive one, dipping well under the 19.35 that qualified for last year’s NCAA Championship meet in this event.

The swim also set a Christiansburg Aquatic Center pool record. The old mark was set at 19.11 by Alabama’s Kristian Gkolomeev in 2014, the season after he won the NCAA title in the 50 free.

The time ties Wright with Cal’s Ryan Hoffer, the defending NCAA Champion in the event, as the fastest time in the country so far this season, with still several big conference championship meets to go.

With a total listed enrollment of 8,817, William & Mary is also the smallest school in the country to ever have an undergraduate swimmer go under 19 seconds in the 50 free. That honor previously belonged to Righi at Yale.

Wright ties former USC swimmer Santo Condorelli as the 36th-best 50 freestyler in NCAA history, and William & Mary becomes just the 19th NCAA school to have a swimmer split sub-19 in the 50 free.

The William & Mary 200 free relay would need to drop a few tenths more to hit the automatic qualifying time of 1:17.17.

This kid was coached and mentored by current Princeton coach Matt Crispino! Can’t wait to see what they go!

If this guy goes under 18.50 I’m eating TWO sandwiches. unreal

So proud of Colin! Great programs develop great swimmers, and this is one example. Go Tribe! Such a fantastic team!

The article never talked about him winning. Just that he broke 19.