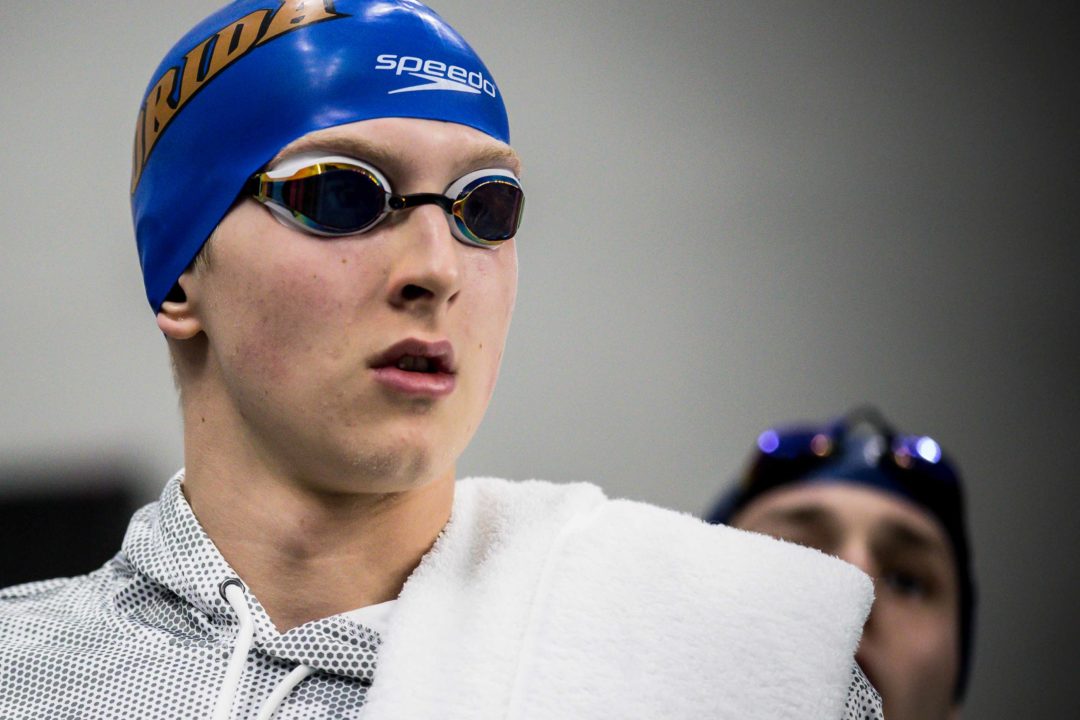 The Florida Gators geared up for night 1 of the 2020 SEC Championships on Wednesday. Kieran Smith had a historic swim on the first leg of the 800 free relay. Archive photo via Jack Spitser/Spitser Photography

The Florida Gators geared up for night 1 of the 2020 SEC Championships on Wednesday, with swimmers competing in the 200 medley relay and 800 free relay. Kieran Smith had a historic swim on the first leg of the Gators’ 800 free relay. Smith raced to a 1:30.11, blowing away his best by 4 seconds. That makes him the 4th fastest man in history, moving ahead of 2019 NCAA Champion Andrew Seliskar. His swim was also the 4th fastest performance ever. You can watch the race here.

Smith smashed the former Florida school record, which was set by Shaune Fraser at a 1:31.70 back in 2009. Fraser was a 2-time NCAA Champion. This leads to some options for Smith’s individual lineup. Last year, he opted for the 400 IM, but he’s easily in the title conversation for the 200 free NCAA title. He’s the fastest man currently in the NCAA, as Harvard’s Dean Farris, who set the American Record last season, is taking a redshirt this year. Last season, Smith was the 400 IM runner-up at the SEC Championships and scored in the NCAA B final.

As a former teammate of Kieran’s I can confirm the only thing he is better at than swimming is Mario Kart. Although he could never beat me, of course.

8
-1
Reply
Austinpoolboy
Reply to  How much can CD bench?

8
-1
Reply
Horninco
Reply to  How much can CD bench?

Not sure these SCY times will convert to LCM 1:44’s

Would be nice though.

If “being worried” means thinking the USA does not have a guaranteed path to gold, then I wouldn’t stop fretting.

While I definitely agree with you, if you’re going with generous splits Haas should be faster since he’s split 1:43 fairly recently.

Lochte is certainly interested ….not sure about Dressels schedule though

Kibler may be in the mix. And Dean may be going pro after Tokyo…if he doesn’t directly ascend unto the heavens

He’d have gone pro now if he wasn’t swimming NCAA next year. Luckily for us and his future, he wants to graduate from Harvard. He’ll probably be head of Space Force as captain of the Enterprise after he cures some disease and unites the five kingdoms

What else is my mans swimming

Dean took a redshirt and Smith said “Fine, I’ll do it myself”

I can’t believe Simon Burnett is 8th now. That legendary record stood for quite awhile, with a 1:31 considered to be a freak of nature swim when it happened. Along came Haas and now we see sub 1:31’s or better every year. It’s amazing how competitive the sport has become.

All it takes is one man to break the mold. Haas is the guy who doesn’t/didn’t let outside noise dictate what he was capable of.

Once you get past that and prove it can be done, more people follow.

Does that mean future generations will all sport dad bods?

No. They will sport Dean Bods. As it should be.

We are made in his image.

What’s even scarier is that he probably has more in the tank for NCAAs, I’m pretty sure this is the fastest swim outside of that meet.

Everyone allegedly has more in the tank for NCAAs until they swim slower at NCAAs. I hope he swims faster at NCAAs but I’ll be surprised if he does.

What’s the use of tapering for conference meets? If I was the coach I wouldn’t care about that meet and I would focus only on NCAAs. If you make your swimmers swim 1 second slower at NCAAs than 3 or 4 weeks earlier you look really idiot. Swim fast when it counts the most.

Bobo, the cuts for NCAA’s are pretty fast. Not everyone can just focus on the big meet (actually, most everyone can’t).

he still has to learn those swimming tips as a fan …..

Kieran… you slay me