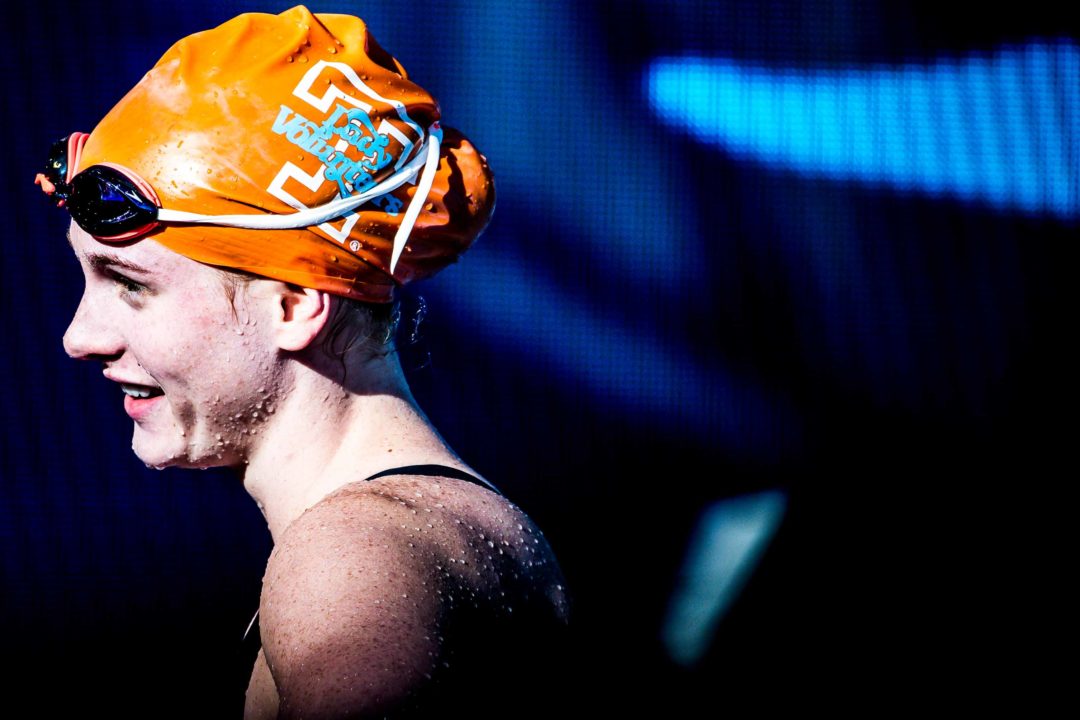 Though the Texas A&M women (who joined the conference in 2012) have won the last 4 titles in a row, they have some big shoes to fill from graduations. This year, the Tennessee Volunteers look like they’ll be very tough to beat. The Tennessee women could earn their first women’s SEC title in program history.

Erika Brown is one of the front-runners for Tennessee. She won all of her events last season and has a good chance to accomplish that feat again. Brown is already within striking range of a couple of NCAA Records this season. Meghan Small is extremely versatile and has 2 individual SEC titles to her name. They also return every member of their relays from last season except for one.

Though A&M is now without last season’s seniors, including SEC Champion Sydney Pickrem, they still return several finalists. Anna Belousova is the defending champion in the breaststrokes. Jing Quah and Haley Yelle should also bring in a lot of points for the Aggies.

Last season, the Florida women performed significantly better than in 2018, jumping all the way from 7th to 2nd in the team standings. They also return most of their top scorers. They should bring in plenty of points in the distance events, as is typical for the Gators. The freshman class performed very well last season. They have a lot of event title potential from their sophomores with the likes of Leah Braswell and Vanessa Pearl. Now in her senior season, Sherridon Dressel will also be challenging for gold. The Gators will be fighting for their first title since 2009.

Based on the way things have gone so far this season, Georgia is also in the title conversation. Freshman Zoie Hartman is a title threat in all 3 of her primary events. Courtney Harnish is a defending champion for the Bulldogs, and they’re deep in the butterflies, led by Dakota Luther. Before the Aggies won their first title in 2016, the Bulldogs had won 6 titles in a row.

Rhyan White (sophomore backstroker), Kensey McMahon (sophomore freestyler), Flora Molnar (junior sprinter), Alexis Preski (senior fly/IM/freestyler) – As freshmen, White and McMahon were among the team’s top scorers in 2019. McMahon is a returning mile medalist, while White leads the SEC in the 200 back this season. Molnar has championship final potential in the sprints. The team will compete in its first championship under Coley Stickels.

Anna Hopkin (senior sprinter), Peyton Palsha (junior freestyler), Brooke Schultz (redshirt junior diver), Maha Amer (sophomore diver) – Hopkin is gunning for the sprint titles and is tied as the fastest 50 freestyler in the SEC this season. Schultz and Amer should rack up big points on the boards.

Leah Braswell (sophomore freestyle/IMer), Vanessa Pearl (sophomore breaststroke/IMer), Taylor Ault (junior freestyler), Sherridon Dressel (senior backstroker), Kelly Fertel (senior IMer), Talia Bates (freshman sprinter), Brooke Madden (senior diver) – The Gators return all of their top scorers. SEC Champion Braswell and bronze medalist Dressel should bring in a big points haul. Pearl has a great shot at the IM titles. Freshman Bates should help them out a lot in the sprint department, especially on relays, though she’s dealing with an undisclosed injury and may not be available.

Courtney Harnish (junior freestyler), Dakota Luther (sophomore butterflier), Veronica Burchill (senior sprinter), Sophia Carnevale (senior breaststroker), Gabi Fa’amausili (junior sprinter), Zoie Hartman (freshman breaststroker) – Luther should bring in a ton of fly points, even in the absence of the transferred Olivia Carter. Burchill has been a key player for UGA in the sprints and relays throughout her NCAA career and is one of 3 returning 70-point scorers. Harnish is another reigning champion and a threat to win multiple events. Freshman Hartman leads the SEC in both breaststrokes this season.

Katarina Milutinovich (freshman back/freestyler), Niamh Robinson (freshman breaststroker), Cassie Kalisz (junior backstroker), Summer Stanfield (freshman IM/freestyler), Olivia Taylor (freshman sprinter), Olivia Pasculin (senior breaststroker), Aimee Wilson (sophomore diver) – LSU graduated a lot of its top scorers last season, but their freshman class has a lot of scoring potential. Milutinovich will be a key player on their relays. Robinson is ranked in the SEC top 10 in both breaststrokes, while Kalisz is #10 in the 100 back. Wilson should rack up plenty of diving points.

Albury Higgs (senior breaststroker), Christina Lappin (senior sprinter), Emily Cornell (senior free/backstroker), Melinda Novoszath (sophomore free/butterflier) – The Gamecocks will have to make up for graduating Emma Barksdale, but they do have a couple of returning finalists. Higgs is a returning 200 breast finalist, while Cornell is a returning 200 back finalist.

Erika Brown (senior sprinter), Meghan Small (senior everything), Stanzi Moseley (senior freestyler), Tess Cieplucha (senior IMer), Nikol Popov (junior breaststroker), Amanda Nunan (junior freestyler) – Brown was the SEC Champion in all of her events last season. She’s poised to accomplish that again, but will battle Hopkin in the sprints. Small is another SEC Champion for the Volunteers. The senior class is loaded for the Volunteers as they race for their first ever women’s SEC title.

Anna Belousova (senior breaststroker), Jing Quah (junior butterflier), Katie Portz (senior freestyler), Taylor Pike (junior butterflier), Haley Yelle (junior freestyler), Emma Stephenson (freshman fly/freestyler) – Texas A&M will have to make up for the loss of quite a few finalists to graduation, including SEC Champions Pickrem and Rasmus. Belousova is the defending champion in both breaststrokes. Yelle and Quah are also among their returning finalists.

Sprint Freestyles: Tennessee’s Erika Brown and Arkansas’ Anna Hopkin will go head-to-head in the sprints. In the 50 free, Brown is the SEC Record holder and was briefly the NCAA Record holder last season. She’s been within 4 hundredths of her best this season, and is currently tied with Hopkin in the SEC rankings. Missouri’s Sarah Thompson and Auburn’s Claire Fisch are also medal favorites. Brown is also the SEC Record holder in the 100. Hopkin has broke into the 46-mid range this season, but Brown came very close to breaking 46 at midseason.

100 Back: This event includes 6 returning finalists from last season. Kentucky’s Asia Seidt, the 2018 champion in this race, was the runner-up last season by a hundredth over Florida’s Sherridon Dressel. Missouri’s Haley Hynes is the only woman in the SEC to have broken 51 this season. Alabama’s Rhyan White has been 51-low with a time that would’ve placed 2nd last season. Kentucky’s Caitlin Brooks and Missouri’s Sarah Thompson are also in the medal conversation with times in the 51-range.

200 IM: Tennessee’s Meghan Small is the reigning SEC Champion in this event, having won in 2017 and 2019. Small, the SEC Meet Record holder, is ranked 2nd in the SEC this season behind Georgia’s Zoie Hartman. As a freshman, Hartman is the only woman under 1:54 in those rankings. Kentucky’s Asia Seidt, the 2018 silver medalist, and Florida’s Vanessa Pearl are also in the title hunt.

Swimulator shows the Volunteers taking it by nearly 100 points over Georgia. Florida is in the 3rd slot, just 20 points ahead of Kentucky. The defending champion Aggies are in 7th, 5 points ahead of host Auburn. It’s important to note that Swimulator assigns points based on in-season national rankings. Relay points could shift significantly, while diving is not taken into account in these standings.

The Swimulator rankings are about on par with our expectations. Tennessee seems to be the favorite going into this one, but Florida and Georgia can’t be counted out. The Gators are nearly 300 points behind the Volunteers in the Swimulator rankings, but they typically perform significantly faster at SECs than at their midseason invite. Relays and diving could be key in what should be a tight battle between the two for the runner-up spot, but Tennessee is our pick to win it.

Kentucky’s backstroke depth could push them past A&M, but the Aggies’ top swimmers should also perform significantly better than their Swimulator points. They’re ranked 7th based on midseason points, but it would be surprising to see them fall out of the top 5. Missouri, Kentucky, A&M, and Auburn could all be fighting for a spot in the top 5. The Tigers’ home pool advantage could help give them an edge.

It’s fun to see what stars can do, but this meet comes down to depth, and who down the bench can fill out B&C finals, and the surprises who can sneak into A finals. Which team has that depth this year? Will be fun to watch!

Tennessee Lady Vols look REALLY strong!! Didn’t realize how much depth they have to go along with Erica Brown, Megan Small and Tess Cieplucha. I don’t see any other team coming anywhere close to them at SECs.

Tennessee’s Amanda Nunan has been on fire the past few weeks. 2nd in NCAA 1000 unsuited. Her mile seed does not reflect the big drops on 1000 and 500 recently. If she can reproduce has a good shot at 1650 SEC win and high points in 500.

@VFL – maybe you should take the hint and stop asking about Sinclair Larson. Obviously someone does not want you to know! Anyone that has followed UT meet results can tell you that she has not been swimming since last fall, so I am not sure why Lauren included her in the article. However, there are several other Lady Vols that should be and they will make all the difference! This team wants it badly!

Got it—I’ll stop seeking swim news on the only swimming news website with fan activity.

Everyone get ready with coonskin cap

Uhhh…. it’s not “said & done” quite yet. Vol women were the favorites last year as well & you can look up the final result (I know it was a “gut wrencher” & it may not bring back real good feelings but …). Might get those caps ready but I wouldn’t necessarily put them on quite yet👍👍

SWIMSWAM READERS:
Do you like what Swimswam did in this article by color-coding the paragraphs based on the team?
Upvote: Yes
Downvote: No

They’ve done that for at least the last two years.

Sorry this is off topic for this article but there no great place to put it: are we gonna be getting regular updates on the MIAC meet from Livestream Andy? Please say yes!