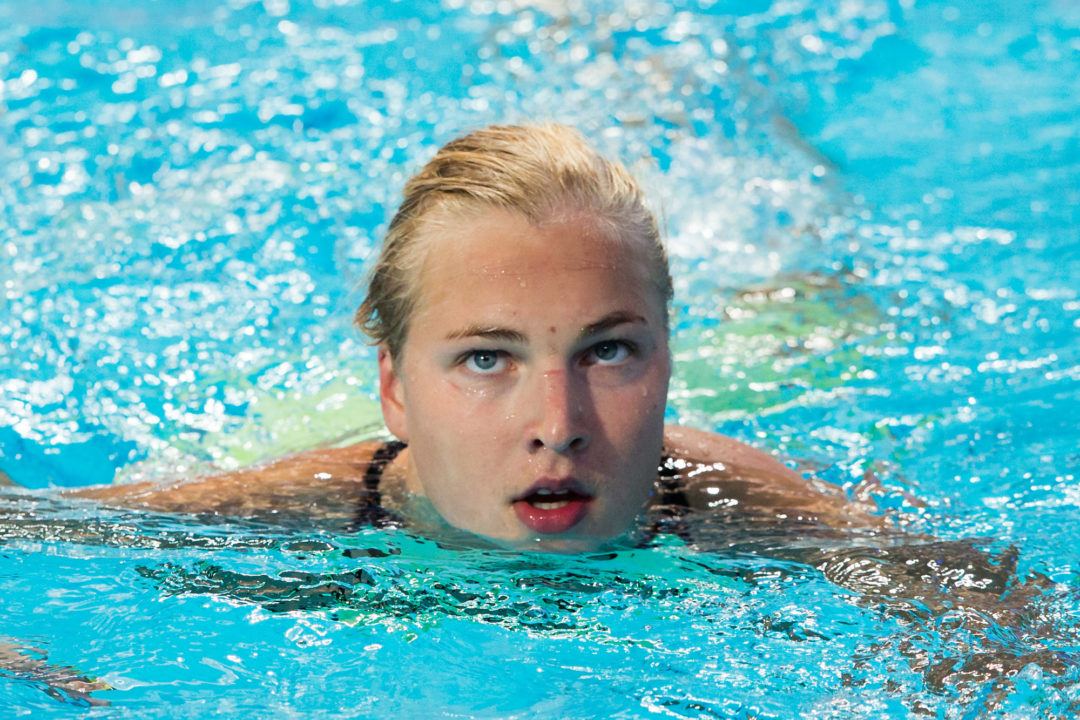 FINA announced Meilutyte's suspension this week, even though the hearing was held in July of 2019. Meilutyte announced her retirement in May of 2019. Archive photo via Tim Binning/TheSwimPictures.com

FINA has announced a 2-year suspension for Olympic gold medalist Ruta Meilutyte, which is back-dated to July of 2019 for missing 3 anti-doping control tests in a 12-month period. The suspension dates to July 21, 2019, the day of the anti-doping hearing, and will end on July 20, 2021.

During the hearing, Meliutyte took full responsibility for the missed tests, saying that she was taking time off from swimming and travelling in Lithuania and simply failed to update her whereabouts correctly. She requested that she be given a 12-month suspension that would allow her to return before the Tokyo Olympics, which she says are “probably going to be my last Olympics.”

“I would be grateful if I could still have the opportunity to go to Tokyo.”

In a follow-up letter, Meilutyte said that “I had simply been inattentive with ADAMS system for the last year because I was in the process of retiring from the sport.” ADAMS is the system where athletes inform testing authorities of their whereabouts. That follow-up letter did express a possible interest in returning to swimming in the future via asking a question of how the suspension would be viewed in light of her retirement.

FINA ruled that there was no flexibility where “a pattern of last-minute whereabouts changes or other conduct raises a serious suspicion that the Athlete was trying to avoid being available for Testing.”

This statement is significant because the hearing happened in July – 2 months after Meilutyte announced her retirement from swimming. Meilutyte said that she was battling severe depression that was driven in part by the pressure to continue her success after the 2012 Olympics. Her then-coach Dave Salo, based out of American university USC, said that she took a ‘leave of absence’ from swimming after the 2018 World Short Course Swimming Championships, which was her last meet on record.

According to World Anti-Doping Code rules, Meilutyte would have to make herself available for testing for the balance of her 2-year suspension (public information indicates that she didn’t serve any of that suspension) before being eligible to compete in International Events or National Events.

The 22-year old Meilutyte burst onto the international swimming scene at the 2012 Olympic Games when she was 15-years old, winning gold in the women’s 100 meter breaststroke. At the time training in the UK under Jon Rudd, she was the youngest Lithuanian to ever represent the country at a modern Olympic Games. She had mixed success in the remainder of her career, facing a number of injuries, with highlights including winning a 2013 long course World Championship gold medal in the 100 breaststroke in a World Record-breaking time.

As I mentioned before, I take full responsibility for the missed tests. I’ve been on Adams for the last 7 years of my swimming career and always took a responsibility as an athlete to promote clean sport, never got a positive test. Last year I was traveling a lot ‐ my two missed tests happened on April 2018 and March 2018 as I was traveling from one country to another. August 2018 ‐ I was having time off after main summer competitions, I was travelingin Lithuania and I failed to update the whereabouts correctly. I kindly ask you to consider my situation. If 12 month suspension is given to me ‐ I could stillpursue my goal to compete at Tokyo 2020 Olympics, which is probably going to be my last olympics [sic]. I would be grateful if I could still have the opportunityto go to Tokyo. Thank you.

Dear Johan Lefebvre,
Thank you for the letter from Mr. Fox.

In response to his letter- I have no further arguments against this case, like I’ve said before, I take full responsibility for missing the tests, I had simply
been inattentive with ADAMS system for the last year because I was in process of retiring from the sport. I didn’t do my whereabouts as diligently as before, I was traveling a lot. As for the hearing in Switzerland, I had assumed that I will just be attending it through a video chat, I understand that was not made clear by me. I accept the composition of this FINA Doping panel to make decisions on my case.

I also have a question. I have come to a decision to retire from the sport of swimming. I am still on Adams system, but I would like to leave it now because I am not swimming anymore, I don’t want to miss any more tests. If I receive suspension when I’m officially retired, does the time of suspension count, or do I need to be on Wada Adams system in the period of the suspension? (if that makes sense) Because the Anti-doping of Lithuania have told me that if
I retire and leave Adams system now my suspension time won’t be counted unless I register to Wada Adams system again and officially become a
swimmer again. Is this true?

Thank you, I hope you understood my question.

In accordance with DC 10.3.2 for violations of DC 2.4 the period of
ineligibility shall be two years, subject to reduction down to a minimum of one year, depending on the Athlete’s degree of Fault. The flexibility between two years and one year of ineligibility in this rule is not available to Athletes where a pattern of last-minute whereabouts changes or other conduct raises a serious suspicion that the Athlete was trying to avoid being available for
Testing. It is the FINA Doping Panel’s position that the athlete was very slack with the management of the information relevant to her whereabouts, but that no evidence pointed to any pattern, nor did the Athlete, who has the burden of presenting evidence to the Panel to obtain a reduced sanction, provide any explanation which the Panel could consider as rebutting a pattern which could nallow it to envisage a reduced sanction.

The world record wasn’t set in London Olympics. She broke the suit record of Hardy next year at WC in Barcelona.

I hope she is doing well and taking care of herself.

Didn’t she swim at Trojan too?

Does she really want to compete in Tokyo? Since her incredible success in London and Barcelona the very young teenager with the history of tough childhood was under huge pressure from adults who directed her life including but not limited by her coach and her federation. It wasn’t a happy ended Cinderella story. She may feel some nostalgia to be Olympian one more time, but if money isn’t an issue, the retirement, I think, was a right decision.

Salo was her coach? That’s too much of a coincidence…

Yes. The 5th coincidence? The 10th coincidence?
I have in mind Efimova, Glaesner, Lobintsev, Morozov, Martynova, Mellouli and Hardy. Maybe a few other cases are missing.
Imagine if that coach was Chinese….

Why not to tell us what your imagination is? Why should we guess? What stops you to spread rumors? It is so cheap what your are doing.
If you know Ruta used drugs being in competition just tell us that. Where and at what meet she competed dirty?

Salo is a great person and coach. I do however think his focus is on getting swimmers to go fast and he either doesn’t care or doesn’t want to deal with what’s going on outside of the pool. Another note: how many of the people who have failed tests have been from Former soviet bloc countries? I’m aware that there are Americans under him who have failed tests as well. It may just be that there’s a culture that’s been created on the team by the pros who are there. It’s hard to uproot once it exists.

The fish rots from the head. If the coach doesn’t care whether or not his athletes are clean and creates an environment in which clean sport is a priority for everyone involved, I don’t think he has any business coaching. I understand that Salo is considered one of the best coaches in the world and it’s controversial (at best) to say this but a coach works so closely with his athletes… he has to know when they’re taking something. And if he really doesn’t – who wants to train under a coach that wouldn’t notice?

Mellouli and Hardy trained under Salo and tested positive before the Russians came. Shouldn’t always blame everything on Russia. If there’s some culture, It’s already created long long ago and Salo definitely has some responsibility for that.

This is one of the few cases where I think the excuse is not only plausible, but probable. Having Salo in the picture is unrelated, IMO, I think she really was just done and neglected to update her info. The two year suspension is still totally fair, though. If you’re going to be a professional, be a professional. If you’re going to retire, retire. Don’t mess around and miss doping tests and put a stain on your legacy.

12
-13
Reply
NOT the frontman of Metallica

So… 2 years for missing tests, I find that completely reasonable and I applaud her for taking responsibility for it herself.
But how on earth can testing positive for performance enhancing drugs like Schoeman only give a 1 year ban compared to missing tests?!?!

Yeah…seems to me that the punishments are incentivizing athletes who miss a test to just take banned substances and get a shorter test.

This is becoming ridiculous.