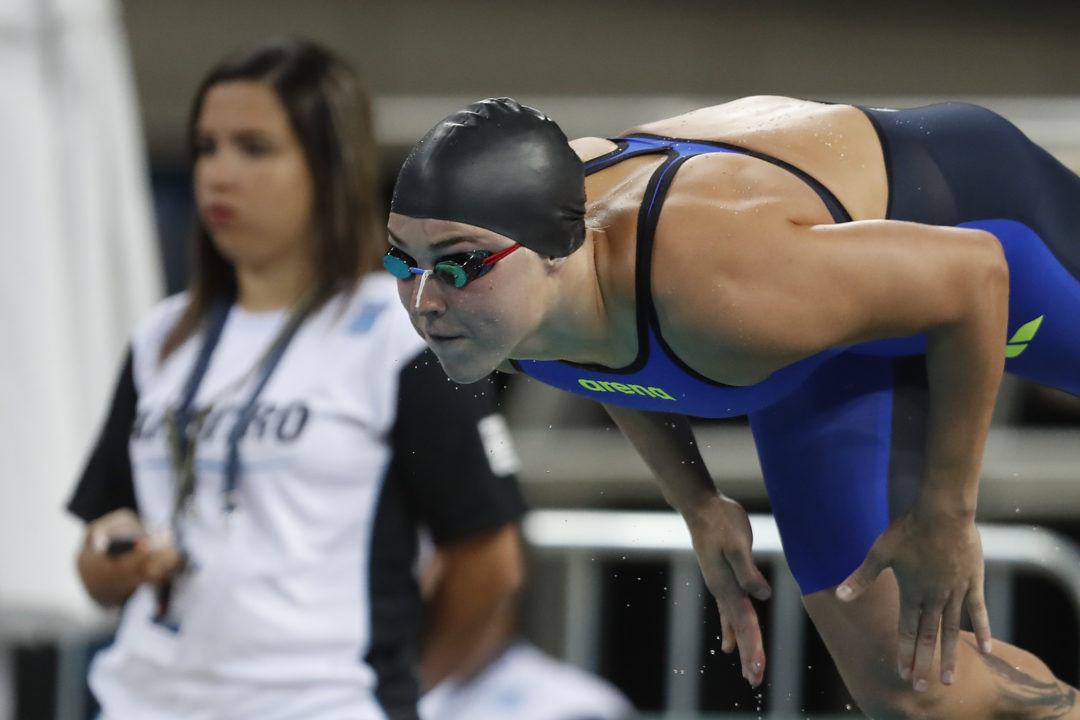 2012 Olympic champion Ruta Meilutyte says she considered giving up on swimming after the 2016 Olympics. Current photo via Satiro Sodre/SS Press

Ruta Meilutyte has been in the public eye ever since she came out of relative obscurity to win Olympic gold in the 100 breast in 2012 at the age of 15.

She told Brazilian site Globo Esporte Thursday that she was deeply affected by the pressure to continue her success and the persistence of the media in the wake of those Olympics. Meilutyte, now 21 and representing Flamengo at the 2018 Brazil Trophy in Rio de Janeiro, says she has been suffering from severe depression since 2016.

“I have depression and I fight every day against it. It’s a battle. With the help of my family and friends, I found ways to deal with it and feel better,” she said. “But I’m not free and I feel I still have to work to get out of it.”

Meilutyte attended the 2016 Olympics and took 7th in the 100 breast while still rehabbing her elbow, which she broke in 2015. Her depression was at its worst after the Olympics, and she says she almost gave up on swimming because of it.

“At that time, I was not happy with myself and at the same time had to go on with life and produce good results, ” she said. “I went into deep depression. It was the lowest point I went through.”

“Sometimes I wondered what I was doing with my life, because everything seemed meaningless,” she continued. “It was a loss of the perception of things, that made me discard the positive side of my life and focus only on the negative. And then I did not want to train or see people.”

Since those Olympics, Meilutyte left her old coach, Jon Rudd, and had been exploring various coaching options until she recently landed on Dave Salo in Southern California. You can find out more about her Rio experience in her new movie, Ruta.

Meilutyte is certainly not alone voicing her experience with mental health. Michael Phelps and Allison Schmitt have been vocal about their own struggles recently, as well as Australian Grant Hackett, just to name a few.  Meilutyte pointed out that the number of athletes with depression is “more normal than people think.”

“It’s not something we should be afraid to talk about. Many athletes are afraid it sounds like an excuse,” she said. “But for me, it was important to talk about my experience.”

When it comes to the future, Meilutyte is intent on making another Olympics, but is not putting pressure on herself to return to pre-2016 form. She is exploring events outside of breastroke, and will race a 50 free in addition to the 50 and 100 breast (which she won in 1:07.35) this week.

“Today, I am more aware of what I can do, what I do, and what I feel. Everything happened so quickly and it was so overwhelming that I could not control it. I’m ready for anything,” she said.

Left alone to carry the Happy petard is Lily King , always a ray of sunshine .

No, Lilly felt deflated after Rio. So much excitement and euphoria, and then back to college life.

But her coaches and teammates nudged her out of it. In 2017, she set a WR in the 100 breaststroke, making good on her stated goal for the season. It was an incredible swim – out fast and then powered home the final 25 for the WR.

Until Penny Haynes says something I will think she had general troubles eg in training & loss of motivation , yet she pulled herself back . I cannot remember who won the 100 in 92 but the 14 year old Japanese 200 winner received death threats ! So there is definitely more when we talk of female breastrokers.

I was having a little joke re Lily as you ought to have figured in the ‘ happy petard’ but why not go light on such a serious disturbing subject?

A common theme among olympic athletes I know, is depression. It’s really hard to repicate the high from making and competing in the Olympics and everyday life seems to be unfulfilling. Not that that’s uncommon in non-olympians

Yes, and in some cases, it can be even worse for elite athletes who barely miss making the Olympic team by a fraction of a second. Finishing 3rd in your event at the Olympic Trials is the worst … you don’t even get to make the trip to the Olympics and won’t be able to say that you were an Olympian. You have to be an elite athlete to finish 3rd at Trials … but nobody remembers who finished 3rd at Trials. That’s a really tough pill to swallow, knowing that your next chance is a long four more years of grueling work away. A lot can happen in four years.

Depression seems more common among athletes as the article relates. Perhaps the pressure and overtraining changes their brain chemistry, not sure.

I think it also affects high level athletes (like the ones who win Olympic gold) because (and many of them have said this) winning gold at the Olympics is the greatest feeling of accomplishment they’ve ever had and think they’ll ever know, which makes returning to “normal” life very difficult for many of them. Their sport is everything to them and knowing you won’t feel something like that for another four years, or possibly ever again might be difficult to manage mentally.

I wonder if it might be the other way around. It seems plausible that the tendency to put tremendous pressure on oneself could contribute to success, but might also have a down-side.

That’s also a good point, but there’s not one specific cause, especially when it comes to something as complicated as mental health and depression. The only reason I chose to talk about the success aspect is because that is one of the more commonly heard stories among successful Olympic athletes, but for sure putting huge amounts of pressure on yourself is not good either.

I think about how hard it must be to have such amazing success at a young age, right at the moment you are learning what it means to be alive and be your own person. At the moment when you are first finding your identity the entire world tells you “you are great! You are the best!” Must feel like every failure, no matter how minute, you are losing part of who you are. Glad this part of the sport is getting more attention, and grateful that Ruta is sharing her story.

She should’ve change the environment right after Barcelona. It was obvious already in Kazan that her psychological state required gentler and more careful attention. Her training requirements remained very demanding. I’m not sure that she’s found necessary support and guidance at this important point of her life at the age of 18. Rio was a continuation of the problem – not the beginning.

Go away and never come back

Going away from the problem instead facing it and helping a swimmer with the psychological issues that it is a very common attitude. Coaches are the first line of defence. In many cases swimmers trust them more than to close relatives and can tell them very private things that they will never reveal to anybody else. How many coaches are trained and are willing to deal with such problems.
Have you ever heard from Jon Rudd how he had helped Ruta to go through the crisis of gotten beaten by the Cheater at world championships? That is where it started. I haven’t heard anything of such things.