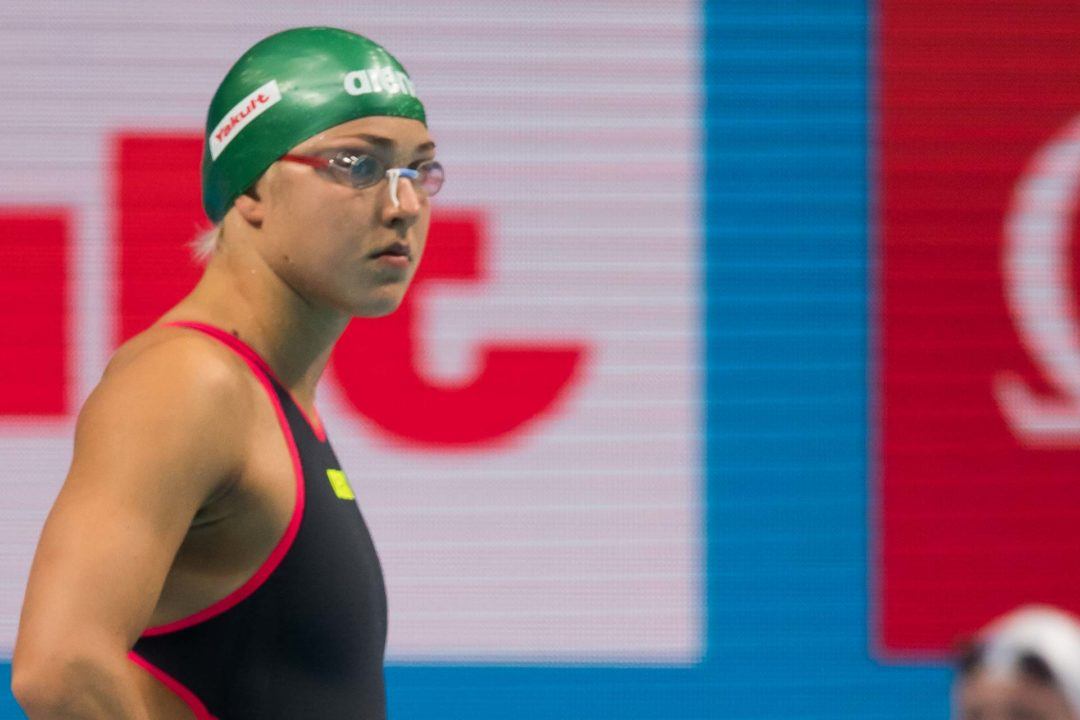 Ruta Meilutyte will try to get her rhythm back under Dave Salo, as the 20-year-old makes the move to Trojan Swim Club. Archive photo via Mike Lewis/Ola Vista Photography

2012 Olympic champion Ruta Meilutyte of Lithuania has made several coaching changes since her gold medal-winning run in London. After her long-time coach at Plymouth Leander in Great Britain, Jon Rudd, moved on to take Irish Swimming’s performance director role, Meilutyte moved back to Lithuania to train under the guidance of Paulius Andrijauskas, a former Olympic butterfly swimmer and the vice-president of Lithuanian Swimming Federation.

That move didn’t last long, however, as the 20-year-old traveled to Australia to take up some temporary training and competition before trying out Team Elite in San Diego for a stint earlier this year.

According to the Lithuanian federation site, Meilutyte is now headed Coach Dave Salo‘s way and will soon be calling the Trojan Swim Club home.

“I tried a few options and it turned out to be the best. I worked for a few weeks, everything is very good there. It’s important that the trainer has a lot of experience working with women who are specifically my style, so I think this choice is correct,” Meilutyte said recently of her trialing the Los Angeles-based training locale.

“I want to focus as much as possible on training sessions, getting ready to rhythm for the most important start of the year, so I’m glad that the decision has finally been taken,” the Lithuanian star said.

As for Salo, he stated, “I have been acquainted with Ruth for many years now when her father asked me about her ability to come to the states for training.”

Salo, who has worked with Olympians Rebecca Soni, Amanda Beard and Yuliya Efimova in the past, said, “I look forward to working with Ruta, and I hope that this will be a great experience for me and for the swimmer. ”

Emilis Vaitkatis of the Lithuanian swimming federation also commented, sharing of Salo, “He does not pay much attention to self-promotion or public relations; his methods sometimes do not receive support or approval from other trainers or swimming specialists, but achievement results, medals or improved records speak for themselves.”

Back in 2016 in the wake of the Russian doping scandal involving the removal of a total 7 swimmers from its Olympic rosters, Trojan Swim Club has, at least temporarily, made a change to its international swimmer policy where foreign athletes were suspended from participating in the Trojan Swim Club’s training program.

Salo told SwimSwam in the aftermath of the Efimova meldonium scandal, “I am suspending any international athletes from Trojan swim club for the near future until we can find a means to assure that anyone that trains with us is above reproach regarding the use of ped (performance enhancing drugs).”

Meilutyte is reportedly moving to California within the next week.

She rolls her eyes now

maybe relatively , in comparison to other places she tried…?