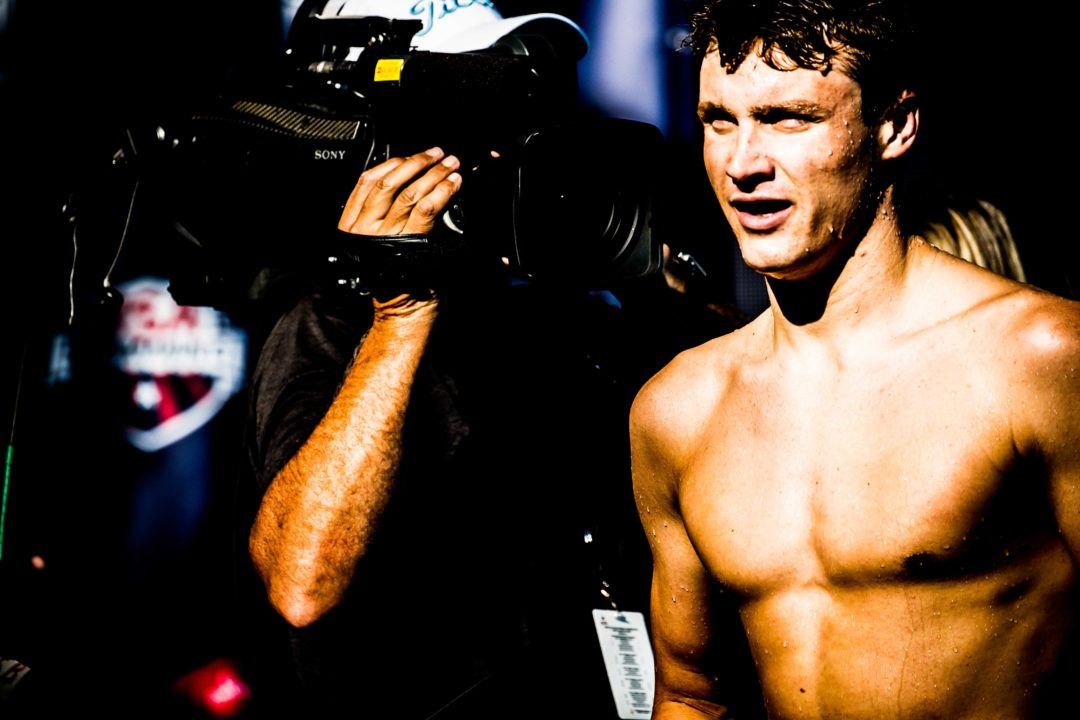 Finke’s swim feels approachable in a way that other races do not. And that’s what made it one of the most beautiful races I’ve seen in a long time. Archive photo via Jack Spitser/Spitser Photography

When watching elite sport, we always imagine ourselves there. You know, I would have found that open teammate, I would have laid off that curveball in the dirt, and you’d better believe I wouldn’t have taken that extra breath right before the finish. Swimming is one of the easiest sports for which to adopt this intrinsic perspective: all of us have won races before, it doesn’t look as fast as it is from above, and speed is relative anyway.

The fantasy does get stretched a little bit by some of the very top swimmers. I don’t watch Caeleb Dressel and think: “Yeah, that’s totally me. I also do that butterfly-stroke-thing on my start because my massive arms are just too powerful to do it any other way. Then after a couple dolphin kicks that rival an actual dolphin’s, I pop up way in front (how convenient!), and just extend my lead until the finish. Sometimes on the last 25 of my 100 butterfly, I’ll just not breathe, because that’s a thing I can do.”

I’ve never had the length and ridiculous turnover of Sarah Sjostrom or muscles on muscles (and ridiculous turnover) of Adam Peaty. I never could dream of Ryan Lochte’s absurd underwaters or Mary T. Meagher’s unrelenting butterfly stroke, and I certainly can’t match the impossible smoothness of Regan Smith or Michael Phelps or Federica Pellegrini or Ian Thorpe.

But that’s not the feeling I got watching Bobby Finke’s 14:12.08 world record* in the 1650 free at SECs this weekend**. The distance events in general, and Finke’s swim in particular, feel approachable in a way that other races do not. And that’s what made it one of the most beautiful races I’ve seen in a long time.

**Unfortunately, only watched the replay and not the real thing

To be sure, I don’t mean that all distance swimmers make me feel this way. Sun Yang was the stallion who sat astride the swimming world. Janet Evans swung her arms high into the sky, summoning Zeus’ thunderbolt to smite her competition. Felix Auboeck does the same thing now, and he’ll take on Finke at NCAAs next month. And let’s agree not to even mention Katie Ledecky.

But Finke’s swim: first, let’s talk about the splits. He averaged 25.82 per 50, swimming fairly even from split to split, but not crazily so. On one hand, whoa! He’s the first ever to average sub-26, and he did so emphatically. But on the other hand, well, many thousands of swimmers can keep up with that pace for a little bit. If you can swim a 50 at that speed, or a 100 (or even a 200 for men), you’re a good swimmer certainly, but you’re not usually a particular standout in the sport. We can plop a decent age-group swimmer next to Finke, and they’ll keep up long enough to say hi. An endless relay of high schoolers could totally take him down.

Plus, can’t you relate to how Finke swam the race, if you add many, many seconds to his time? He went out kind of hard, but wasn’t quite in the lead at the 50. He took over by the 100, and then put down some ridiculous splits as he pulled away: 51-point for each 100 until halfway. Then he started to struggle. The 12 strokes per length became 13, which became 14. His stroke was clearly less powerful than it started out. He would slip in an extra breath before the turn: to the right if he was close to the wall, and to the left if he was farther away. The 51-point 100s became 52s. But Finke kept fighting. His kick was strong throughout, but it really came alive in the second half. His already-high cadence held, and increased. And with more of a gutsy drive than a sprint finish, he hit the wall, more than a full lap ahead of his competition, and half a length ahead of the Grothe ghost he set out to chase. It was, by any standard, an enthralling and beautiful swim.

So how does Finke’s record race differ from how you or I might swim? Well, not much, if you think about it in just the right way. He’s 6-foot-1; that’s not that tall! Certainly not a 6’ 6” beast like Kieran Smith. Sure, Finke’s kick is excellent, his stroke is excellent, his turns are smooth and efficient. Well, of course they are, what did you expect from a world record holder? He’s got that high body position and snappy turnover, which anyone can do, just not for a whole 1650. And he had the same problem we all have when we go out fast: he slowed down.

Finke doesn’t have unbelievable speed: his 500 PR is “only” 4:10.86, and he didn’t make Florida’s 800 freestyle relay. He obviously does have unbelievable endurance, the hardest skill to really feel from behind a computer screen. Plus, we also know that swimmer who’s an even more extreme miler than he is. And Finke has another humanizing mark on his record: last year he swam 14:23.01 as a freshman at SECs, at the time the 5th fastest 1650 ever swum. His NCAA finish a month later? Only 12th.

It makes you almost believe, almost head over to the pool just to check, because what if something crazy happened last night and that’s you now? If I squint until my eyes are closed, I can see myself in his place. The easy speed early in the race, check. The ever-building suffering, the stroke that begins to weaken and flail just a little bit; you build up your kick, you build up your resolve, and you fight against the taunt of your slipping splits, your slipping spirits. But you give it what you’ve got, you give it 100%, because you, like every coach who’s ever tried to inspire, like every swimmer whose glory days are far enough in the past, you will put everything you have into what you already know is the best swim of your life. Bobby Finke swam the fastest time in history this weekend. And he swam it the way I would have done, if only in my own mind.

I want to make one thing clear at the end of this essay: I’m not trying to say that Finke’s swim is any more approachable that any other yards record, or that his abilities are any more human than the superheroes whose legacies he has now been approved to chase. I’m just trying to say that it felt that way to me. I swam every stroke of that race with Bobby Finke. And I celebrated more than he did, because, honestly, I wasn’t even that tired.

You see, I’m pretty sure I could have gone even faster.

Watching this race motivated me to go out and run the fastest mile i have ran in years just so i can say i beat his time. Bike was ready just in case. Amazing swim that boggles the mind and redefines what is possible. Well written article and a joy to read.

I’m concerned Bobby and Kieran are going to do a full taper again for NCAA and mess up their chances at Olympic Trials. Bobby is a great talent and really peaking right now.. would be a shame if he misses the team puts up these type of performances in the 800 and 1500 against the world’s best

I can’t comprehend this race. All I know, is when I saw the time I thought it was a typo…

Nice change of pace. I really enjoyed this!

Would you say Bobby was “full of swimming”?

Livestream Andy with a great article! Awesome analysis with the perfect amount of injected humor. Thank you for this!

Andy, please replace Rowdy as a commentator for distance. You see, I’m pretty sure you could do better

I watched a few of his races, mostly LCM. Bobby is exceptional in maintaining his pace. That’s why he’s a true distance swimmer.

The USA has a scarcity of elite distance swimmers, unlike backstroke where there is a big surplus of talent.