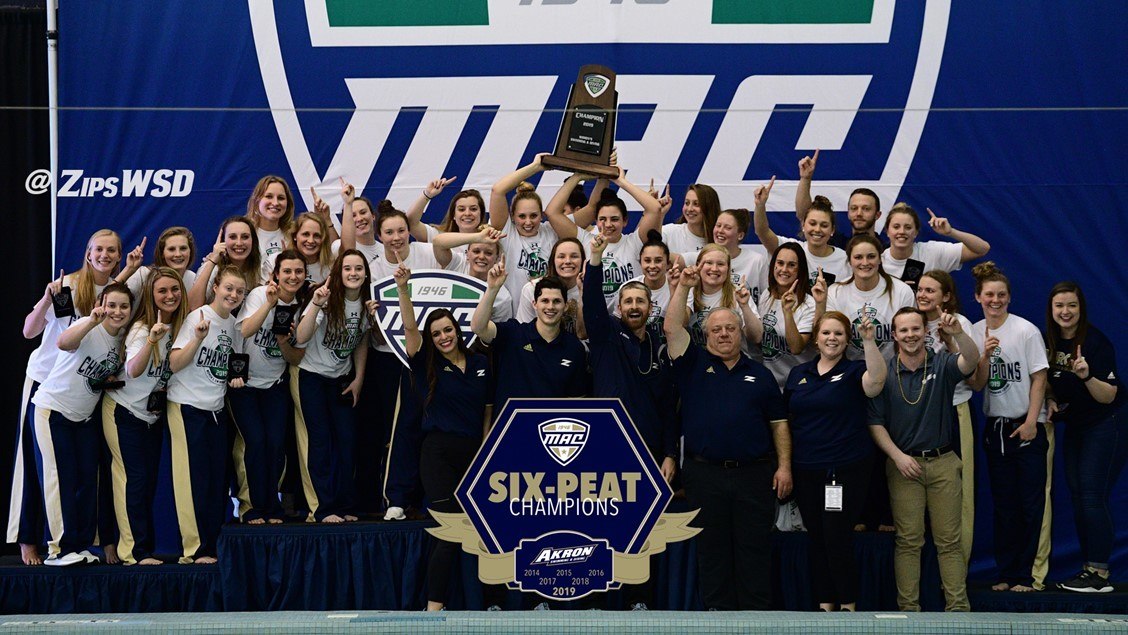 Akron won its sixth straight MAC title, and the almost-300-point margin was due to their depth. Eastern Michigan had two wins on the final day, and pulled away from Buffalo to hold onto second. Current photo via Akron Athletics

Akron won their sixth straight MAC title, and the almost-300-point margin was due to their depth.

Eastern Michigan had two wins on the final day, and pulled away from Buffalo to hold onto second. Buffalo similarly held off Miami for third, in a meet where there were close scores among the minor places, but not a lot of changes in the standings. day to day.

Eastern Michigan’s Delaney Duncan was selected as Most Outstanding Swimmer, and Akron’s Sarah Watson won Freshman Swimmer of the Year. Bowling Green’s Talisa Lemke was named Most Outstanding Diver, and please see below for a brief diving recap; my results from previous days didn’t include diving.

A side-note to the meet: organizers secured a permit to sell alcohol at the meet, which meet organizers say went smoothly.

Bowling Green’s Talisa Lemke was the easy call for diver of the meet, sweeping both the 1 meter and 3 meter boards. The Bowling Green junior won the 1 meter event with a score of 307.20, outpacing the field by more than 30 points. Kami Goodrick from Akron scored 284.90 to take second on 1 meter, while Buffalo’s Jae Sarkis was third with 278.75. In all, 7 divers got NCAA cuts on 1 meter.

Lemke won again on 3 meter, with another large victory: 27 points over Karly Crail of Akron. Lemke scored 341.35, while Crail scored 314.35. Eastern Michigan’s Sophia Tsafantakis was the only other diver over 300 with a 304.60. The MAC outdid itself on 3 meter, with a full 8 divers topping the NCAA qualifying score.

Congrats to Akron and the entire staff. Brian has done a killer job and they keep getting better. Would be a lot of work but would be interesting to score them into the Big Ten Champ meet. Just looking, my guess they would be 5th or 6th as a team. If I was a Power 5 team under top 4 at a championship meet, I dont think I would want to swim them. Congrats Zips!

Brian Peresie needs to be in serious conversation for any and all Head Coaching jobs that come open in all of the power 5 conferences. Some AD is going to figure that out, and look like a rockstar for hiring him.

15
0
Reply
No question
Reply to  Buckeyeboy