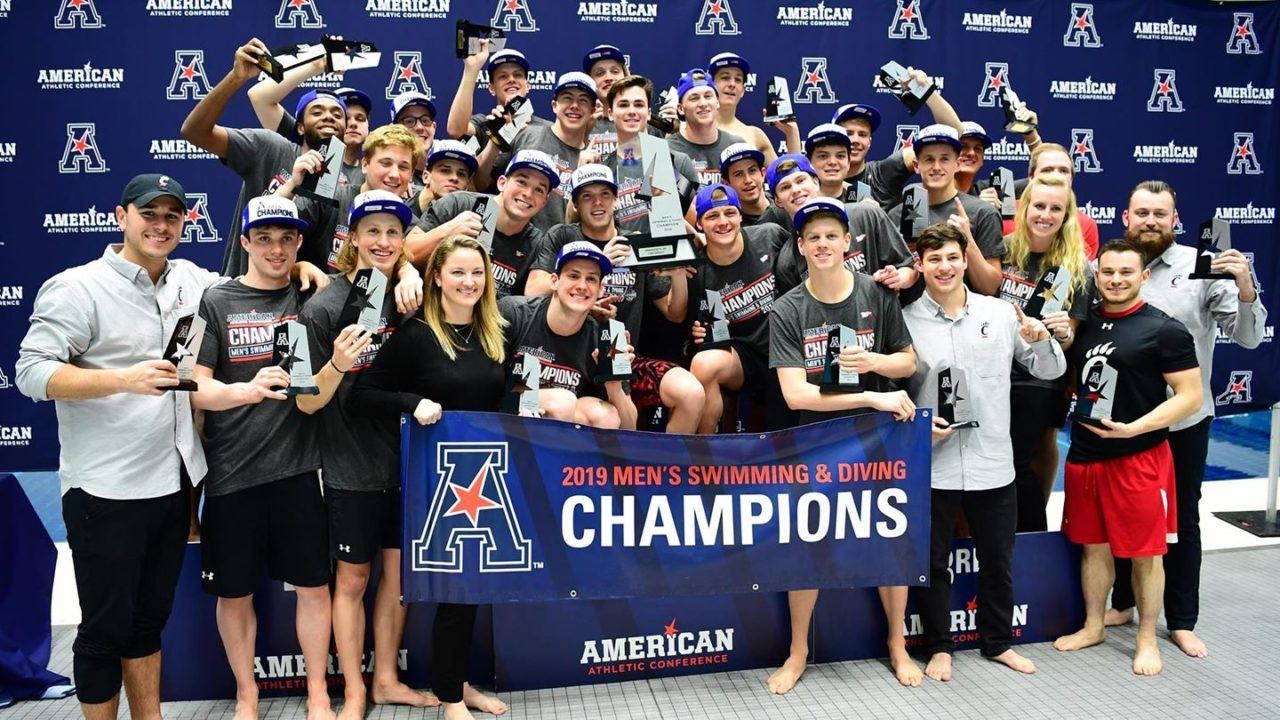 Houston dominated the meet for their third straight American Athletic Conference title, winning four events on the final day of action. The Cincinnati men repeated as champs, and did so by winning every event except the 200 breaststroke on Day 4. Current photo via Cincinnati Athletics

Recruiting Season for Class of 2024 Kicks Off Wednesday

Wednesday, June 15 marks the opening day of recruiting for the high school class of 2024 – all communications between students and coaches are now permitted.

Breaststroke and sprint free specialist Jenna Kerkman from Texas Ford Aquatics will swim for Houston in the class of 2026.

Florida Leads Class of 2023 Verbal Commitments with 17, Including 8 Top-20s

Bella Sims, the number one recruit from the girls high school class of 2023, has elected to swim collegiately in Gainesville.

Powell was part of the state-winning 200 medley relay in 2021. She will join a relatively young breaststroke team at Cincinnati.

Houston dominated the meet for their third straight title, and they dominated tonight, winning four events to stretch their final margin to over 300 points. Behind them Cincinnati overcame a 26.5 deficit to SMU to take a 3.5 point lead heading into the final relay. If SMU won the 400 freestyle relay or if they beat Cincinnati with a team in between, SMU would take second place; otherwise Cincinnati would. But Cincinnati didn’t let either of those things happen, taking second in the event to Houston, and therefore taking second in the meet.

Erin Trahan of SMU was named the Most Outstanding Swimmer, and Monica Marcello of UConn was named Most Outstanding Diver. Trahan won all three of her individual events at this meet, including the 200 fly tonight, while Marcello was 2nd on 1 meter and 1st on 3 meter. Katie Deininger of Houston won Freshman of the Year.

In the platform diving event, Katie Deininger of Houston was the top seed in prelims at 231.5, and she improved on that substantially at night to win easily with 268.25. It was good for her that she did because Johanna Holloway of SMU had her own 30-point jump to finish second with 234.95. Mary Warker (214.60) of ECU won a close fight for third against Cincinnati teammates Claire Schuermann (213.95) and Patricia Roscoe (211.95)

The top of the 200 breast leaderboard looked a lot like the 100 breast: Andrea Podmanikova of SMU defeated Peyton Kondis of Houston to win. But whereas the 100 breast came down to the wire, here Podmanikova took the lead early and never looked back, winning in a meet record time of 2:08.66, 0.63 seconds faster than she managed last year. Kondis was a couple ticks back in 2:10.62, and Kate McDonald of Tulane was third (2:12.09).

The 400 freestyle relay went as the meet did: a fight from Cincinnati, but then a clear Houston win. Zarena Brown (48.97) was the only sub-50 leadoff, and Houston continued to lead through Laura Laderoute (50.91) and Kathryn Power (50.28). But Cincinnati shrunk the lead on both those legs with Anhelina Kutsko (49.82) and Olivia Schmelzer (49.31), and leading into the anchor, they trailed by just 0.19 seconds. But Houston anchor Mykenzie Leehy was too much, and with the fastest split in the field (48.88), she pulled Houston away to a 3:18.29 win. Cincinnati was second in 3:19.79 ahead of SMU at 3:21.39 in third in the battle over second place in the overall standings.

Cincinnati repeated as champs, and did so with an emphatic final session, winning every event except the 200 breaststroke. After two days of the meet East Carolina looked liked they might challenge Cincinnati, but Cincinnati had another gear on the last two days. East Carolina settled for second, as Connecticut beat out SMU for third.

Din Selmanovic of Cincinnati won Most Outstanding Swimmer after winning the 500 free and 200 free, and coming 2nd in the 1650. Parker Hardigree of SMU, first on both boards and third off the platform, was Most Outstanding Diver. Hardigree and ECU’s Marek Osina were co-freshmen of the year.

Jacek Arentwicz of East Carolina then completed a sweep in the breaststroke events, adding the 200 breaststroke title (1:54.74) to the 100 title he won yesterday. It was the only men’s event of the night that Cincinnati didn’t win. Arentiwicz had each of the fastest splits in the field, and was never challenged. Behind him, Dominic Polling of Cincinnati was second (1:56.85), to complete the meet with a 200 IM title and seconds in both breaststroke events. Markus Hunter of UConn was third (1:58.50).

Last but certainly not least, the 400 freestyle relay may have been the race of the meet. Cincinnati’s Dominic Polling gave them the lead (43.97) over East Carolina’s Victor Martins Dos Santos (44.62). But East Carolina came back, and after Eric Hinderup (43.75) outsplit Alberto Garcia (44.19) and Gavin Erdmann (44.09) outsplit Justin Crew (44.66), ECU had taken a 0.36 second lead. But Cincinnati had 100 champ Alexander Fortman on anchor, and he pulled into a near tie with Cincinnati’s Blaz Demsar at the 50. But Demsar did not give up, and the two fought to the wall together, touched together, but when the bubbles had cleared Fortman and Cincinnati had gotten the win by a fingernail: 2:56.01 to 2:56.02. Demsar (43.56) had the second fastest split in the field, but it wasn’t quite enough as Fortmann had the fastest (43.19).