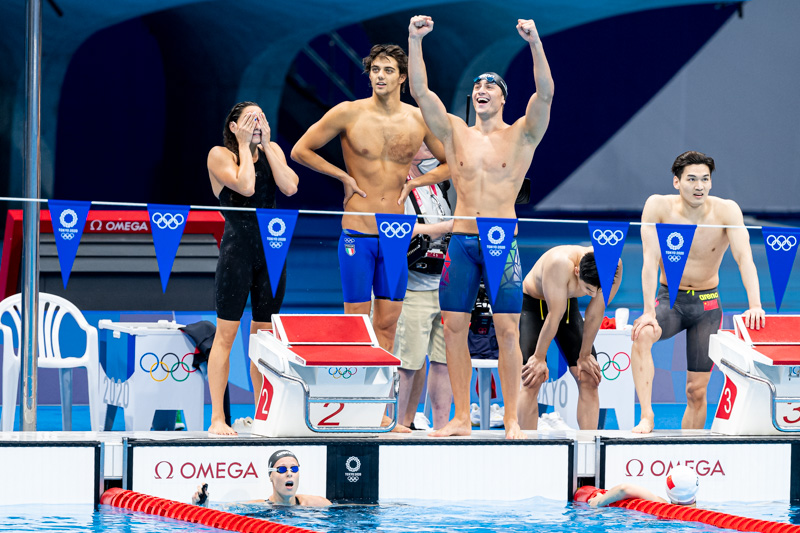 Great Britain broke the 4×100 mixed medley relay World Record by about .8 to win gold on day 7 of the 2020 Tokyo Olympic Games. This marked their 4th gold medal of the meet.

Their team of Kathleen Dawson, Adam Peaty, James Guy, and Anna Hopkin touched the wall 1st at 3:37.58 to break the record that was set by China in 2020.

The men’s 100 fly final witnessed multiple other historic swims by the Europeans.

For one, Hungary’s Kristof Milak became the second-fasted performer in history with a time of 49.68 to win silver. This simultaneously broke the European Record and Hungarian National Record.

In the same race, Switzerland’s Noe Ponti won bronze with a time of 50.74, lowering his Swiss National Record for the 3rd time this meet. He posted a  51.24 in prelims and a 50.76 in the semifinals, both of which outdid the National Record.

Ponti is Switzerland’s first 100 fly Olympic finalist in history and he won the country’s second swimming medal of the Tokyo Games.

Continental and National Records on Day 7

Bravo, Noè! Unbelievable swim only 24h hours after Jeremy’s bronze medal in the 200 IM. Delivering when it matters most – highest of skill!

I wrote a couple of days ago (after the men’s 4×200 free relay I think) that Switzerland were quietly having an excellent meet. Not so quiet anymore! Two bronzes in the last couple of days is excellent reward for a team that seems to be hitting PBs all over the place. Congrats Jeremy and Noe!

Russia are really not having a good meet. Only Rylov and Kolesnikov have really fired for them. Wouldn’t be surprised to see them out of the medals in the men’s medley relay tomorrow.

Russia blew their wad at Euros.

I think Italy will medal in the Men’s medley relay. They’re having a good week despite no golds. And they still have the 1500 with Paltrinieri