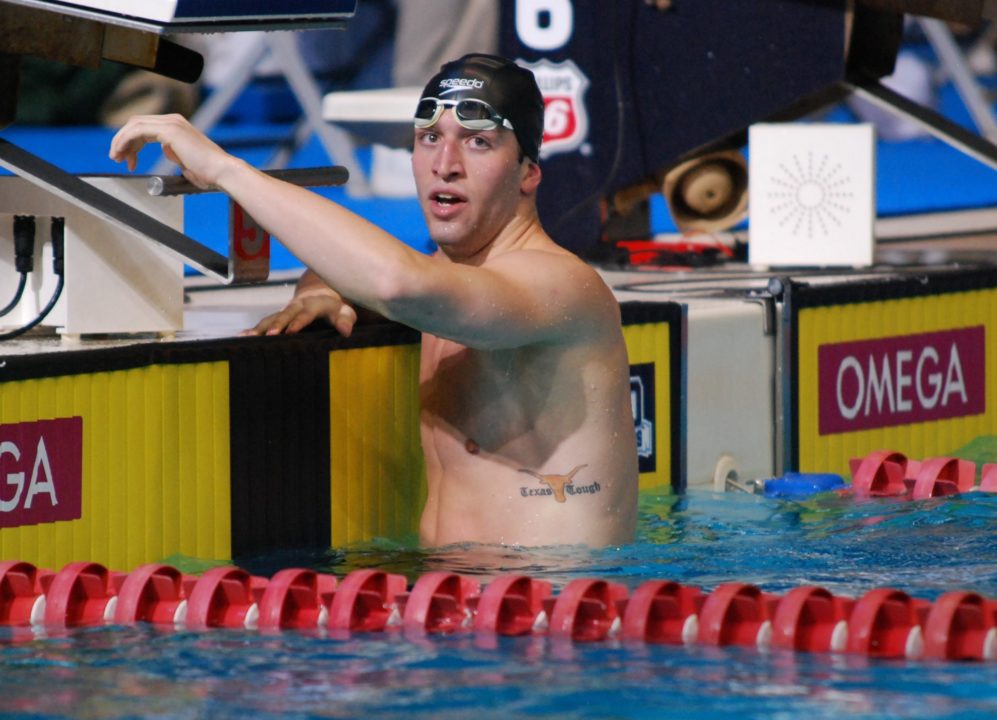 University of Texas alumnus Austin Surhoff was only entered in 2 events at the Richmond Pro Swim Series, and he made those races count. On Saturday, he shaved .36 from his personal best 50 free time from 2019, snagging 2nd place (22.54). Most of the time was dropped in prelims where he posted a 22.57, but Surhoff managed to outdo that swim in finals by .03.

He kept the momentum going on Sunday when he swam the 10th fastest 100 free by a 30-year-old American in history, 49.76, for a 3rd place finish. This was Surhoff’s first time under the 50-second barrier after he posted a personal best of 50.08 in prelims. There’s no telling what his secret to success was this weekend, but he did post to social media on Sunday that he stood in the 40-degree water of the James River between prelims and finals in lieu of a traditional ice bath.

While at Texas, Surhoff focused on the IM races where he won the title of 2010 NCAA 200 IM Champion and scored consistently in the 400 IM and backstroke events. At the 2012 Olympic Trials, he placed 4th in the 200 IM and 15th in the 400 IM. After placing 8th in the 200 IM at the 2016 Trials he took a 3 year-long break from sanctioned racing. When he started up again at the end of 2019, Surhoff snagged an Olympic Trial cut in the 50 free and turned his focus toward the sprint events. He is currently an assistant coach at Johns Hopkins University.

David Curtiss from Hamilton Y Aquatic Club hit a new lifetime best 50 free time on Saturday of 21.87, maintaining his rank as the 3rd all-time fastest 17-18 year-old in the event behind #2 Michael Andrew and #1 Caeleb Dressel.

This is the fastest 50 free swum by an American man during the 2020-2021 season, surpassing former American record holder Nathan Adrian’s season best of 21.98 from November’s Stanford Invite. Going into this weekend, Curtiss’ fastest 50 free time was 21.95 from the semifinals of the 2019 World Junior Championships. Curtiss went on to win silver in the event behind Ukraine’s Vladyslav Bukhov.

U.S. National Team member Curtiss also posted a lifetime best in the 100 free on Sunday with a time of 51.14 for 7th place in Richmond. His previous best before the meet was a 51.45 which he split on a relay in 2018. Curtiss is set to join the NC State Wolfpack in the fall of 2021.

100 breast world record holder Lilly King topped the breaststroke events in San Antonio but it was Emily Escobedo, a 2019 World University Games silver medalist in the 200 breast, who swept both events overall from the Richmond pool.

Escobedo did push King during the 2020 International Swimming League season as part of the New York Breakers, but King managed to build an undefeated streak of 30 consecutive swims over 2 ISL seasons until her Indiana training partner Annie Lazor bested her in Match 10 in the 200 breast.

High school senior Arsenio Bustos from Woodbridge Aquatic Club started off the Pro Swim Series with a 100 breast prelims win paired with a new lifetime best (1:03.54) after which he scratched the final to focus on the 100 fly. He went on to collect personal bests with a victory in the 200 IM (2:01.66) and 4th place finish in the 100 back (55.80).

In the 100 fly final, Bustos raced alongside fellow NC State commit Aiden Hayes from Sooner Swim Club and both swimmers went sub-54. Hayes dropped more than a second for a lifetime best of 52.81 and 3rd place finish overall behind Texas A&M’s Shaine Casas and NC State grad Coleman Stewart, a bronze medalist in this event at the 2019 World University Games. Bustos’ 53.25 placed him in 7th and was within a second of the lifetime best he posted 2 months ago at the U.S. Open.

Hayes came back the next day to win the 200 fly (1:58.33), destroying his previous best by about 3 full seconds and topping Texas’ Carson Foster by one-third of a second. This time now ranks Hayes as the 20th all-time fastest 17-18 year-old in the event.

World Record holder Regan Smith of Riptide was predicted to make some serious waves in the backstroke events this weekend after having only raced the 100 and 200 back each once since March. She took home two victories, but overall her times weren’t on par with her performances at the U.S. Open in November.

Smith did improve upon her 100 back U.S. Open time on Saturday though, winning the 100 back final by out-touching Olympic medalist Olivia Smoliga with a time of 59.75. Smith’s world record in the event stands at 57.57 from a 2019 World Championships relay split, and in March she posted her 2nd fastest time of the season, 58.18. Her event win on Saturday beat the 1st place 100 back time she posted at the U.S. Open by .20.

It’s important to note that the coronavirus pandemic added significant training difficulties for athletes. This makes March 2020 a unique point of comparison as it was the time that quarantine and safety measures were first put in place.

Why did Regan scratch??

Also a story line should be Claire Weinstein making the trails at the age of 13! I believe she made 2-3 cuts! Impressive

I really don’t understand why people dislike stuff like that. The girl is 13, what good is that trolling behind your computer. I bet none of you have Olympic trial cuts! Why can’t you just respect that Claire and her coach Carlee are doing awesome! Why do you need to be negative and take something away from them? Beyond me.

Shout out to usa swimming for giving the elite athletes a safe place to race!
Shout out to NC State for having 3 stud recruits perform at such high levels!
Not sure if one can tell exactly where someone is at in their training or how their training went in the pandemic. Good luck the rest of year to Trials and beyond!

Hadn’t Curtiss been under 22 before? I recall he went 21.95 or something at World Juniors prelims. Could be mistaken on that!

Semi-finals but yes it did happen there.

Was Emily the only swimmer besides Regan Smith to pick up 3 wins at their respective sight? Emily looks so good to make the team in the 200 breast!

Also Mallory? What happened to her, I feel like she’s been on a decline since 2017. Her and Kelsi need to switch up their training if they want a shot at making Tokyo. The youth will not let them in for the 100 fly or on a relay if they keep performing the way they are.

Regan looked very tried this weekend and I really wanted to see some fast times from her but I have to remind myself it is only January!

A lot of the events… Read more »

On the bright side Kathleen baker looked pretty good as with Olivia! Very small list of who actually looked good. I would have to name the MVP of this pro swim series to Emily Escobedo!