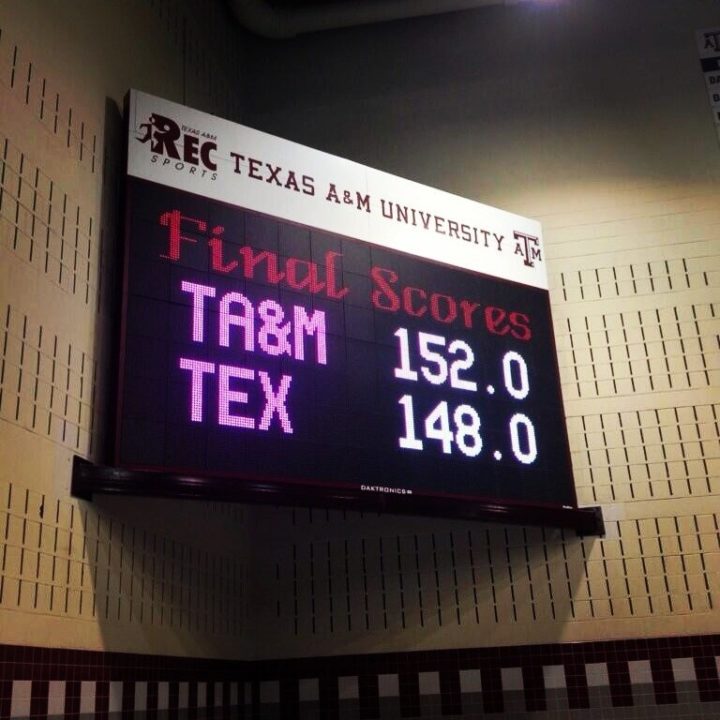 The Aggie's won a tight back-and-forth battle tonight over the Longhorns, in the first scheduled regular match since the SEC split (Photo Credit: Brad Marquardt)

Last season was the first season of the SEC split, leaving swim fans without the historically rich rivalry between the Texas Longhorns and the Texas A&M Aggies. Tonight, the two had the first scheduled regular match up between two schools (of any sport) that regularly competed against each other before the split.

This competition between Texas and Texas A&M is one, of not many, true rivalries in swimming. The teams, regardless of where they are in the season, will bring their A game to best their competitive foe. As swim fans, we’re excited it’s back and hope it continues in the future.

As we expected, the meet was a constant duel – the score switching back and forth between the two teams. It came down to the wire, but the Aggies were victorious at home over the Longhorns. The final score was Aggies, 152 to Longhorns, 148.

Notably Lily Moldenhauer split 25.31 on the leadoff leg for Texas. And Sammie Bosma, the anchor on the Aggies B relay split 22.52 on the freestyle leg – faster than the A relay.

Kaitlin Pawlowicz and Cammile Adams battled the whole 40 laps in the 100 freestyle. Both split at 4:57 at the half way mark, and Adams had a slight advantage heading into the final 100. But Pawlowicz had a stronger final 100 yards, and Adams final 50 was not enough to overcome her.

Sam Tucker was victorious today in the 200 freestyle, after finishing second the night before against UNC. She finished in 1:47.95, just under the NCAA B standard, over A&M’s Lili Ibanez Lopez, who finished in 1:48.56.

Moldenhauer would take the 100 backstroke at 53.48, well under the B standard. Her teammate Tasija Karosas was second at 54.28, also under the B cut. A&M’s best finished was Paige Miller in 54.96, for a third place finish and B cut.

NCAA Champion Larson broke the minute barrier in the 100 breaststroke. Her final time was 59.23, just .04 off the NCAA A standard of 59.19. That’s wicked fast at this time of the year.

Gretchen Jaques was second for the Longhorns at 1:02.30, NCAA B.

The Aggies other NCAA Champion from last season, Adams won her signature event, the 200 butterfly in 2:00.32. Bosma finished second for a 1-2 finish for A&M with a time of 2:02.07. Pawlowicz looked like she would beat Bosma would end up third for Texas at 2:02.26.

Bosma got her chance to shine in the 100 freestyle. She finished ahead of Tucker, 50.03 to 50.44. Bosma’s teammate, Ibanez Lopez who already had two second place finishes, would finish third at 50.62.

No doubt in anyone’s mind, Larson won the 200 breaststroke in 2:10.22, blowing the field out of the water. She was a little off the A cut here, but finished well under the B cut.

Her teammate Ashley McGregor was about five seconds behind at 2:15.78. She would out touch Cox from UT, 2:15.78. Both hitting the NCAA B standard.

In another duel in the distance events, Adams and Pawlowicz were back at it in the 500 freestyle. Each had one event to their name thus far, Pawlowicz in the 100 and Adams in the 200 butterfly. Once again, Adams had to upper hand into the final 100, and this time she was able to split enough to stay ahead.

Note: Sarah Gibson as listed as A&M’s 3rd butterflier, but A&M’s staff has confirmed that it was Neubert.

Texas would finish 1-2 in the 1m diving, and A&M was able to stop that sweep in the 3m. Texas would out score A&M 29-9 in the diving events.

Heading into the final relay, Texas had the advantage 144-139. A&M had to get first and third to seal the close victory. Bosma, Meredith Oliver, Kelli Benjamin and Ibanez Lopez would take the win in 3:20.57, averaging 50-lows.

Where is Dennighoff for UT?

I believe she has a tiny injury on her knee

Although A&M won, it wasn’t by much. And the UT women weren’t supposed to be that close. They had some amazing swims and great depth too. And missing both Denninghoff and Ellen Lobb, they would have easily won with them. Great outlook for the lady longhorns this year!

If we’re talking about missing people, A&M had Caroline McElhany and Sarah Henry sitting out. 2 big name swimmers for the Ags. Regardless of who was missing out, it was a great meet by both teams. Times weren’t really that impressive across the board, but you could tell the 2 teams were duking it out for place finishes.

with Caeleb Dressel in attendance is this the weekend the Horns wrap him up?

I believe that Cal or Auburn would be the best places for him.

He couldn’t have gone to Texas A&M to watch the meet. That is a recruiting violation.

I sure hope Caeleb didn’t attend the meet. If so, it would be quite awful for someone to inform the NCAA of a recruiting violation, as you’re not allowed to travel outside of a 20 mile radius of the campus you’re visiting.

However, recruiting violations aren’t terribly uncommon for the University of Texas. They’ve probably had Ian Crocker, Aaron Piersol, Brendan Hansen and every other famous alumnus meet him at school or give him a call to tell him he can do great things as a Longhorn. They did it a few years ago for a top recruit so why would they change now.

I can still learn something new about college swimming. 🙂
I don’t understand everything about the recruiting process.
Can you explain why a guy like Caeleb Dressel or someone else wouldn’t be free to watch a meet anywhere in USA, just as a simple spectator?
And more generally, what are the rules of recruiting visits? It seems very strict.
You talk about former swimmers who can meet him or call him. Anyway, the coaches or the former swimmers can still convince the swimmers to go in their teams during the rest of the year. They can still talk on the phone all year too! No? Is it forbidden too? So, if you answer it’s forbidden, I… Read more »

These are the NCAA rules but they have been adapted to fit LSU in particular.

my bad,,,,,but i thought Auburn was the only one who took short cuts

I was there. It was a fun dual meet. It would have been even better if A&M had Henry and McElhany and Texas had Denninghoff (and diver Maren Taylor). For an early season meet I’d say Breeja’s 100 was very fast (almost A cut). Moldenhauer was very solid. 50 free seemed fast,100 free slow, and 200 fast.

That 3rd place 100 fly finish for A&M was from Emily Neubert, not Sarah Gibson.

1anda2 – official results show Gibson swam it. I’ll get with the A&M SID and see if we can clarify it.

Both teams were down 2 swimmers. Texas had dual against North Carolina the night before, A&M has 3 Olympians and Texas 0 and A&M wins by 4. I wouldn’t call that “historic”. I’d said it a testament to Coach Carol and the UT girls.

You’re missing the point entirely. The historic part of the meet has nothing to do with who won or lost. It is all about football actually – when A&M left the Big 12 for the SEC the UT AD (Deloss and Plonsky) refused to compete against A&M. A&M and Texas have been competing in everything for almost forever. But not last year. Not one head to head competition between A&M and Texas in any sport. Deloss is a big baby.

But swimmers are different and get along most of the time even when they are rivals. So Carol and Steve made it happen. Good for them.

I don’t think you have to worry about Dressel being at this meet – it was women’s teams only.