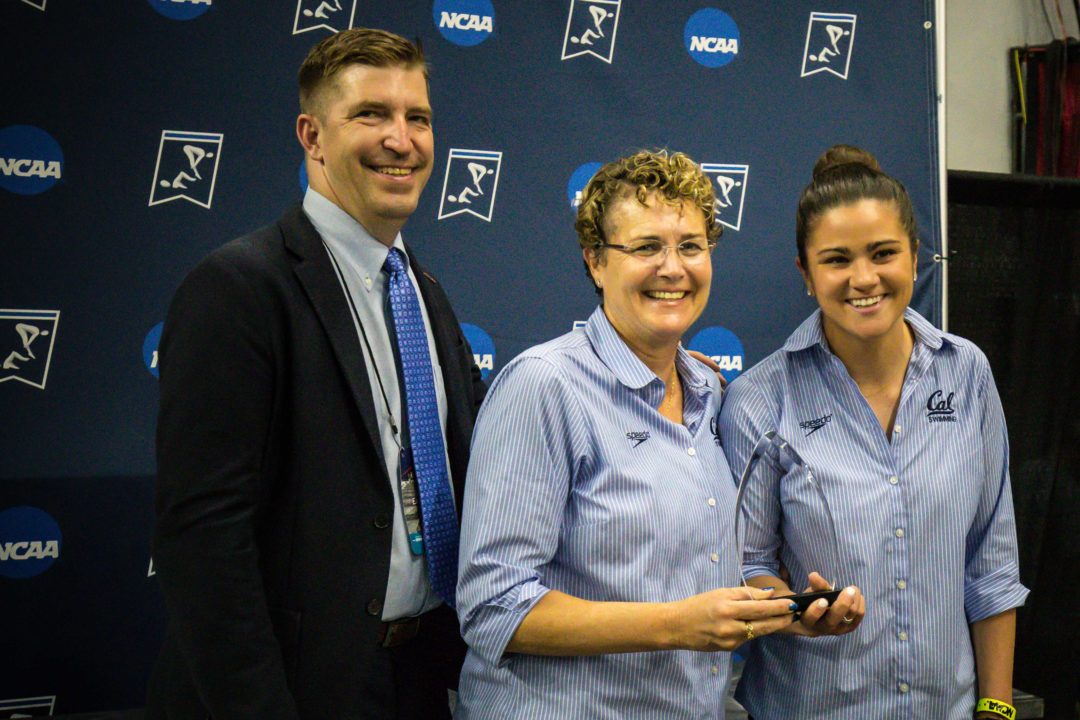 This is McKeever's 5th award, but first won when her team didn't take home the title. Archive photo via Jack Spitser/Spitser Photography

While the Cal Golden Bears came up short in their upset bid of arch-rivals Stanford, their efforts were enough to earn head coach Teri McKeever the CSCAA Women’s Division I Swimming Coach of the Year.

This is McKeever’s 5th award, having previously won in 2009, 2011, 2012, and 2015. On each of those prior occasions, Cal came away with the team title. This year, they were runners-up, finishing 37.5 points behind the two-time defending champions from Stanford.

The last time that this award was won by a coach of a non-team-champion was in 2014, when Stanford’s head coach Greg Meehan won the award in spite of his team finishing 2nd to Georgia.

The Cal Golden Bears won 4 events and put up a fight for the team title in spite of losing World Record holder Kathleen Baker from last year’s team, who turned pro with 1 year of eligibility remaining. This is Cal’s 3rd-straight runner-up finish.

Mckeever is one of two women to ever win this award. Dorsey Tierney-Walker shared the award with David Marsh in 2007 when the two were co-head coaches.

No awards were given those years. Not sure why.

Those were awarded to Dean Farris. Before he was even born.

Cal’s Coach, Karen Moe Thornton was the first woman to win the award in 1987.

^correct! But more impressive is the autograph she (^) gave me as a young Aquabear! I still have it!!!

My research shows the following edits to the list:

Yeah – this article needs to be corrected!!!

This is well deserved and great to see. Some coaches recruit talent. Others develop talent. It is tough to succeed on both fronts. Congrats to Teri on an outstanding season.

Wait a minute, according to half the readers out here, Teri is a terrible coach. What gives?

Half the readers owe Teri a big apology.

Yes, Teri undoubtedly deserves full credit for Missy’s 1:39. The fact that Missy was already a World Championship gold medalist in the LCM 200 free before she ever arrived at Cal is just a coincidence, as is the fact that Missy chose to be coached by someone else at her first opportunity.

To the point of “Bearly Breathing,” the hate comments often get a solid amount of upvotes.

except for Dean Farris, of course…

The hate on McKeever was just fake outrage. I admit being skeptical about what was going on when people were questioning her on here but then I sat in the stands and watched her coach two years in a row at the speedo grand challenge and it was obvious the comments were made by clueless internet keyboard warriors like myself lol