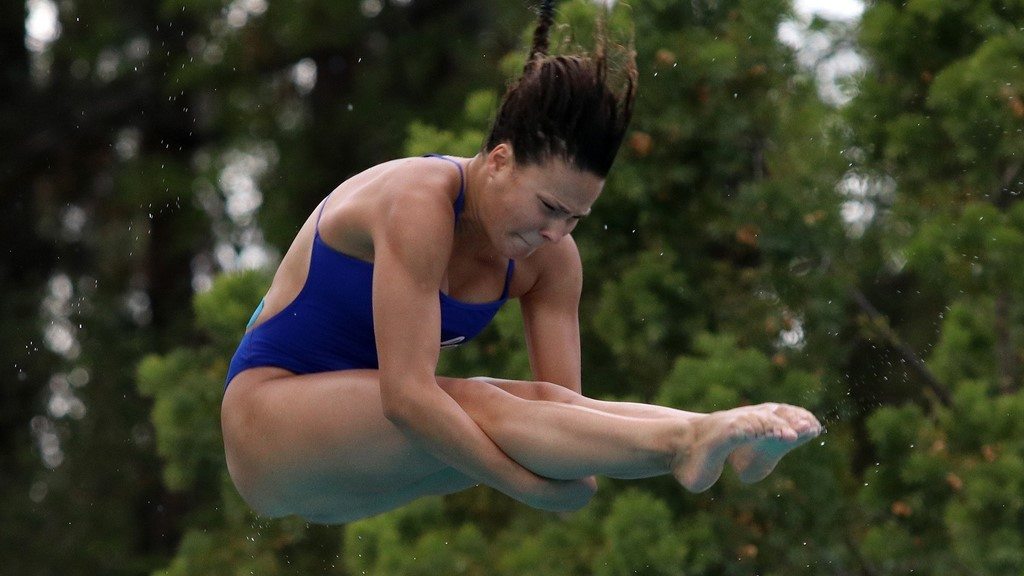 3-meter champion Maria Polyakova is the 2019 CSCAA Women's Division I Diver of the Year. Archive photo via UCLA Athletics

UCLA diver Maria Polyakova and UCLA diving coach Tom Stebbins were named the 2019 CSCAA Women’s Division I Diver and Diving Coach of the Year, respectively, on Saturday night in Austin.

The UCLA Bruins entered the meet with only 1 NCAA women’s event title in program history: Annette Salmeen, who won the 200 fly in 1996. Polyakova doubled that on Friday when she won the 3-meter event with a score of 396.00 points – which was a relatively-comfortable 15.50 point margin over runner-up Brooke Schultz of Arkansas.

UCLA’s divers scored all 75 of the team’s points at NCAAs, which was enough for them to finish 17th as a team at the meet. That’s a 9-place improvement from last year.

Polyakova was also the NCAA runner-up on the 1-meter, finishing behind Minnesota’s Sarah Bacon.

I almost feel bad for these girls who come in bright eyed & bushy tailed & then they stay relatively the same with their times if they are lucky.

Congrats to Tom & Maria! UCLA is lucky to have such a great diving program.

Tom’s success with diving only further shines light on the stupendous underperformance of UCLA swimming. How long will this waste of potential be allowed to continue?

Imagine if swimming were to be up to par with diving, could be a contender to be top 10

Not saying that the best diving is always linked with the best swim programs. However, I am saying that athletes can be (and generally are) successful at UCLA, with an extraordinary exception being the swim athletes.

My opinion is not based solely on this year’s results. My perspective is based on observations going back nearly a decade. Review SwimSwam’s annual recruiting classes going back to 2012 – you will see that UCLA’s swim recruiting classes have been ranked in the top 10 many of those years. Unfortunately, the results delivered by all that talent has consistently under-performed expectations. Only the contribution of their diving have led to team finishes anywhere near the national top 20 – this is specifically the… Read more »

I’ve re-read your reply several times. Still not sure whether you are disagreeing with me or simply justifying mediocrity. Let me be clear: I believe that UCLA – both the broad university community and the specific athletes participating – deserve much better. But if folks who appear to care about the team are more offended by the phrasing of my observations than the measurably feeble results in the pool, then perhaps my belief that UCLA deserves better is misguided – and we can leave it at that.

I think what The Grand Inquistor is trying to say is that with the talent that goes to UCLA, we would expect them to perform to expectations. It isn’t okay to justify scoring 0 points year after year from the swim team. Should they be greatful for their experiences? Yes. Most definitely. But the goal is not just to be on the swim team. It is to excel at the swim team. Imagine my surprise last year when I see they tied with USC last year at their duel meet, but then severely underperform at PAC12s. Something is wrong whether it be coaching, weights, team culture, attitude….etc.

As I alluded to in my “20 headlines” article, UCLA isn’t scoring 0 points year after year from the swim team. The last time before this year where the swimmers didn’t score, by my search, was 2009.

You guys are welcome to your opinions, just wanted to make sure everyone had their facts straight.

Thanks for the comment Braden. I didn’t mean to imply that swimming never scored points in the last decade, only that diving has carried a disproportionate share of the load. By my quick count, swimming has averaged about 11 points a year at nationals over the past 5 seasons, while diving has contributed about 43 each year over the same period.

I know you didn’t, one of the responses did.