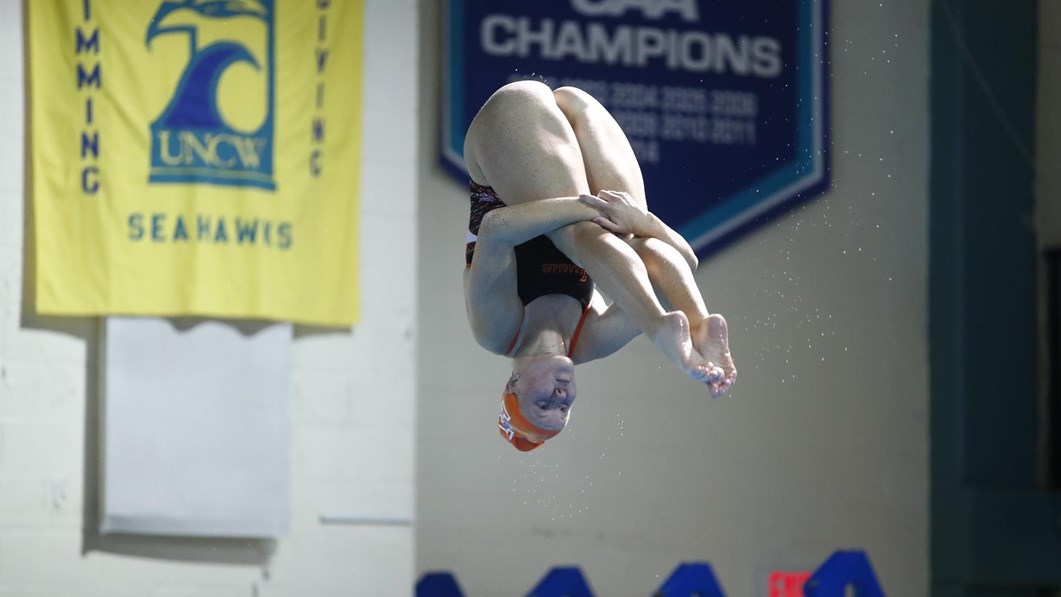 The Tennessee swimming and diving team swept UNC Wilmington at the Seahawk Natatorium in the men's and women's competition Friday to open the regular season. Current photo via Tennessee Athletics

WILMINGTON, N.C. – The Tennessee swimming and diving team swept UNC Wilmington at the Seahawk Natatorium in the men’s and women’s competition Friday to open the regular season.

Led by two-win days from sophomore diver Grace Cable, senior Tess Cieplucha, junior Tjasa Pintar and sophomore Mallory Beil, the women’s team swept each event en route to a 205-88 victory. The men won 13 of 16 events on their way to a 193-107 triumph – Alec Connolly and diver Will Hallam picked up two event wins on the men’s side.

“Tess is now on the all-time leader board for the pool in the 200 breaststroke, Mallory for the 100 fly,” associate head coach Ashley Jahn said. “They had great swims. They were both really excited and focused on what they needed to work on. They did a great job of adjusting and executing really well today.”

“This is always a great opportunity to see other swimmers in different events and try them out in swims that they might not be in later in the season,” Jahn said. “It gives us reference points in practice and maybe gives us an extra option at the end of the year. We always want to come in and make sure we’re competitive in winning the dual meet but it’s also about preparing for the end of the season, how are we going to be the most competitive.”

Cable made her Tennessee debut, winning the one and three meter springboard events with scores of 276.80 and 343.50. Her 3-meter score of 343.50 places her fifth all-time in program history.

“For Grace in her debut to be able to step up in an adverse environment, it was loud in there, she really stepped up in her first competition for the University of Tennessee and that was really pleasing to see,” diving coach Dave Parrington said. “The whole team stepped up and I am very pleased. It was good to see the 1-2-3 on the 3-meter board. Ana Celaya Hernandez did some nice stuff and to see the freshman Elle Renner take the third spot was good to see. She really made some positive changes and our depth really showed through tonight.”

“Alec Connolly is a tremendous competitor and that is no surprise,” associate head coach Lance Asti said. “Seeing his consistency, it’s really showing up and he is racing at a high level.”

Diving coach Dave Parrington praised Hallam for his ability to come back quickly after an injury kept him out of practice for the first few weeks of training.

“He has been busting his tail day in and day out of practice,” Parrington said. “Every chance he gets, we’ve seen some really good results.”

Freshmen Joel Giraudeau and Oskar Hoff stepped up for the Vols in their first collegiate meets, winning the men’s 200 fly and 100 fly.

“Joel and Oskar did a great job, stepping up and winning as freshmen,” Asti said. “It shows we’re getting deeper, we need to get deeper. We need our guys to keep turning over every stone to get better each and every time we hit the water.”

UP NEXT:
Tennessee will travel to South Carolina on Oct. 11 for a dual meet against the Gamecocks.

WILMINGTON, N.C. – Events wins from seniors Sean Cannon and Will Countie and junior Gianmichael D’Alessandro highlighted UNCW outing in a season-opening sweep at the hands of Tennessee on Friday at the Seahawk Natatorium. It was the season-opener for both programs, who met for a sixth time.

“Opening our season against a national powerhouse like Tennessee is always a challenge,” said UNCW Head Coach Jason Memont. “The coaching staff spoke with the team before the meet about staying focused on details in their racing. We welcomed a large freshmen class to collegiate swimming today and the whole team did a great job executing our plan. There was so much energy on our side of the pool. I was really proud of the way everyone raced.”

Junior Evan Arsenault posted a second-place finish for the UNCW women when she fashioned a time of 52.19 in the 100 Free.

Adding wins for the UNCW women were Meagan Robins in the 100 Fly and Hannah Albanese in the 200 IM.

Freshman Courtney Klausen made an impact in her first meet as a Seahawk, setting a school freshman record in the 1-meter board. Klausen scored 271.13 points, besting the previous mark of 268.35, set in 1992 by Kelli Sutton.

“There were a lot of good swims today, but the high point came in diving. Courtney (Klausen) exploded onto the scene by setting a UNCW freshman record and qualifying for the NCAA Zone Championships. The whole program is excited about her results and is looking forward to seeing her career unfold.”

In men’s diving, another freshman made the most of his debut as Kolbein Bjugan finished third on both 1 and 3-meter boards.

The Seahawks host Old Dominion in the second of two home meets to open the season on Oct. 12.