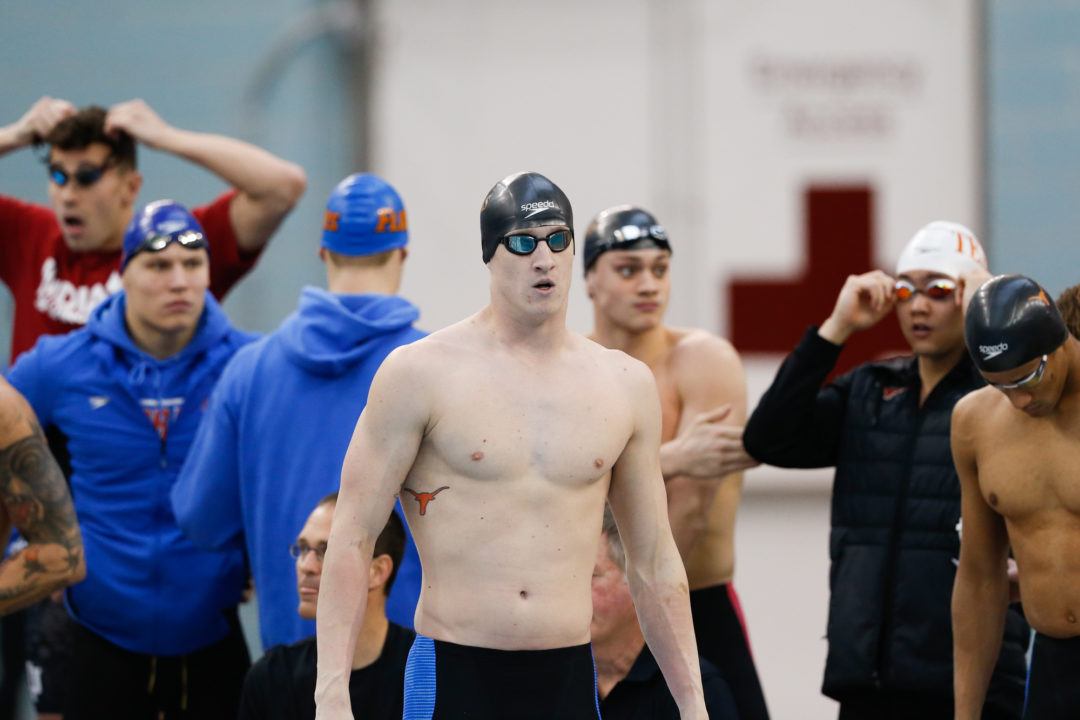 Tate Jackson unleashed a 48.20 in the 100 freestyle to lead the Texas Longhorn charge in Irvine. Current photo via Mike Lewis/Ola Vista Photography

Dave Walters. Garrett Weber-Gale. Jimmy Feigen. Ricky Berens. Neil Walker. Gary Hall Jr. The first 3 names on that list have all been sub-48 in the 100 free, before it was cool. The last 3 have all been sub-49. What do they all have in common? They all swam for Eddie Reese at the University of Texas.

Well, coming up on his 41st season in Austin, TX – the 76 year-old Reese’s production house of great freestylers doesn’t seem to be slowing down. On day one of U.S. Nationals in Irvine, CA, current or former Longhorn swimmers produced 4 of the top 16 times and 7 of the top 28 times in the men’s 100 freestyle – led by rising senior Tate Jackson, who won the B-Final in 48.20 (which we suspect is probably the fastest time ever swum in a B final).

Even though Jackson swam the 2nd fastest time of the night, because it was performed in the B-final it is not eligible for Pan Pacs qualification. With a 3rd place finish, Townley Haas secured a spot on the team heading to Tokyo for the August 9th-13th competition.

Texas is set up for a huge 400 free relay this year, with what should be incredible competition for relay spots between the outgoing seniors and incoming freshmen, and will be set up for years into the future.

It’s worth noting that incoming freshman Matthew Willenbring finished 34th with a 50.06. His lifetime best was set last summer with a 49.57. However, Willenbring tested positive for a banned substance (hydrochlorathiazide) at the 2017 World Junior Championships – where he went his best of 49.57. He served a 4-month ban that has already expired. As part of the suspension, he forfeited all results and medals beginning on August 28th, 2017, the last day of the World Junior Championships.

Conger should stop swimming the 200 fly. He is starting to look like the next Tom Shields

Or he should take the opposite approach and just train for the 200fly, which is a relatively weak event in the US

I am waiting for Dean Farris to start 200 fly. Because, why not?

What about men 100 free C final and D final? Omega Timing has not published them.