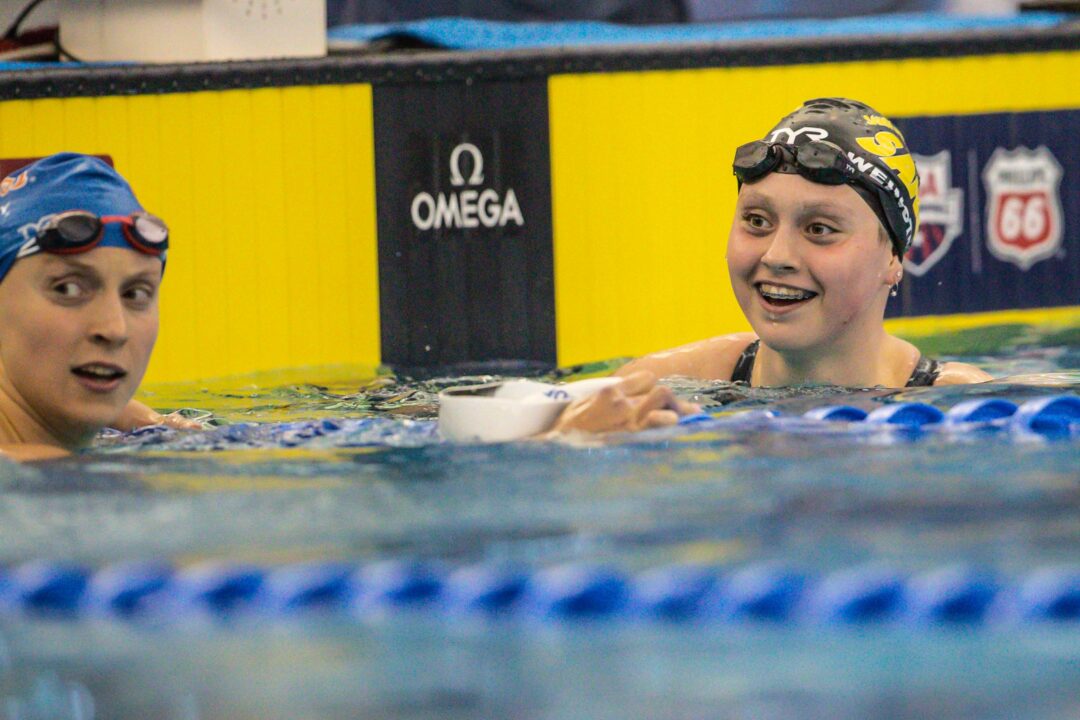 Weinstein became the fastest 15-year-old in U.S. history en route to locking down an individual spot at the World Championships in the women's 200 freestyle. Archive photo via Jack Spitser/Spitser Photography

Our most recent poll asked SwimSwam readers what the most head-turning swim of U.S. Trials was on the women’s side:

Question: If Hunter Armstrong‘s 50 back WR is the answer on the men’s side, what was the biggest surprise swim of US Trials for the women?

As it turned out, there weren’t too many low seeds that went on to qualify for the World Championship at the U.S. Trials last month, but that doesn’t mean we didn’t see some eye-opening swims in Greensboro.

Without a doubt, the biggest surprise of the meet came in the men’s 50 backstroke, where the top three finishers launched themselves into the top-four all-time in the event, and none of those spots went to the now former American Record holder Ryan Murphy.

Hunter Armstrong broke the world record in a time of 23.71, downing Russian Kliment Kolesnikov‘s previous mark of 23.80, and Justin Ress (23.92) and Shaine Casas (24.00) became the third and fourth-fastest swimmers ever.

So with the caveat that Armstrong had the surprise swim of the meet, this poll asked readers what the biggest shock was on the women’s side (only factoring in Worlds-qualifying performances).

Coming out on top at just under 42 percent was the 200 freestyle swim from Claire Weinstein, who became the fastest 15-year-old girl in U.S. history with a time of 1:57.08.

Weinstein, who swims for the Sandpipers of Nevada, dropped nearly a second and a half off her best time in the event over the course of the day, having lowered her previous mark of 1:58.53 down to 1:57.71 in the prelims.

While that swim in the morning heats certainly made her performance in the final less of a “shock,” it was still a bit of a surprise to see Weinstein overcome established veterans like Leah Smith (1:57.44) and Hali Flickinger (1:57.53) and book the second individual spot in the event at the World Championships behind Katie Ledecky (1:55.15).

(Ledecky ended up dropping the event from her Worlds schedule, earning Smith an individual entry alongside Weinstein.)

Receiving over 20 percent of votes were both Leah Hayes‘ 200 IM (23.3 percent) and Katie Grimes‘ 400 IM (22.4 percent), who both qualified for Worlds despite being far from favored to do so entering Trials.

Hayes took full advantage of a pared-down field that included the absence of Olympic bronze medalist Kate Douglass and broke the girls’ 15-16 National Age Group Record in the 200 IM final in a time of 2:09.99, qualifying for Worlds with a runner-up finish behind the Olympic silver medalist, Alex Walsh.

Grimes dropped five seconds to win the 400 IM in 4:36.17, a performance that came after falling just shy of qualifying for Worlds in the 800 free and 800 free relay. That swim also saw Grimes defeat Olympic silver and bronze medalists Emma Weyant and Flickinger.

Rounding out the poll was Douglass, who still received over 12 percent of votes for her swim in the 200 breast.

Douglass swam the fastest-ever time in short course yards to win the NCAA title in March in 2:02.19, but looked to be a long shot to finish in the top two at Trials given her fastest swim coming in was 2:24.0, well off what we saw Lilly King (2:19.9) and Annie Lazor (2:20.8) produce last summer to stand on the Olympic podium.

But Douglass dropped over two seconds (though her previous PB was unofficial) to place second to King in 2:21.43, out-touching Lazor (2:21.91).

Below, vote in our new A3 Performance Poll, which asks: Who is the biggest benefactor of all of the withdrawals we’ve seen from the 2022 World Championships:

How much of surprise is it that the second fastest American 200FR swimmers is not even 1:56? After that it doesn’t really matter who this women is: a 15 years old or a veteran. It is slow. So slow that this personal best has ranking #84.
This golden period from London to Rio of American supremacy is gone unfortunately.
Weinstein’s result is not even near to
Allison Schmitt’s – 1:53.6 (Olympic gold medal 2012)
Missy Franklin’s – 1:54.8 (WC gold medal 2013)
Katie Ledecky’s – 1:53.7 (Olympic gold medal 2016)
That is just a bad luck that peaks of these three incredible swimmers being so close to each other in time never overlapped. Otherwise… Read more »

I always wondered as well if we had Schmitt, Ledecky, and Franklin, along with one of our many other 1:55-1:56 swimmers and they were all at their peak what an insane world record we’d have. But that’s the fun of the sport which keeps in exciting.

I don’t think Grimes was a surprise. Summer McIntosh had been a recent example of what young stars can do to the 400 individual medley, given the ridiculously low standards in that event. Grimes was surprised in the other direction. She was not happy with the 4:36. In fact, some of the other swimmers kidded her on Instagram regarding her facial expressions after winning the race.

Ledecky’s 800 was the biggest surprise on the women’s side. I didn’t see many sub 8:10 forecasts here.

I don’t think the time Weinstein swam was that much of a surprise given she was already 1:58 last year but her getting the second individual spot was.

I think it was, in my opinion. She didn’t go 1:58 last year. This year alone she dropped significant time to go the 1:58.5 then dropped to 1:57.0 at nationals with a few more flat start opportunities at Worlds.

Overlooked that. Still, 2sec drop in 8 months with more opportunities to go. Excited for her possibilities in a wide array of events.
Side note, I’m ready for our Trials in Adelaide to start in a few days!

You’re Australian? I was ready for our trials to start weeks ago!

Agreed. Weinstein’s improvement is awesome but I think most of us had Ledecky and Madden in our pick’ems and didn’t really think twice about it.

The US women will need to swim lights out to even medal in the 4×200 relay at worlds this year. I expect things will be significantly different (improved) for them by Paris 2024.

Zhang benefits a lot in the 100 fly, no mcKeon and MacNeil

She can hang with them though, she still won silver in Tokyo. No one is close to Peaty in 1 breast, which is why that opens up doors for Kamminga.