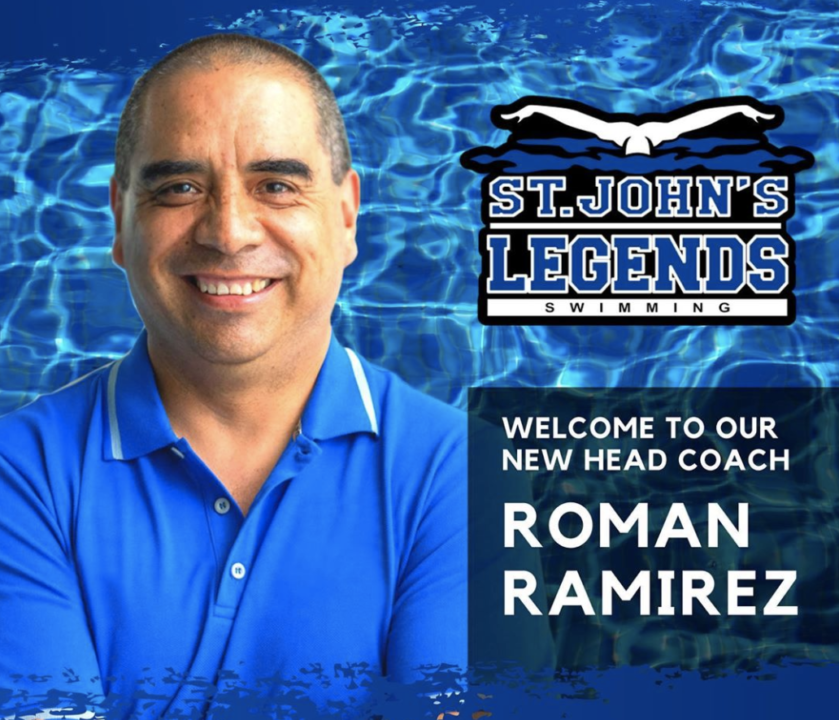 The St. John's Legends Swim Club has announced that Roman Ramirez will be taking over as head coach of the club for 2020/2021 season. Current photo via Instagram/@nwilliams_art_and_design

The St. John’s Legends Swim Club, a Canadian team based in St. John’s, Newfoundland has announced that Roman Ramirez will be taking over as head coach of the club for 2020/2021 season.

Following his own swimming career, Ramirez began coaching in Mexico and continued for several years before moving to Canada in 1997. Having coaching in Manitoba, and BC, Ramirez most recently served as High-Performance Age Group coach at the Mississauga Aquatic Club. Prior to that, he was the head coach at the South Western Aquatics in Tillsonburg, Ontario for eight years.

The Legends also announced that current coach Chris Mercer will be promoted to Director of Swimming Operations and Assistant Head Coach. Like Ling, Mercer has served as a coach for the club for the past 4 seasons.

Ling’s switch to the Stingrays, and now Ramirez’s move to the Legends are two of the many recent changes on the Canadian coaching scene. As previously reported, Sean Baker made the move from the Oakville Aquatic Club to become head coach Markham Aquatic Club, while Darren Ward was announced as the new head coach of the Hamilton Aquatic Club. Additionally, Etobicoke Swim Club has yet to announce who will replace their former head coach Kevin Thorburn who died this past April.

The St. John’s Legends, who have been in operation since 1978, are currently the largest club in the province and were recently nominated as SportNL team of the year. Among the club’s recent achievements are winning the 2019 Provincial Swimming Championships and picking up the men’s team title at the 2019 Swim Nova Scotia Provincials Championships in Halifax, Nova Scotia.

The Legends have produced two swimmers who have represented Canada on the international stage; Noah Cumby and Owen Daly. Cumby, who swam with the Legends until the 2017/2018 season, traveled to Fiji for the 2018 Junior Pan Pacific Championships where he picked up a bronze in the 4×100 medley. Daly on the other hand raced at the 2018 Senior Pan Pacs having trained with the Legends for several years until moving to Montreal where he now swims for the Club Aquatic Montreal (CAMO).