Six Storylines To Watch At The 2022 U.S. World Championship Trials 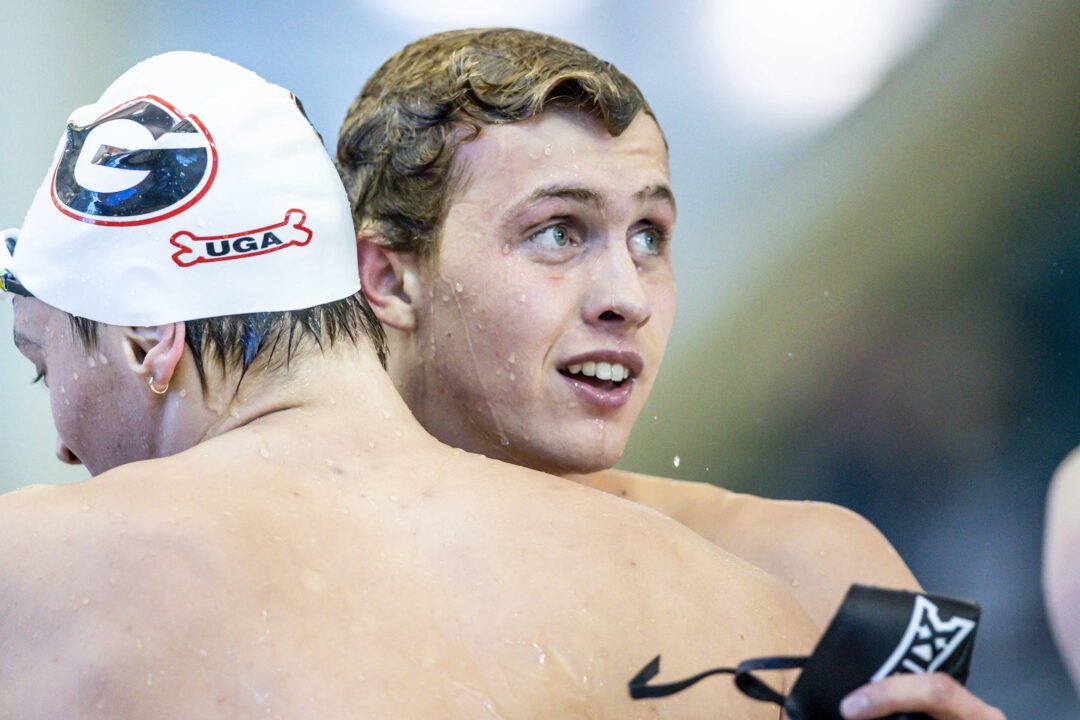 All eyes will be on Carson Foster as he vies to qualify for the World Championship team after a near-miss at the Olympic Trials last summer. Archive photo via Jack Spitser/Spitser Photography

The first post-Olympic U.S. selection meet always brings a wave of intrigue, and 2022 is no different.

Following the retirement of some established veterans, and the others hitting a hard reset button after Tokyo before resuming full training, this year presents a new opportunity for some of the young guns to carry the momentum created last year into the new Olympic cycle. It also introduces a chance at redemption for some swimmers who fell just shy of expectations in 2021 as they look to reassert themselves in the conversation for Paris 2024.

Here are six key storylines to watch for at the 2022 U.S. World Championship Trials.

Casas Looking For A Bounce-Back

The 22-year-old made big moves after the summer, opting to forgo his senior year at Texas A&M, turn pro and join Eddie Reese and the elite training group at the University of Texas.

Early indications are that the training is working, as Casas holds three times ranked inside the world’s top-five this season (200 IM, 100 back, 100 fly) without having competed with a taper.

Moving into World Trials, where he’ll be a contender in up to five events, Casas is due to book his ticket to his first major international competition and start making some noise on the world stage.

Male swimmers will be just over four weeks out of competing at the NCAA Championships when the first heat of the World Championship Trials kicks off on Tuesday, while the women will have had an additional week to prepare.

It’s a uniquely-early selection meet for the U.S. this year. Canadian swimmers in the NCAA, for instance, have always had just a week or two between the conclusion of NCAAs and their World or Olympic Trials meet, but the Americans haven’t had to deal with this type of turnaround in recent memory.

The earlier World Championships (initially scheduled for May in Fukuoka, now June in Budapest) bumped up trials to late April, nearly two months earlier than Wave II of the Olympic Trials were last year.

It begs the question: how will the NCAA swimmers respond?

Short course yards and long course meters are two entirely different animals, and it’s tough to gauge how the quick turnaround will affect those in contention for a World Championship berth.

Will swimmers who missed their taper at NCAAs be able to rebound? Will those who were lights out in March manage to carry that momentum forward into April? It will certainly be interesting to watch as the meet progresses.

As outlined in our men’s 200 free preview, several established names from the event and the U.S. 800 free relay won’t be in Greensboro. Townley Haas and Andrew Seliskar, the individual U.S. representatives at the 2019 World Championships in the 200 free, both recently announced retirement, while Blake Pieroni is out with injury.

That’s three of the seven men who swam a leg on the 800 free relay in Tokyo (Seliskar and Pieroni in prelims, Haas in the final) absent this year.

On top of that, relative to past success, this relay has struggled of late on the international stage. Fourth in Tokyo marked the first time a male U.S. relay missed the podium in Olympic history, and they also haven’t won this race at the World Championships since 2013. This all comes after winning eight straight Olympic/World titles from 2004 to 2013, plus the 2016 Olympics when Michael Phelps was back in the fold.

Seeking new life in the event, Kieran Smith is a good start, having become just the third American, after Phelps and Ryan Lochte, to go sub-1:45 in the 200 free last summer (leading off the relay, no less).

Drew Kibler swam on both the prelim and final relays at the Olympics, and has continued his progression this season, including winning the NCAA title last month.

Behind those two is where the question marks come. Zach Apple faded coming home on the Olympic relay and with his focus surrounding the 100, his consistency in the 200 free is still up in the air. Patrick Callan, the #4 seed behind Smith, Kibler and Apple, had an ‘off’ NCAA season.

So who steps up beyond Smith and Kibler is what we’ll be watching. Carson Foster was blistering on the relay at SC Worlds and is capable of being a mainstay on the role moving forward. Caeleb Dressel could probably pull out some magic if he swam this relay at Worlds, but will he put himself in contention by swimming the final in Greensboro?

Luca Urlando is coming off a red-hot NCAA Championships and is another player, as are fellow collegiate swimmers Grant House and Trenton Julian, among others.

The women’s 400 free relay could be the most wide-open it’s been in some time this summer as some of Australia’s best continue to opt out of the 2022 World Championships.

The U.S. women have been dominated by Australia in the event in recent Olympics, but did triumph at the 2017 World Championships, when the Aussies were notably missing Cate Campbell. This year, Australia won’t have Campbell or 100 free Olympic champion Emma McKeon, potentially opening the door for the U.S. (and Canada) to take a run at gold.

A recent poll showed Claire Curzan, Kate Douglass and Gretchen Walsh are the frontrunners to win the 100 free at U.S. Trials, none of whom swam the relay in Tokyo. Abbey Weitzeil has been a mainstay on the relay for years, and is the only swimmer in the field who has been sub-53 inside the qualifying period. Two-time world champion Simone Manuel will not be competing.

If names like Curzan, Douglass and Walsh can step up and potentially challenge the 53-second barrier, the relay will be revamped and have a shot at gold this summer. There are several other names to watch for, including Torri Huske, Olivia Smoliga, Erika Brown and Natalie Hinds.

Can Carson Foster Silence The Doubters?

Carson Foster has been one of the best American male swimmers in the past 12 months, but he’s come up a little bit shy when the pressure is at its highest.

At the U.S. Olympic Trials, Foster was up by nearly three seconds on third-place Jay Litherland with 100 meters to go in the 400 IM, but Litherland erased the deficit and Foster missed earning a berth on the Olympic team. He later narrowly missed qualifying in the 200 IM (fourth) and 200 free (eighth).

One month later, he swam a time of 4:08.46 in the 400 IM, one that would’ve won both the Trials and the Olympic Games rather comfortably.

The 20-year-old once again failed to secure an individual NCAA title as a sophomore, although he had a dynamite showing at the Short Course World Championships in December.

Can he finally get over the hump? Foster is the top seed in the 400 IM, third in both the 200 IM and 400 free, and sixth in the 200 free. If he swims up to his ability, he makes the team. If he can deliver with all eyes on him is the question.

Can Any Veterans Reclaim Their Spot?

Numerous established names who had been on major U.S. teams for years failed to qualify for the Olympic team last summer, and some of them have since stepped away from the sport.

Others are still here, looking to get back on the team and create some momentum for the next two years.

We did a poll in late 2021 asking readers which U.S. female swimmer who qualified for the 2019 World Championships but missed the Tokyo Olympics had the best chance of making the 2022 Worlds team. The following month we did the same for men.

Kelsi Dahlia led the women’s voting with 48.8 percent, followed by Leah Smith and Melanie Margalis. Ryan Held was the clear winner of the men’s poll, and those are certainly the main names in the mix.

Held has the best chance from a numbers standpoint, with relay opportunities in the 100 free, and the same could be said for Smith and Margalis in the women’s 200 free.

Individually, all face tall tasks, with extremely talented youngsters flooding the psych sheets. We’ll see if anyone can get their groove back.

Will Brad Tandy out touch Dressel?

It’s going to be hard to do that as:

1) A retired swimmer, and
2) A South African

Been hearing Robin Leamy has been putting in 500-800 yards a day at the YMCA. Just sayin, man, he might be able to bring it.

The fact that Kieran is only the third U.S. male to ever go 1:44 made me do a double take. None of Haas, Dwyer, or Vanderkaay ever hit the mark despite seeming like they definitely had the potential to do so.

This event truly was being carried by Phelps and Lochte for so long.

Part of the frustration with Haas as a fan that it never came together individually in LC compared to this relay swims.

I’m still of the belief that Haas wins the 200 in 2016 if the relay happens before the individual event.

walters and berens were both 1:44.95 in 2009 – walters at nationals and berens leading off the heats relay. kieran smith isn’t the third american to go 1:44, he’s just the third fastest

Third without the supersuits tbf

Random but who is Carson hugging in the cover picture

Foster, Urlando and Casas please Lord that’s all I want this time

as much as I have concerns for Carson, I am more confident that Carson wants this more than anything and will get on the team this year in some way.

Is short course worlds not considered a major international competition? Cuz Casas seemed to do just fine there

come on Carson it’s your time, we’re all rooting for you

Well, at least 3 people are not (downvotes)

And if it’s not his time, then at least the fact that this WC was originally supposed to be in Japan, then almost didn’t happen at all, and that many of the world’s top swimmers chose to be at Commonwealths instead can be some consolation