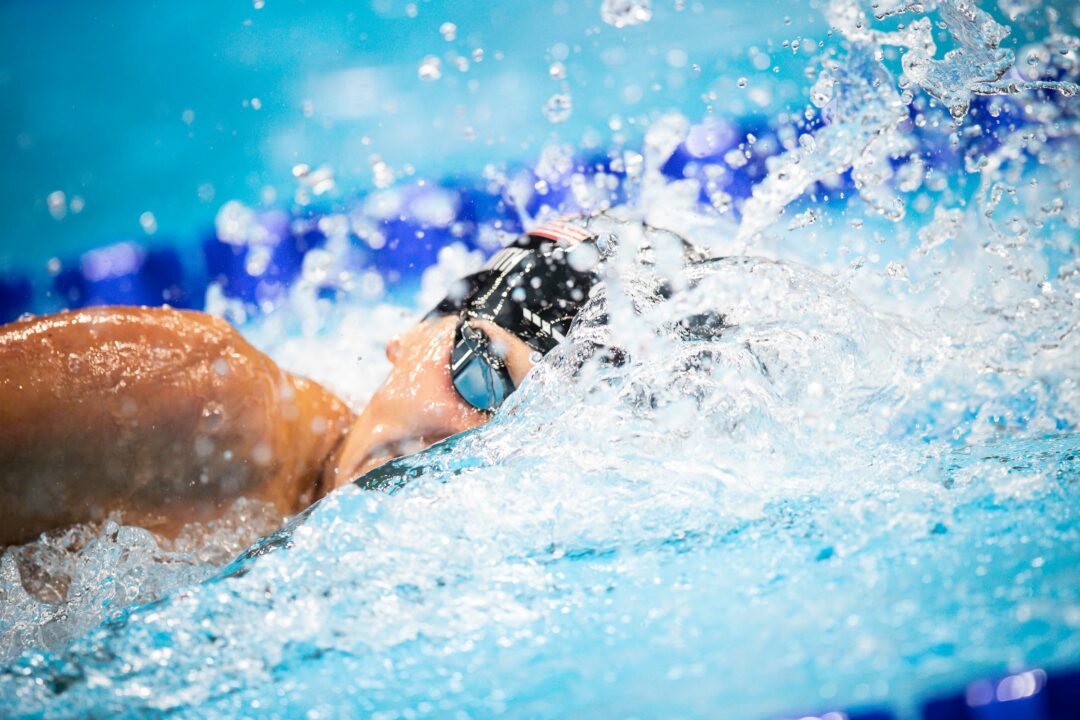 Kieran Smith appears set to lead the US men in this event through the rest of the quad, potentially surrounded by a mix of Olympians and NCAA stars. Archive photo via Jack Spitser/Spitser Photography

For a bevy of reasons, it’s been a weird few years in the swimming world. That fact particularly rings true for the US men in this event — thanks to an injury and two mid-quad retirements, three of the men who formed the USA’s 200 free core during the previous quad will not be competing this week.

Blake Pieroni recently had knee surgery, and Townley Haas and Andrew Seliskar each retired recently. Those three accounted for 8 of 12 finals spots in 4×200 relay at the US’s key international long course meet from 2017-2019. All three also participated in the 4×200 in Tokyo, with Haas swimming finals and other two swimming prelims.

So, on one hand, there are some big shoes to fill. On the other, three of the four men who swam on the 4×200 final in Rio return, and they hold the top three spots on the psych sheet. Not only that, but all four men who were on the gold medal relay at last December’s short course worlds should be in the hunt as well.

Kieran Smith is the obvious favorite here. He went 1:44.74 leading off the relay, making the 3rd-fastest American ever in the event. He didn’t match his best times at NCAAs this year, but with Florida’s known long-course focus, that could easily be due to keeping his eye on the ball for this summer.

Right after Smith on the psych sheet is Drew Kibler, who like Smith just wrapped up his senior year at Texas, winning his first individual NCAA title with a win in the 200 free. Kibler finished 3rd in this event at last summer’s Olympic Trials. He’s the only other man on the psych sheet who’s been under 1:46, and given his strong NCAA performance, he seems to have the inside track on the 2nd individual spot after Smith.

While Zach Apple may be better known as a 100 freestyler, he’s also been a staple on US 4×200 relays over the last few years, including a gold medal in that event at the 2018 Pan Pacific Championships. His lifetime best of comes from Trials with a 1:46.22, before he finished 5th in finals with a 1:46.45.

Michigan’s Patrick Callan sits 4th on the psych sheet with his best time of 1:46.49. He didn’t have a stellar NCAA season, but Michigan has mid/distance long course history, and like some of the other contenders, he may have kept an eye on long course this season.

US swim fans have wondered for a while what Caeleb Dressel is capable of in this event, with speculation that he has at least 1:45 relay swim in him. He’s seeded 5th with a 1:46.63 from last summer’s Olympic Trials, which he swam in prelims before scratching the semi-finals. However, there’s no guarantee that Dressel will swim this event. It’s the same session as the 50  fly, and while the 200 free is an hour before the 50 fly, he may opt to leave this out of a fairly crowded schedule. If he does swim it, he should be in the final.

A pair of 20 year-olds hold the next two spots on the psych sheet: Carson Foster (1:46.67) and Luca Urlando (1:46.93). Memorably, Urlando finished ahead of Foster in this event in the OT semi-finals, but then chose to scratch, allowing Foster in to the final. Foster improved his time, but still missed making the relay team by less than two-tenths of a second, finishing 8th. He had a great NCAA season, swam on the victorious 4×200 at short course worlds, and reportedly went 1:46-low in a Texas time trial a couple weeks ago.

Urlando also had an incredible NCAA championship despite suffering an injury not too far out from the big dance. He split 1:30.58 on Georgia 2nd place relay at NCAAs, one of the fastest splits in the field, but he hasn’t registered any long course swims this season. Like Dressel, he is entered in the 50 fly, although it seems like his path to a spot on the team may be clearer in this event.

Three other men have lifetime bests of 1:47, but not during the qualification period, so those times don’t appear on the psych sheet.

Grant House just wrapped up a strong fifth year campaign with Arizona State. He had actually had the fastest 200 yard time in the country this season with a 1:30.23 from Pac-12s, even though he didn’t match it at NCAAs. and he’ll be looking for his first lifetime best since 2018, when he went 1:46.95.

Looking for a Drop

With up to six swimmers qualifying for the team thanks to this event, there’s a near endless list of men who could have one great day and drop a 1:46 that it’s likely to take to make the team for relay purposes. So, without mentioning each of the 40+ guys entered in this event, here’s just a few of the more likely candidates from further on down the list.

There’s a pretty strong track record of NCAA 500 free championships making international teams in at least the 4×200 free, so keep an eye on 2021 NCAA champ Jake Magahey, who is seeded 8th with a 1:47.30.

Cal fifth year Trenton Julian has one of the fastest times in the country so far this season, 1:48.50, and he had the fastest split on this relay at short course worlds. His Golden Bear teammate Gabriel Jett had a fantastic freshman campaign and is worth watching as well

House’s ASU teammate Julian Hill has been 1:47.58, and it’s also worth noting that 2016 Olympian Ryan Held is training with the Sun Devils. He was 1:47.57 at last summer’s Olympic Trials, and he was also on this relay at Short Course Worlds

You can never count out the Texas crew, which includes guys like Tim Connery (1:47.96), Coby Carrozza (1:49.10), and Luke Hobson (1:49.10) this year. Carrozza is particularly intriguing, as he unofficially went 1:47.3 in the Texas time trial meet in which Foster set an unofficial best recently.

Michael Cotter of the TAC Titans has been the fastest high schooler in the country so far this season, posting a 1:48.63 that puts him 16th on the psych sheet.

Dark horse: Jay Litherland – While he’s primarily known for his 400 IM, you may recall that Litherland actually swam in the 4×200 prelims in 2017 after Dressel didn’t swim, and his lifetime best of 1:47.58 from 2018 would tie him for the #12 seed on the psych sheet. It’s not uncommon for some veteran to randomly pop a big swim in this event and make the team, and Litherland could easily fit that bill.

TX getting all the Love! If we are looking at NCAA’s for time improvement and possible dark horse, Luke Miller did beat Smith, Julian, Freeman, Carrozza, Connery, Hubson, Hill, and Jett at NCAA’s.

A lot less proven in LC but Miller would make a good dark horse pick.

Not really related but everywhere I have looked, it seems the video of the men’s 200 free final from Tokyo has disappeared off the internet. Anyone know where I could find it?

Welp time to switch to a European VPN

If you’re not in Europe, then you won’t be able to see all of the Eurosport videos. You can find the replays of prelims and finals in the Olympic website, just look “Day X Prelims Replay Swimming Tokyo 2020” on Google. It’s kinda messy but there it is for everyone.

Many of the race videos from Tokyo are unlisted on the NBC Sports channel for some reason but you can find most of them in the “Tokyo 2020 Summer Olympics: Swimming” playlist

More specifically videos where US athletes did not win were unlisted

Tbh I always find this to be very annoying. I don’t see a reason for NBC to be this biased other than profit and their image where an American doesn’t win gold. But the same can be said as well with 2 Michael phelps races from Beijing 08’ that were on YouTube until a few years ago the 100 fly and the 400 free relay that NBC took down.

On the olympics website, you can watch full replays of all swimming sessions at Tokyo without commentary. Just scroll down and put swimming as the sport.

How do u not have Patrick Callan In top 8 at this meet with the 4th fastest best time. He’s an Olympian. It’s not a lock to make the team by any means but it shows zero respect for him

NCs was just 4 weeks ago and we don’t have goldfish memories.

Do you have a source on that?

During the men’s trials preview video, one of you said that Blake was retired. I assumed it was just a slip of the tongue considering BP himself said he will be sitting out this year because of the knee injury–unless y’all know something we don’t…

funny enough I think it was Braden that said so

Just like other. He is trying to get as much money from USA swimming

Yes, it was a mistake on my part.

The only reason he would swim prelims at world trials would be to show his strength for the relay.
And I’m not even sure he really needs to impress the coaches.
Why in the hell would he swim the individual race at worlds or olympics even if he made the top 2 at trials? No medal chance and huge waste of energy affecting his already loaded individual schedule.

Side note when Townley Haas swam 1.45.03 at 2017 trials at age 21 with barely any dolphin kicks I thought he would be the next big thing and that his prime would be 1.44.4 and a silver at the olympics behind Scott. I miss Townley man.