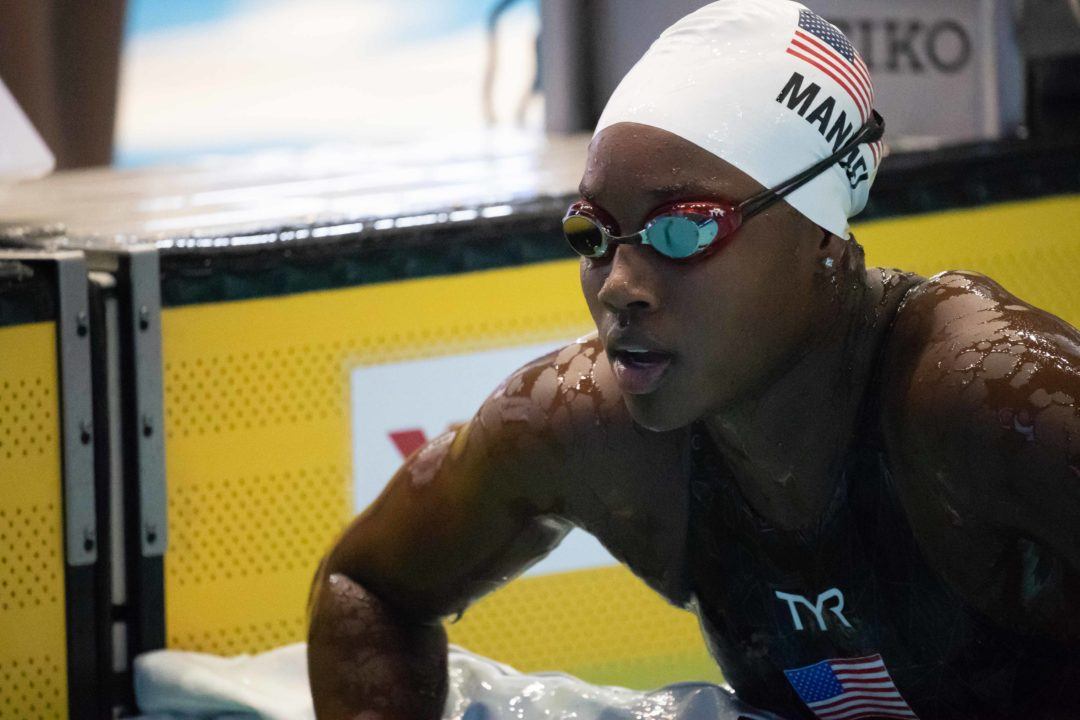 With two gold medals Sunday, Simone Manuel separated herself from the group of eight women who had previously won six medals in a single meet. Archive photo via Mike Lewis/Ola Vista Photography

After becoming the first American woman in history to sweep the 50 and 100 free at a World Championships Sunday, and then anchoring world record on the women’s 4×100 medley relay, Simone Manuel completed the most decorated performance by a woman in long course Worlds history.

With Sunday’s relay finish, Manuel ties Missy Franklin in medal count (16) and now trails only Katie Ledecky in medal caliber, but American Natalie Coughlin and Sweden’s Sarah Sjostrom are also ahead of her in overall count with 20 and 17, respectively.

Note that the two mixed relays were not introduced to the Worlds event lineup until 2015, so Manuel had two extra medal opportunities compared to record-holders in the past. American Caeleb Dressel set the overall single-meet medals record at 8 on Sunday, as well.

Manuel is not among the top-10 women in history in individual medal count alone. Sjostrom leads the way with 16, Hosszu and Yuliya Efimova each have 15, and Ledecky is third with 13. Manuel has four individual medals in all.

The mixed relays and the point system instead of a vote for swimmer of the meet were both introduced the same year–2015. Not only does the point system totally ignore relays, it is very generous in giving points to swimmers who lose races, even giving a point to a swimmer who failed to medal and finished fourth. Very likely the two were linked. You need to seriously wonder about a point system for swimmer of the meet in which a swimmer who failed to get either a record or a medal could theoretically win the award with 6 fourth place finishes. But you can think of it as a tradeoff: A questionable addition of two relays which favor powerhouse nations,… Read more »

Congrats to Simone on a fantastic meet. What a champion!
She’s always underrated. Too funny!
But she keeps winning, winning and winning the big races.
Simone is the Queen to perform at 200% when it counts, IN FINAL! She’s one the clutchest athletes of all time!

If we look at the Olympics instead of the Worlds, Ledecky would not have her two relay medals that she got in 2016 if she had been Swedish–but in 2012 had she been from any other country she would have been able to compete in the 400 free as well as the 800, and she very likely would have gotten the bronze.

It helps when you can get 5 relay medals.

She had a great meet, but the 7 medals is very missleading

I also would prefer to get rid of the mixed relays. So for the sake of discussion let’s do that. In fact, let’s not consider the relays at all. How many women have won the 100 free at back to back worlds? How many have won Olympics then worlds then worlds again? How many have won both the 50 and 100 at one worlds? These are all very short lists. She did those things AND the relays. She is incredible and this relay opportunity quibbling is both predictable and silly.

Simone will never get the respect of Sarah … I wonder why?

Is it because one is blonde hair and blue eyed and the other is not? Just throwing it out there. That’s the only possible explanation I can think of.

Sarah owning 6 world records (in 2 different strokes, on top of that) is probably a big reason as to why she has all that respect. Simone doesn’t have any world records. She’s great nonetheless, but to say the only difference between them is the color of their skin is clearly far from the truth and not at all the reason why Sarah is “more” respected. Sarah and Katinka are the only two athletes that currently holds 6 world records each.

And she consistently beats Sarah. WRs are great but you need to show up in the big meets when everything is on the line

My comment had nothing to do with any meets in particular, he stated that Sarah has a respect that Simone yet doesn’t. I then stated that 6 WR might help you earn that respect, the respect she fully deserves. obviously Simone deserves respect as well as she is a great sprinter, but Sarah is more versatile ( and, Simone beat Sarah in events that are her best events while they’re Sarah’s 3rd and 4th best). Being versatile AND having 6 WR is Sarah’s advantage. You guys acts as if Sarah did so bad this meet when she literally medaled in 5 individual events.

Oh so you’re saying that Smith’s world record in the 100 back shouldn’t count as it was a leadoff in a relay? Interesting! You must really hate Sarah to think that her insanely good WR shouldn’t count 😂 Your “would belong to cate if Sarah hadn’t..” mentality is just plain embarrassing. So Peaty’s WR in the 100 br shouldn’t count? I mean, he swam it when he was still fresh. Same with Smith’s 200 back then, she was still fresh since it was her second swim of the meet. Jeez. Some of you people on here are really something else.

Or, if Cate had swum faster. But she didn’t

All this remains to be seen, but I think a lot has to do with Simone Manuel being an American. Ledecky will never get the respect given to Titmus, and Ledecky is just as white as Titmus.

All the medals were earned. Not like she won them in a raffle….

Simone’s individual accomplishments at this meet were incredible. I think it’s just important to note she won 5 medals by swimming the 100 free…

It’s nothing against Simone. She did here job by swimming the races and doing incredibly well. I’m pointing out how the mixed relays are just stupid IMO (and many many others)

There is an incredibly popular sentiment that swimmimg has to many events among fans of other Olympic sports, and the mixed relays really do not help, especially with the IOC looking to limit the number of athletes at the Olympics. It’s not singling out Simone I fell the same way about Dressel’s 8 medals as well.

Agree. I’d give Simone full props for her meet as one of the best female performances strictly based off her 50/100 wins. Add her solid 200 split on the 4*2 if we wish to step into traditional relays.