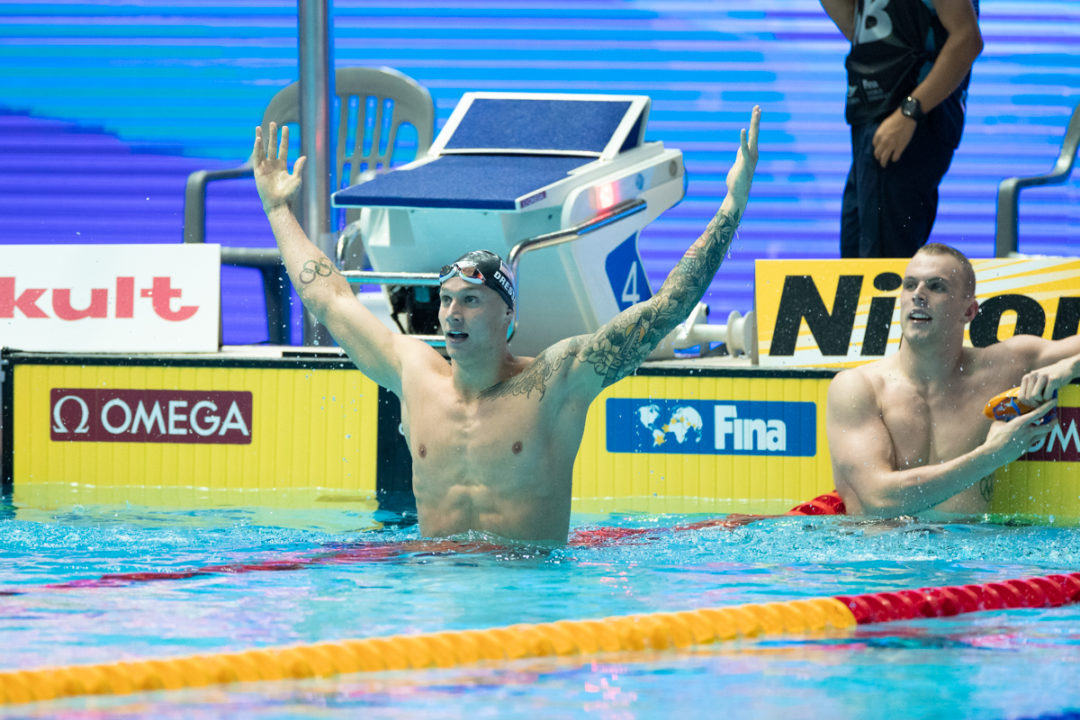 With the United States’ second-place finish in the men’s 4×100 medley Sunday night in Gwangju, Caeleb Dressel secured his eighth medal of this 2019 FINA World Championships championships, setting a single-meet record.

Dressel himself was an owner of the previous medals record, having earned seven in 2017, as did Michael Phelps in 2007 and 2011, Australian Michael Klim in 1998, and American Matt Biondi in 1986. Notably, mixed relays were not a part of the Worlds program until 2015, meaning Dressel had two additional medal opportunities on his predecessors.

The 22-year-old now ranks third in Worlds history behind Phelps and Lochte in caliber of medals (13 gold and two silver), but additionally trails Nathan Adrian, Hackett, and Sun Yang in medal quantity.

13 golds in 15 races is a pretty slick ratio

Love me some Caleb, but with the new mixed relays this comparison is just inaccurate.

To become the GOAT u gotta win 5 or more INDIVIDUAL golds at an Olympic games. preferably in world record fashion.

Well done Caeleb! And I enjoyed your interviews too. Can’t wait for 2020.

This is all great but remember prior to 1973 there were no world championships and until recently there was no ability for American swimmers to compete once they left their universities because no pros were allowed to compete. Nobody knows how many medals Mark Spitz might have won, he won 9 golds and 2 bronze medals in two Olympics, he was lucky his senior year in high school was in 1968, his senior year at Indiana was 1972. After that he was done because he could not make money as a swimmer and continue to compete so he retired. In that era only Chet Jastremski who was in med school, and Gary Hall same thing, really were able to continue… Read more »

Would not have happened without the mixed relays, which shouldn’t be a thing. His four individual golds are what is most impressive here.

Why shouldn’t they be a thing? They’re fun to watch (especially the mixed medley), the athletes clearly enjoy them as the men and women rarely get to compete with each other, and relays are always a great way to end a session. More of them means more sessions ending with a relay.

Mixed medleys are not fun to watch

Caeleb Dressel will win NINE golds in Tokyo will officially become THE GOAT.

You heard it here first

He’d need to add three events in order to do that, considering that two of the medals he won here aren’t contended at the Olympics.

With caelebs progression I can see him winning more events in the years to come. He’s doing a great job and kicked absolute butt at these World Champs. Let’s see if he swims the 2IM and 2free at nats and what he goes.

You’re right on all of this. The thing is, folks being excited and exaggerating what is possible (if Swim Swam had been around some people would have probably been predicting 10 gold’s for Phelps), is just that, excitement. Of course there are outlandish claims, but those don’t force you into the bitter know-it-all you became. I realize a lot of what you said toward the end was trolling, but it’s pretty clear it didn’t begin that way. So take a page out of your own comment book and “stop it.” Plenty of us disagree with statements about nine gold.medals without turning mean like you often do…

49.2 fly splits ARE bailing out your countrymen, and faster than Phelps ever swam….

So Caeleb not only swam faster…. in a textile suit… but also inproved more on his relay performance….

No, we’ve heard it about a million times over the last year or more.

And he backed it up this week. Four individual swims, four golds, four American records, one world record.

And it kills you….

What 9 events will he win?

First of all, I don’t agree with the 9 golds, however these are the events I think he is likely to win gold in (NOT guaranteed, as seen with the medley relay)

Add Scott to that threat list in the 100 free…

I heard he may take up water polo and platform diving in the next year to keep it interesting.

For Caeleb to win 9 gold medals in Tokyo it would mean that Dean would have to drop out of 5 of the events he qualifies in. We all know that Lord Farris is gracious and works in mysterious ways but in the end I think Dean’s quest for 18 gold metals in a single Olympics will take precedence over Dressel’s chance to pass Phelps.