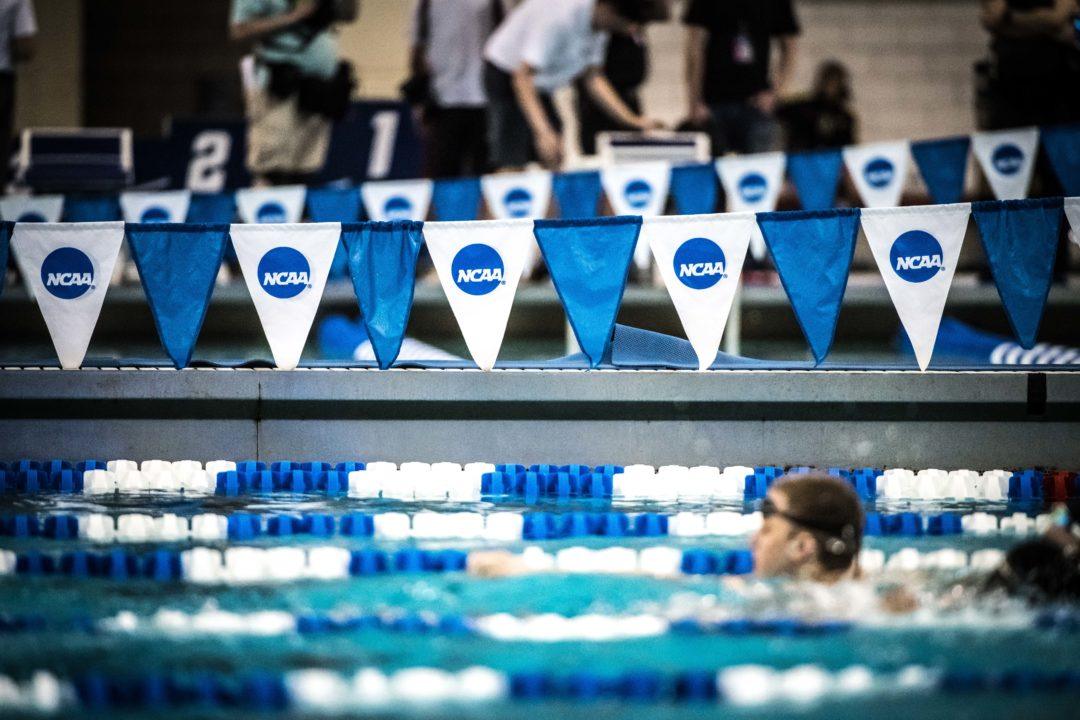 "If we want to save our seasons for our teams and athletes, now is the time to take bold action," says Franklin & Marshall head coach Ben Delia. Stock photo via Mike Lewis/Ola Vista Photography

This “Shouts from the Stands” submission comes from Ben Delia, the head swimming coach for Franklin & Marshall College.

Uncertainty rules the roost in 2020. COVID-19 forced the cancellation of the 2020 NCAA Championships for Divisions I and III, and it forced the mid-meet cancellation in Division II. Looking ahead to the 2021 championships, there is still a great deal that we don’t know about what schools, conferences, and the NCAA may allow. While many colleges and universities are poised to attempt a return to in-person, on-campus learning this fall, the fate of athletics is hanging in the balance, especially for non-revenue generating sports like swimming.

Swimming is characterized as a winter sport within the NCAA, with a season approximately corresponding to the short course season. This puts most conference championships and NCAA Championships in the mid-February to late-March time frame. A traditional NCAA season features dual meets in the fall, invitationals around Thanksgiving, training trips in December and January, followed by a resumption of dual meets and then championships in January through March.

Why consider moving swimming to spring sport status for 2021?

The normal travel schedule that takes place during the fall semester of an NCAA swimming season presents an untenable situation in the current Covid-19 era, with too much student-athlete movement from September through the winter flu season. Leaving out the possibility of a second wave, with the resurgence of the first wave, current travel plans are being curtailed for the fall. More schools and conferences are likely to limit or suspend non-essential travel.

Additionally, many colleges and universities are implementing condensed academic semesters with longer than normal break periods in between the fall and spring terms. Few college teams would consider holding their athletes on campus through the entirety of the holiday seasons, so any normal winter season would require coaches and athletes to seek permission from administrators to come and go from campus (possibly several times) during the holiday period when most universities will be seeking to clear out their residents. Doing so would be costly at a time when schools face budget crunches, and would also actively work against the Covid-19 spread mitigation efforts being implemented by administrations. On top of this, the NCAA has already implemented a step by step process for resocialization in sport in this era, which would need to be observed following any resumption from a break.

The rapid escalation of cases around the country creates the reality that campuses that do open in the fall will almost certainly see Covid-19 cases in their student populations. In addition to the obvious safety benefits from forgoing competition during a period of heightened risk, planning now for a spring season avoids the near certainty of cancelling scheduled fall competitions, and can provide for a well thought out and planned spring 2021 competitive phase.

For this hypothetical exercise, I use a template that contemplates teams returning to campus for the official season phase on January 18th, conference championship meets the week of April 22nd-25th, and NCAA Championships May 19th-22nd. Individual conference schedules typically vary depending on exact championship dates, and from a regional scheduling perspective, it is likely that conference meets would be held across several weekends in mid-April depending on pool availability. At the end of the NCAA Championships qualifying period on April 25th, we then allow for 3.5 weeks to the beginning of NCAA’s, which is the standard length of time from the end of the qualifying period to the beginning of the championships.

For the overall season structure, all three divisions would be allowed to practice only during the fall semester. The entire semester could be the pre-season period for Division I and II, while Division III would be limited to 5-weeks of allowable practicing based on the season outline above.

I realize that a spring season may not be ideal for all student-athletes, with coaches and athletes preparing for Olympic Trials in June 2021 having to make tough decisions on whether to compete at a May NCAA Championships. The truth is that those with true Olympic aspirations will be making these decisions whether NCAA’s are held in March or May, and at the end of the day coaches and athletes in this position will choose what is best for their athletes on a case by case basis.

Taking an overall viewpoint, the risks outweigh the benefits when considering intercollegiate competition for fall 2020. We have already seen this in the fall cancellation announcements of several prominent conferences and schools across multiple NCAA divisions. Will January be better than September for the start of the season? The truth is we don’t know, but it is becoming increasingly clear that a September start is not a responsible option. If we want to save our seasons for our teams and athletes, now is the time to take bold action, delay the season start, and plan for a spring 2021 NCAA swimming season.

If season is moved to the spring, how does that affect practices in the fall? Are teams forced to go to 8 hours of practice until January? Would be disastrous. I know most top notch programs find ways around this rule but it would definitely have an impact across the mid majors and any honest P5 teams. Interested to see how this plays out.

As a current collegiate swimmer, I honestly hope the NCAA considers this as an option considering the fact that even if a fall season does happen, many dual meets will be cancelled, practices may be restricted, and conference/national meets may be cancelled on short notice or happen without allowing family and friends to watch. Swimming in the spring would hopefully allow enough time for us to slow the spread of the virus and ensure a (more) normal season.

My only concern is if ncaas will require a swimmer to taper 3 times in a “short” ampunt of time. (ncaas, olympic trials, olympics if qualified) Or will the taper fall right with olympic trials?

Imagine a swimmer from Arizona State or Indiana trying to swim conferences, ncaas, trials, and maybe even olympics…THEN having to figure out a transfer.

Spring 100% is the only way this is going to work, unfortunately.

I would be interested to see if there is an increase in swimmers in the transfer portal especially as conferences seem to be either be fully cancelling sports for 2020 while some are playing the waiting game.

This is incredibly well thought out and articulated. Thank you Ben for leading with ideas!

Not related to the NCAA season, but if some nations aren’t “ready” (still having a lot of virus spread/travel restrictions) for the Olympics next year will they just not participate, and we will see a slightly limited Olympic Games? Or what? What would be the tipping point for the Olympics being cancelled? (Actually same goes with the NCAA season: if some states are experiencing spread and others aren’t or if some programs limit competitions and others don’t, will only some programs race and go to NCAAs if it is held? And with that is it possible for some conferences to give athletes an extra year of eligibility, if some conferences are severely truncated but not others? Do the conferences or… Read more »