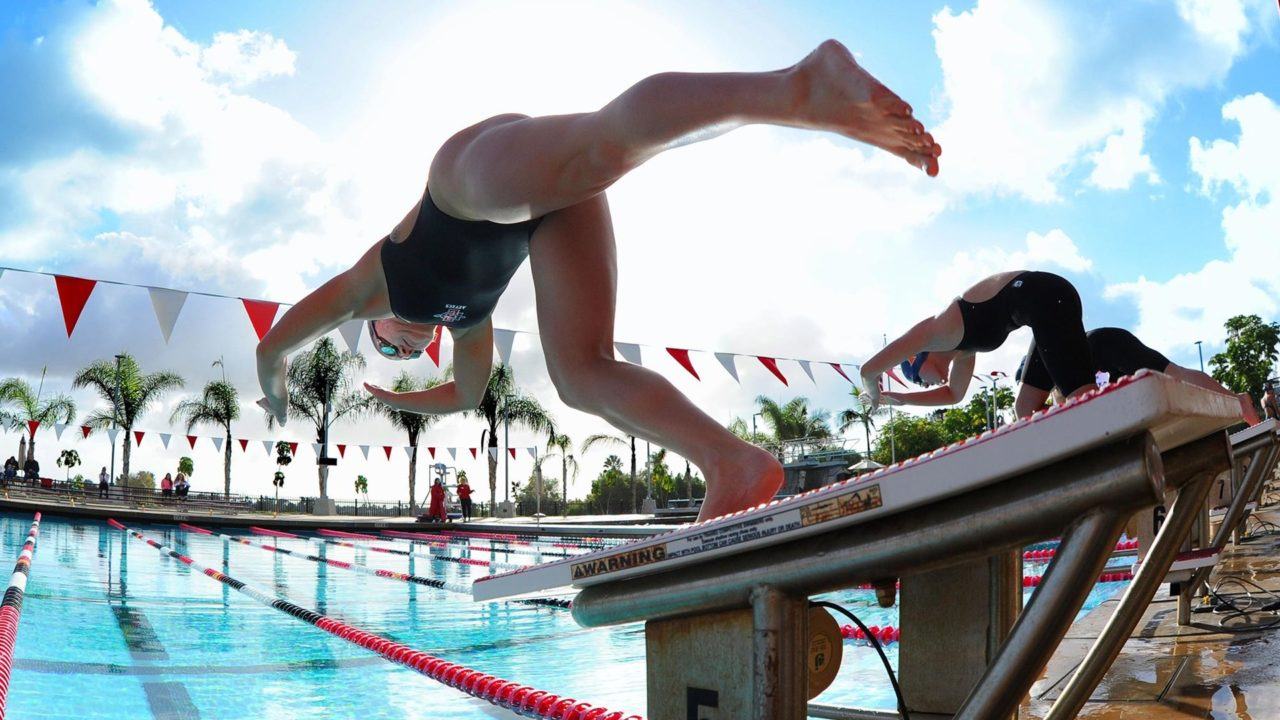 The highlight of the Aztecs' night came in the 50 free, where they posted a 1-2-3 finish. Stock photo via San Diego State Athletics

San Diego State has opened up a giant lead through the 2nd day of competition, and seem to be well on their way to another Mountain West title. The highlight of the Aztecs’ night came in the 50 free, where they posted a 1-2-3 finish. Klara Thormalm led the pack, touching in 22.41 to get her hand on the wall .01 seconds before teammate Elizabeth Menzmer (22.42). Thormlam’s sister Alma Thormalm clocked a 22.55 for 3rd. The Aztecs also picked up a 5th place finish with Samantha Geyer (22.80). The effort by San Diego State marked the first time there has been a podium sweep in an event at the Mountain West Championships since 2017.

The Thormalm sisters went on to help the 400 medley relay to victory, which finished in 3:33.64 to clear the field by over 5 seconds. Elliyana Ferrin led the Aztecs off in 53.92, and was followed by a 59.61 breast split from Klara Thormalm. Courtney Vincent then swam a 51.91 on the fly leg, and Alma Thormalm anchored in 48.20. With the swim, San Diego State repeated as champions in the event, and posted their 2nd fastest mark in school history.

Courtney Vincent had already won the 200 IM earlier in the session, getting her hand on the wall first in a tight race with Nevada’s Andressa Cholodovskis and San Diego State teammate Kristina Murphy. Cholodovsksis got out to the early lead, splitting field-leading 25.92 and 29.63 splits on fly and back, for a 55.55. Murphy then took over with a 33.34 breast split, putting her in the lead heading into the final 50. Vincent posted the fastest split on freestyle, coming in a 28.21 to finish in 1:59.03 to Cholodovskis’ 1:59.11, and Murphy’s 1:59.16.

Wyoming picked up its first Mountain West 500 free title in program history tonight when Katelyn Blattner swam a 4:45.39. Blattner led the race from start to finish, setting a Wyoming school record with her race.

San Diego State also picked up a win in 3 meter diving, where Ximena Lechuga Gonzalez posted a score of 382.65 to best the field. The performance by Lechuga marked the first time San Diego State has won the event since 2011.