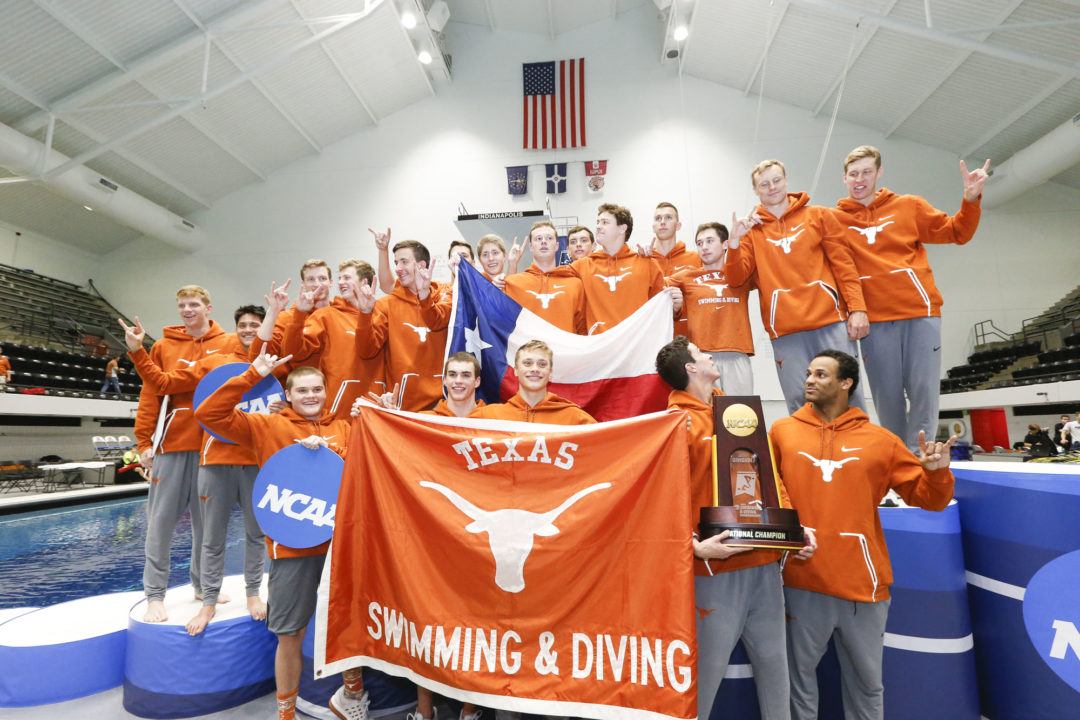 Ryan Harty's 1:41 in the 200 back highlighted the Texas men's win over TCU tonight. Meanwhile, the Longhorn women achieved their first undefeated dual meet season since 1988. Archive photo via Tim Binning/TheSwimPictures.com

The Texas men and women closed out their regular dual meet season against TCU on Friday night. There were a few notable absences at the meet. John Shebat, who was absent during the team’s meets against Arizona State and Arizona, didn’t compete for the Horns tonight. Fellow All-American Joseph Schooling was also sitting out of this meet. TCU was without Head Coach Sam Busch, who has been placed on administrative leave.

One of the highlight swims of the meet for the men came from Texas’ Ryan Harty. In the 200 back, Harty blew away the field by nearly 8 seconds. He flipped in 50.05 through the halfway point, pulling farther and farther ahead as he busted out a 1:41.56 for the win. Harty also placed 2nd in the 100 breast, touching in 55.36 behind teammate Casey Melzer (54.30).

The Texas women ended their season at 9-0 as they defeated TCU tonight, giving them their first undefeated season in 30 years. Claire Adams and Kaitlin Harty each contributed a winning double to help them achieve their perfect dual meet record. Adams was the only swimmer to break 23 in the 50 free, winning by over a second in 22.62. She returned for the 100 fly, dominating there as well in 52.87. Harty came from behind in the 100 back, outpacing teammate Remedy Rule (55.44) through the back half to win it in 55.00. She made it a stroke sweep in the 200 back, touching over 11 seconds ahead of the field in 1:57.13.

AUSTIN, Texas – No. 8 Texas (4-5) captured all 15 events and emerged with a 159-108 victory over TCU Friday afternoon at UT’s Lee and Joe Jamail Texas Swimming Center.

Texas opened the meet with a win from its 200-yard medley relay, as freshman Austin Katz joined juniors Casey Melzer and Tate Jackson and senior Brett Ringgold to earn the victory in 1 minute, 28.81 seconds.

Freshman JohnThomas Larson led a one-two-three-four Longhorns finish atop the 200 freestyle with his winning mark of 1:37.57. His classmate Sam Pomajevich followed in second at 1:39.84. Junior freestyler Jeff Newkirk added sprint backstroke to his repertoire on Friday and came away with a winning mark of 47.85 in the 100 backstroke. Sophomore Sam Kline added a second-place mark of 48.80.

The Longhorns didn’t let up in the 100 breaststroke where Melzer came away with the victory at 54.30. Redshirt sophomore Ryan Harty took second at 55.36. Sophomore Grayson Campbell led three Longhorns atop the final one-meter diving standings with his winning score of 409.80. Freshman Jordan Windle took second at 396.90 while sophomore Jacob Cornish placed third at 379.73.

Junior Max Holter led the way in the 200 butterfly and took the win in wire-to-wire fashion at 1:45.21. His classmate Mason Tenney added a second-place mark of 1:46.80. Ringgold won the 50 freestyle with room to spare at 20.21 while junior Safa Anya placed second at 21.49.  Texas swept the sprints when junior Townley Haas captured the 100 freestyle at 44.92. Freshman Luke Bowman finished a fraction of a second behind at 44.97.

Harty scored his second win of the day and put up a strong late-season time in the 200 backstroke at 1:41.56. Senior Jonathan Roberts gave Texas a sweep of the breaststroke events with his 1:59.65 at 200 yards.

Windle finished off a Longhorns sweep of the diving events with his winning score of 486.15 on three-meter. Campbell followed in second at 405.08. Katz, better known as a backstroke swimmer, took on the 500 freestyle and was victorious at 4:21.94. Newkirk took second at 4:24.83.

AUSTIN, Texas – No. 5 Texas capped its first undefeated dual-meet season in 30 years with a 162-105 victory over TCU Friday afternoon at the Lee and Joe Jamail Texas Swimming Center. The Longhorns end the 2017-18 dual-meet season at 9-0, which marks their first unblemished regular season since 1988 and their third such 9-0 mark in program history.

Texas opened the meet with a victory from its 200-yard medley relay, where the quartet of sophomore Claire Adams, juniors Olivia Anderson and Remedy Rule and senior Rebecca Millard took the win at 1 minute, 38.37 seconds.

Junior Joanna Evans, an Olympian for The Bahamas, gave Texas its second win in as many events with her 1:46.44 in the 200 freestyle. Freshman Ashley Pollok followed in second at 1:52.13.  Sophomore Kaitlin Hartynotched a victory in the 100 backstroke at 55.00 while Rule was close behind at 55.44.

Sophomore Kennedy Lohman put up another win for Texas with her 1:03.41 in the 100 breaststroke. Freshman Victoria Edwards was victorious in the 200 butterfly at 2:02.52 while freshman Grace Ritch followed in second at 2:07.56. Junior Meghan O’Brien paced the Horns with her winning total of 308.40 points in the one-meter diving event with her classmate Sofia Rauzi second at 283.43.

Lohman returned after only a short break and claimed the 50 freestyle at 23.91. Sophomore Jordan Wheeleradded a second-place mark of 24.11.  Millard returned from her 200 medley relay anchor to claim the 100 freestyle at 48.82. Junior Anelise Diener followed in second at 49.40.

Harty finished off a sweep of the backstroke events with her winning mark of 1:57.13 at 200 yards. Junior Brooke Hansen led a one-two Texas finish in the 200 breaststroke at 2:16.01 while freshman Maxine Wolterstook second at 2:20.85. Freshman Logan Shiller and her classmate Peyton Quattlebaum led the way in the 500 freestyle with marks of 4:48.91 and 4:57.80, respectively.

Rauzi completed a Texas sweep of the diving events with her winning total of 352.20 on three-meter. Adams added a victory in the 100 butterfly 52.87 with freshman Emily Reese in second at 54.42.

POST-MEET COMMENTS
Texas senior swimmer Rebecca Millard
On what it means to finish strong on senior day
It is really fun ending the dual meet season here. I am really grateful for that. I am also very grateful that we get to race TCU. They are a great school, very kind and good competitors. It was fun because you get to swim “off” events, things you are not used to and things that are fun. I got to focus solely on the 100 free and post a time that I could really be proud of. I am very proud of my 100 free. It is the best I have done this season.

On the culture at this meet
It unites the team in reminding us how the sport is fun, why we chose to do this sport, and it brings us all together. There were a lot of really great and really surprising swims. Like Remedy’s (Rule) 100 back was really good, Logan (Shiller) suited up and did a really good 500 free, Joanna’ (Evans) 200 free was really good too. It was a low-stress environment, centered around having fun…being together and being one team and getting ready for the conference (meet).

On finishing 9-0 for the third time in program history
This team is really cool. They are fighters. They are tough. There were some meets where we were in a lot of pain. That is how Carol (Capitani) sets up our schedule. She makes it hard, because anything that is easy isn’t going to be worth it. It was really fun. It was nine really solid wins. Nine times where I feel like we really got together and I think it has been a long time coming. Every year we have gotten stronger and stronger and I think this 9-0 record really shows that.

Katz 4:21! He might make that 4×2 this year or p or f’s of the 4×1. Didn’t realize he had a free like that. Gonna be huge for the horns these next coupla years. What’s his 3rd event? He got enough breaststroke for an IM?

Katz will probably swim 500 at conference, but I expect he will just focus on the backstroke for ncaas. Right now, he’s their best 100 backstrokers.
4:21 at a nothing meet is impressive though. Could be in the mix for 4×200 this year.

Totally agree. 4:21 unrested in his 3rd/4th event is incredible. Wouldn’t be at all surprised to see him win 200bk at NCAAs.

My feeling last year was that Eddie held Shebat out of the 200IM, in which JS could have finaled, to ensure 400MR would go well. Might do the same with Katz (skip 500FR) if She at isn’t 100%.

Katz’s 4:21 was definitely the highlight of this meet, but Casey Melzer’s 54.3 100br 4 weeks out of conference is a good sign too.

I’m friends with John Shebat’s older sister and she posted a picture of him today with a brace on his right knee, didn’t look good.

big bulky brace like an ACL brace or like a flimsy soft one? type of brace can definitely determine type of injury… that is not good at all for Shebat.

Shebat look liked he had surgery? He hasn’t made safe times to qualify for NCAAs, will he be MIA at big 12s?