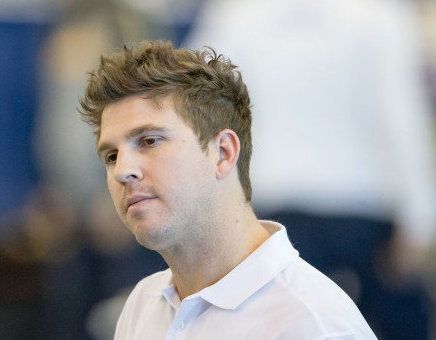 First-year TCU head coach Sam Busch is currently on administrative leave from his coaching position, though the cause is unclear. Archive photo via Tim Binning/TheSwimPictures.com

First-year TCU head coach Sam Busch is currently on administrative leave from his coaching position, though the cause is unclear.

We’ve contacted both the school and Busch himself for more information as to why Busch is on leave and how long he’ll remain there, but the only response we’ve received is an automatic reply from Busch’s account saying that he is on leave and directing questions to associate head coach Keith Dawley.

Busch is in his first season as a head coach in the NCAA. The son of longtime USA Swimming National Team Director Frank Busch, Sam Busch got his start coaching with his father at Arizona from 2007 to 2009. He later had assistant coaching stops at West Virginia and Auburn before joining the staff of his older brother Augie Busch in Virginia. That partnership went separate ways this offseason when Augie Busch jumped to Tucson to take the head coaching opening at the University of Arizona and Sam Busch accepted the head coaching job at TCU.

TCU will swim at the defending NCAA Champion Texas Longhorns tonight without Sam Busch at the helm. Their next competition is the Big 12 Championships from February 21-24 in Austin. The school has not responded to our request for clarification as to how long Busch is expected to remain on leave. He is still listed on the team’s roster page.

Does the news cycle really go that quickly people didn’t bother to follow up? Also, why are people struggling with idea of staying on topic with what the article is about?

With conference championships going on, not crazy. But if you check out TCU swimming roster Sam Busch is no longer listed.

I heard from a swimmer on the team he was fired.

Any definitive news on this?

As a student at TCU I can say that there is no definite news. The university has not released an official statement on weather he is fired, or the reason that he is on leave. At this point it is all speculation and any/ all comments should not be taken as fact.

On the positive side – his brother still has a job 😉

Nepotism to the max

Here is an unsolicited advise for TCU admin, or any other swimming program for that matter: hire female coaches for you women’s program. You will do the right thing on many levels.

MIT swimming head coach (a combined team) is a women. Just one example. Why not? Or, hire a female Assistant Head Coach in charge of ladies if you still want a male head coach.

How about just hire the best (based on merit), thoroughly vetted coach available? Female coaches have been busted for the same bad things.

Courtney Shealy Hart is head coach of the combined Georgia Tech program as another example.

Yeah for sure, I heard Janelle Atkinson is available

The reality is that few athletes (including women) want a female as a head coach. Combine this with the fact that fewer women want to be head coaches, and you see why we have so few in this position. Its not good, bad, right, or wrong, it just is what it is.

“Few athletes want a female head coach.” Is that something you came up with on your own or something you have heard athletes say? I swam from age 8 through college and “not wanting a female coach” was never a thought that went through my head.

It’s a well known fact in the swim world. Obviously for men…what is less obvious is that the majority of women prefer a male head coach as well. Now I love women’s athletics and women’s causes. I donated to a female presidential campaign in 2016. The DutchWomen moniker is not for laughs; the dominance of the Netherlands in the women’s sprints over the past 20 years is phenomenal and I love it. But when it comes to coaching, swimmers tend to prefer male head coaches. Again, not saying it’s right or wrong, it just is.

This poll is telling…83% of men feel we are ready for a female president, while 76% of women feel the same. You would think… Read more »

It’s not a well known fact in the swim world. Stop making things up

“well known fact in the swim world” – if so please support with articles related to swimming. Otherwise it is a “well known OPINION in your world.”

Only truth that may be found in your argument is that female athletes are familiar with having male coaches since there are more of them…and that leads some to believe that they would prefer a male coach. They need to see and hear female coaches to want to be one of them. There are great examples of them in the coaching ranks now as head coaches. I can come up with 21 of them without having to go through each conference/division – and most being Division 1 and several of combined programs.… Read more »

Just because DutchWomen prefer to be coached by male does not mean the rest of the world, including women, agree.

Dutchwomen- That’s a pretty big claim to be making without providing any actual research into the subject. While that may be your experience, it is certainly not reflective of the swimming community as a whole. I’m sure there are some who prefer male head coaches, just as there are some who prefer female head coaches, but it sounds like you’re doing a whole lot of generalizing based on your own opinion. A coaching position differs significantly from a presidency, so those statistics aren’t really relevant to the point you’re trying to make. They also don’t have anything to do with the sport since the polls had nothing to do with swimming and they did not draw their sample from the… Read more »

Erica (Janssen) Beine won a Conference Championship as a head coach of a Division 1 Men’s team at age 26. I think men and women can swim for a woman. Makes no difference.

Your right it can be done, but is there a better example than that? Erica was only a head coach there for a very short time over a decade ago and since then is has been with the Purdue women’s team.

In this day and age, that is a slippery slope. Will you ask that woman’s coach if she is gay since that could create a similar issue that you are trying to avoid.

Lauren Baker – we got our information from coach Sam Busch’s ‘out of office’ reply, which names Keith Dawley as the TCU associate head coach.

Thanks Braden. When I did not see it on the website roster or Miami’s was wondering how he was getting these titles.

Isn’t he the same guy that was at Houston too? Bad luck or coincidence?

He was the same guy at Houston.

I think just coincidence. The situation at Houston was drastically different than this from my understanding. You can partially blame head coaches for the foibles of their assistants, but blaming assistants for what happens to their head coaches is probably not the right direction for that to go, in my opinion.

There’s a tie here – Dawley was a volunteer assistant at Virginia for a time (where Augie and Sammy both were last couple of years), and Augie was at Houston just before Dawley got there.

Can’t be good if the School and not the Athletic Dept put him on leave.
We’ll wait and see

If true, he should lose his job. Buuuuut, to be consistent, so should every T.A., professor and adminstrator who has done the same. Will there be any universities left?

I don’t get the point of this comment. (Srsly, I can’t tell what you think.)

Everyone should be held accountable for their actions.

The point is, Steve, that many people in power at every college in America (TA’s, professors and even administrators) do the exact same thing that Busch is rumored to have done here. If they fire him, then they need to fire everyone who has done the same, and there are plenty.

If you are aware of some, you should share that with administrators. Otherwise, it sounds like you’re hoping for something.