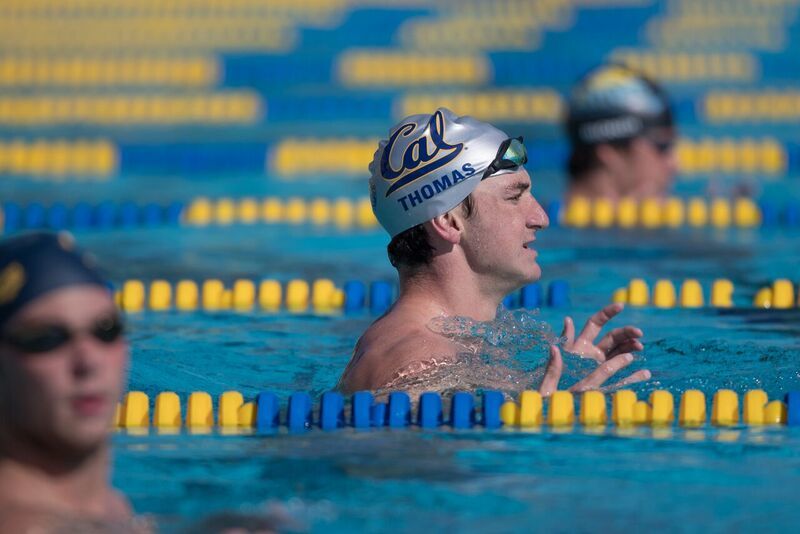 In addition to his wins, Seliskar also finished 2nd in the 200 free. He trailed USC’s Dylan Carter by about a half a second in the front half, but Carter extended his lead through the back half. At the finish, Carter set a new Pool Record with his 1:33.24. Seliskar was just over a second back in 1:34.47.

Notably absent for USC at this meet was ace sprinter Santo Condorelli. A representative for USC tells SwimSwam that Condorelli is resting his shoulder. His status for tomorrow’s meet is still to be determined.

LOS ANGELES – A trip to Los Angeles gave the Cal men’s swimming and diving team another chance to test itself in a racing environment and another strong team performance yielded a victory as the Bears earned a 168-123 dual meet win over USC at Uytengsu Aquatics Center.

A warm Southern California day provided the backdrop and Cal didn’t take long to heat up when it came to winning races. Daniel Carr, Connor Hoppe, Matthew Josa and Ryan Hoffer got the Bears on the board right away as their 200-yard medley relay time of 1:26.07 provided a win in the opening event.

Cal’s distance swimmers continued to build the team lead with a 1-2-3 finish in the 1,000 free. Nick Norman touched the wall first with a time of 9:04.39, Sean Grieshop followed in second and Ken Takahashi rounded out the Cal contingent in third.

Cal went into the first break with plenty of momentum thanks to wins in the 200 fly and 50 free. Mike Thomas led a 1-2-3 Cal finish in the 200 fly, finishing in a time of 1:44.96 to edge teammates Josa and Jack Xie. The Bears followed by taking the top four spots in the 50 free as Hoffer (19.79), Pawel Sendyk, Justin Lynch and Jensen scored maximum points in the event.

USC’s Dylan Carter nailed down Troy’s first win of the day (the first of three in a row), fighting back Cal’s Andrew Seliskar to win the 200y free in 1:33.24 in a pool record, breaking former Bear Tom Shields’ mark of 1:3370. Trojan freshman Jake Sannem was fourth in 1:37.13.

Glinta followed with a win in the 100y back in 47.28 while Vissering, rounding into form in his second meet of the season, won the 100y breast in USC season-best 52.66. The Bears filled in the next three spots in both races.

USC closed with a win in the 400y free relay with Carter, Tribuntsov, freshman Justin Nguyen and Glinta touching first in 2:54.68.

The Trojans host Stanford at noon on Saturday on Senior Day, when USC will honor eight swimmers and divers in their final home meet.

Jee wilikers them Bears got some depth. Also whoa that 2 free is moooovin. Musta hurt quite a bit as Carter equalled his 100 split in the actual 100 with a hand instead of a foot touch… not often ya see that.

SC is gonna be right there in the postseason fighting for 5th at NCs with Stanford, IU, maybe Michigan or A&M? I’m missing some teams I reckon. I predict em in 6th behind IU.

Caio Pumputis will put up some points as well

They call him the Pumputis of Love.

Bigly. What a Joker!

In terms of best classes, it’s hard to beat Schooling-Dressel, Held, class of 18.

Those guys are great, but my point was on depth of class and NC scoring as a freshman. Everyone provided so many names, I see this class being way up there relative to even that class (what was Held doing freshman year? And wasnt dressel only in 1 A final?)

We’ll find out soon enough whether Ryan Hoffer is as good as he looks, or if his age group coaches stifled his development by developing him as a sprinter from such a young age. Hopefully the former!

Yes that’s exactly what I’m saying. I wouldn’t sacrifice developmental years of aerobic expansion and neural pattern building to force that kind of early speed at 16. It could truncate future development and shortchange the athlete. I would only do that if a college scholarship depended on it. In Mr. Hoffer’s case a four year scholarship was in the bag minus the incredible 41.2

But Florida found a way to make Dressel faster. Durden is an outstanding coach, perhaps he will help Hoffer go faster.

It is certainly not new or novel.

I started swimming the end of my junior year of high school. No aerobic base at all, I was trained most as a sprinter and turned out just fine. I got faster every year.

He is trained at a high level in high school before being handed off to one of the top programs/coaches in the country. He will be just fine….

There was plenty of aerobic development at Scottsdale. If you look at the range of performances they have achieved across a range of strokes and distances and athletes, and spent any time with the coaches, you know they understand how to creat great athletes for the long haul.

I am still waiting for LC times

I have been on SwimSwam for many years, but I have to say this comment is one of the most ridiculous comments I have ever read. It is a comment posted by a person with absolutely no knowledge of anything Hoffer did when he was swimming in Arizona. It shows a level of absurdity that really makes you look silly and foolish. It is typical though. People will always try to bring down swimmers like Hoff to make themselves feel better. It is unfortunate. It is petty. I also think it is expected the way some people are in the swimming community these days. MIKEH…please feel free to contact me directly if you want to know anything regarding the way… Read more »

Maybe Santo Candorelli had to rest his middle finger, and not his shoulder

Were both teams wearing tech suits or breifs?

1:33 from Dylan seems awfully fast in a brief.