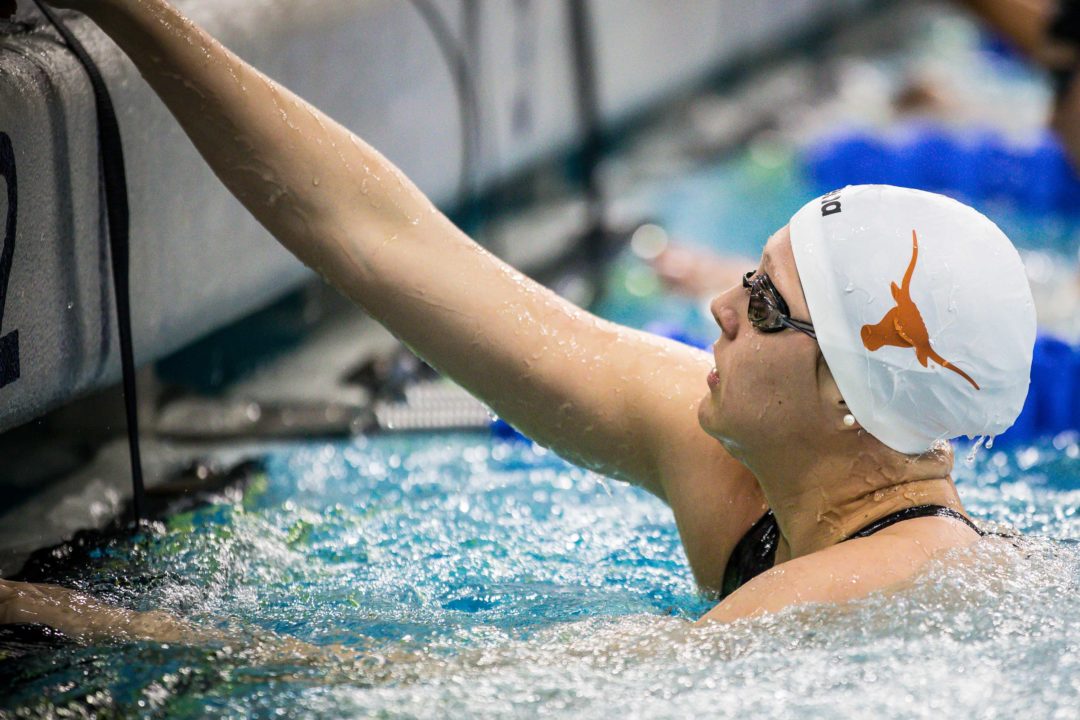 There's not a lot of drama at the top of the women's Big 12, but the battle for bronze could be fierce between TCU, Iowa State and West Virginia. Archive photo via Jack Spitser/Spitser Photography

It had been seven years since Texas had lost the Big 12 on the women’s side, and 2020 made it eight straight. That said, it wasn’t a great showing for the Longhorns. 1012 points was their lowest total since 2017 and the second-lowest winning score since Texas A&M left the conference back in 2012.

Texas swept all five relays and won 11 of 13 individual events. It was a big breakthrough for the team’s freshmen, with rookies Kelly Pash (200 IM, 200 fly), Bridget Semenuk (50 free, 200 free) and Mary Smutny (1650 free) all winning events and the Texas freshmen outscoring any other Texas class and every other class from any other program.

Kansas sophomore Kate Steward swept the 100 and 200 breaststrokes, the only events to escape Texas. The Jayhawks rode a big sophomore class (213 individual points) to the runner-up spot for the second year in a row. Kansas has been runners-up in the women’s Big 12 in four of the past five seasons. Scoring 831 total points in 2020 was easily the best score for a non-Texas team since the Big 12 moved to its current slate of teams in 2013.

TCU was third, outpacing Iowa State by about 75 points. Kaeleigh Rice led TCU in scoring, making A finals in all three of her events, the 200 IM, 400 IM and 200 back. Lehr Thorson was the top scorer for Iowa State, taking second in the 100 breast and third in the 200 breast.

Senior Morgan Bullock led the way for West Virginia, making A finals of the 200 IM, 100 fly and 200 fly, and placing second in that 200 fly. WVU fell just 11 points shy of unseating Iowa State for fourth.

With less teams and less parity, the Big 12 doesn’t show a whole lot of changing, at least in returning points. Texas is still the clear frontrunner, with almost 170 more returning individual points than any other team. Good news for Texas nationally: the Longhorns return 15 of 20 relay legs, which was a strength the team seemed to sell out to focus on based on NCAA entries before the meet was canceled.

The gap between TCU and Kansas was almost 300 points last year, but in returning points, it cuts to only about 150. Kansas does graduate exactly half of its relay legs, and that was key for the Jayhawks last year – they scored more relay points than any team but Texas.

Texas clearly has the best recruiting class of the bunch. We ranked this incoming Longhorn group #3 in the nation, which is basically the consolation prize if you didn’t have an all-time historic class like Virginia or Stanford. This Texas group is outstanding, with two top-10 recruits, both elite butterflyers.

The Longhorns also get elite dive recruit Bridget O’Neil, a Youth Olympic Games medalist in 2018. While the conference title isn’t much in doubt, the strength of this class is a good sign for Texas’s hopes nationally, especially after qualifying two freshmen for NCAAs last year.

No one else in the conference has a nationally-ranked recruiting class, but both Kansas and West Virginia add some nice freestylers.

Iowa State and TCU have relatively small classes, but should have some rookie Big 12 scorers. Iowa State’s group is led by 4:53/16:50 distance swimmer Sydney Jackson, who should probably finish in the top 8 in at least one event as a freshman. TCU has 23.0/51.1 sprinter Valerie Anne Staffeldt to help rebuild the free relays and 1:03.1/2:15.0 breaststroker Mary Jania, who can probably fight for some A finals appearances early on.

Not too much drama at the top. Texas has plenty of returning points, mostly-intact relays and should probably get Grace Ariola back and healthy after she swam a limited lineup last year. The real test for Texas will be NCAAs invites – they were pretty limited in individual invitees last year, and that would have put a ceiling on their national placing.

Kansas should be the clear-cut #2. They lose half their relay legs, but relay scoring just isn’t that big a factor in conference meets, especially the Big 12.

The drama is the battle for third. TCU, Iowa State and West Virginia all return the same number of relay legs (13 of 20). TCU has a pretty firm edge in returning points, and they have a great rising senior class that outscored their classmates from every other program last year – even Texas. (Texas juniors scored 156; TCU juniors 161 last year).

But West Virginia had the best freshman group of that bunch last year, scoring 107 individual points with their rookies. They also have the clear advantage in their incoming class compared to TCU and Iowa State. We’ll project a solid jump for the rising sophomores from WVU, and that combined with their strong freshman class should give them a slight edge on third for the time being.

TCU graduates just three individual scorers, making them the other top threat for third at this point.