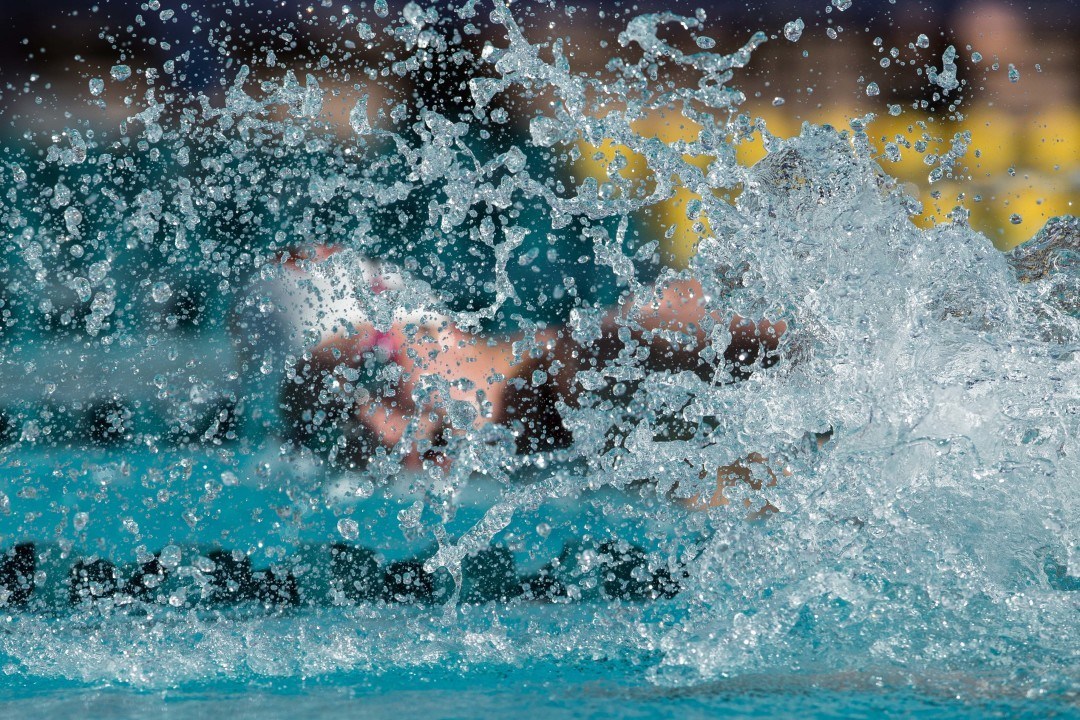 It's one of swimming's time-honored past-times: poring through meet results mid-season and arguing about whose swims count and who rested to achieve their big upset. Stock photo via Mike Lewis/Ola Vista Photography

Training Blocks: A Couple of Weeks With The LSU Tigers

The LSU coaching staff gives us a glimpse into a week of Christmas training in 2019 and some of their workouts from November 2020.

It’s one of swimming’s time-honored past-times: poring through meet results mid-season and arguing about whose swims count and who rested to achieve their big upset.

We see it especially evident during the NCAA season, where a team will tear it up at a dual meet in October, only to be met with a chorus of “who cares? They tapered” from fans and commenters.

But maybe the binary isn’t that stark. Maybe every fast swim doesn’t come out of a full taper, or even a short drop taper. To learn more, we checked in with Alabama assistant coach James Barber.

Barber studied exercise science for his undergrad degree and later earned a master’s degree in exercise physiology. He’s been a coach at the club and college level, including 8 seasons with Alabama. He talked to us about two aspects of rest that can sometimes throw fans for a loop:

One phase of training that can lead to surprisingly fast swims at times is what Barber calls “regeneration weeks.” They stand in as short, small dips in training that allow swimmers bodies to handle the grind of swimming’s year-round training format.

“If you train 20 straight weeks, it’s really easy to overtrain an athlete,” Barber says. “You want to plan regeneration weeks along the way, where you back off a little bit.”

The change isn’t drastic, at least, not compared to the promised land of a full taper. “Just a slight decrease in volume and intensity,” says Barber. “It’s not a full rest or taper or anything.”

For a college coach, though, it can be smart to line up “regeneration weeks” with dual meets, especially those that involve travel. Barber:

“From a collegiate standpoint, it makes a lot of sense. Most of the time, you’re traveling to these meets, and you lose pool time no matter what, even under the best of plans. It’s hard to get all of the training in in a meet week that you would normally get in.”

With pool time already limited, lining up regeneration weeks along with certain meets makes sense from a training schedule standpoint. And for some swimmers, competing off of a regeneration week can lead to huge outbursts of speed.

“I think a lot of the time this is where people get the idea that ‘oh, they rested for that dual meet,’ but there’s just naturally some rest built in to a lot of meets, even at the club level,” Barber says. It’s part of the ebb and flow of the lengthy swimming season.

Barber is quick to point out that you can’t swim every meet off a regeneration week. He breaks down training into two physiological phases. In Phase 1, you train to create a physiological effect on the body, and in Phase 2, you utilize that effect for performance purposes. Competing out of regeneration weeks falls mostly into Phase 2, but doing it too often saps time that should be spent on Phase 1, thereby weakening the whole training block.

There are times when outside factors make a full-length taper impractical. Barber references rests coming out of relatively short training cycles as one example, or two major meets in quick succession. In the NCAA system, this often happens with conference championships and the NCAA Championships.

Swimmers will often need to swim on a full taper at conference to qualify for NCAAs. With only a month or so between the meets, a shorter “drop” taper for the second meet can allow more time for training in between.

“The body can do that in 5 weeks. It’s hard to do that – it’s a real stress on the athlete to do that because the changes in your week-to-week volume and so forth are more dramatic than what they are with a longer training cycle.”

But every athlete responds to rest differently. Some athletes swim extremely well on short rests and “drop” tapers. Some athletes only require a short amount of rest, and a “drop” taper or even a few days of lighter training in a row can produce eye-popping swims.

Barber breaks it down physiologically:

“Athletes who are very fit, especially very fit aerobically, will have increased capilarization and vascularization of muscles. That means you can recover more quickly because you can get more glycogen stores, you can get other things to repair and rebuild the cell.”

The Science of Taper

Rest, at its core, is about recovering from fatigue sustained during training. Barber breaks that fatigue down into categories – metabolic and neural.

Metabolic fatigue deals mostly with the fuel that powers the muscles. When a swimmer’s muscles are low on glycogen and other fuels, the swimmer builds up metabolic fatigue. Neural fatigue deals specifically with the nervous system, which carries impulses from the brain to various parts of the body to tell them how and when to move. As an athlete becomes fatigued neurologically, their nervous system struggles more and more to relay the messages from the brain to the muscles. And at the same time, the brain has safeguards in place to prevent total exhaustion, and will deliberately slow down the body under high metabolic or neural fatigue.

All of those factors will affect a swimmer’s readiness to compete on a given day. With this many variables how can coaches (and swimmers) judge how much they should rest?

Barber makes clear that he doesn’t have a one-size-fits-all answer, but he shares what he’s found to be the biggest help in his coaching career:

“The most effective thing to do is to track what your athletes are doing as accurately as you can, and to correlate that to their fatigue level,” he says. “An athlete who is fatigued for a longer period of time, generally speaking, will require more recovery time to compensate to that training stimuli.”

“Your goal at the end of the season is to have their level of readiness higher than the last time the athlete achieved an optimal performance.”

The nervous system is the next frontier of athletic recovery. If we can understand that, we can time tapers with so much more accuracy.

Damn good stuff Jared. A write up Central Governor Theory would be great sometime. It can still be considered controversial, as is a lot of what Dr Noakes does, but when athletes and coaches understand it there might be a lot more insight into why the way we rest matters.

I disagree with the part about the nervous system struggling to relay messages from the brain to the muscles. It is a controlled process that stops you before total exhaustion is reached in order to protect your body from harm aka Tim Noakes Central Governor Theory. When an athletes becomes fatigued, the brain will deliberately reduce muscle fiber requirement to slow you down. As, mentioned in the article, things like stress outside the pool will contribute to fatigue. These things will cause the Central Governor to cut you off earlier than normal because your body is starting off at a lower state to begin with. There are no mixed signals or struggle to relay messages, the brain does it on… Read more »

While that may be true with respect to the brain command there is evidence that neurotransmitter concentrations can become reduced and may require time to regenerate.

Good points, all. James actually mentioned what both of you said in our interview – I went back through my notes and updated the article to better clarify the different sides to neural fatigue.

This is a great article.