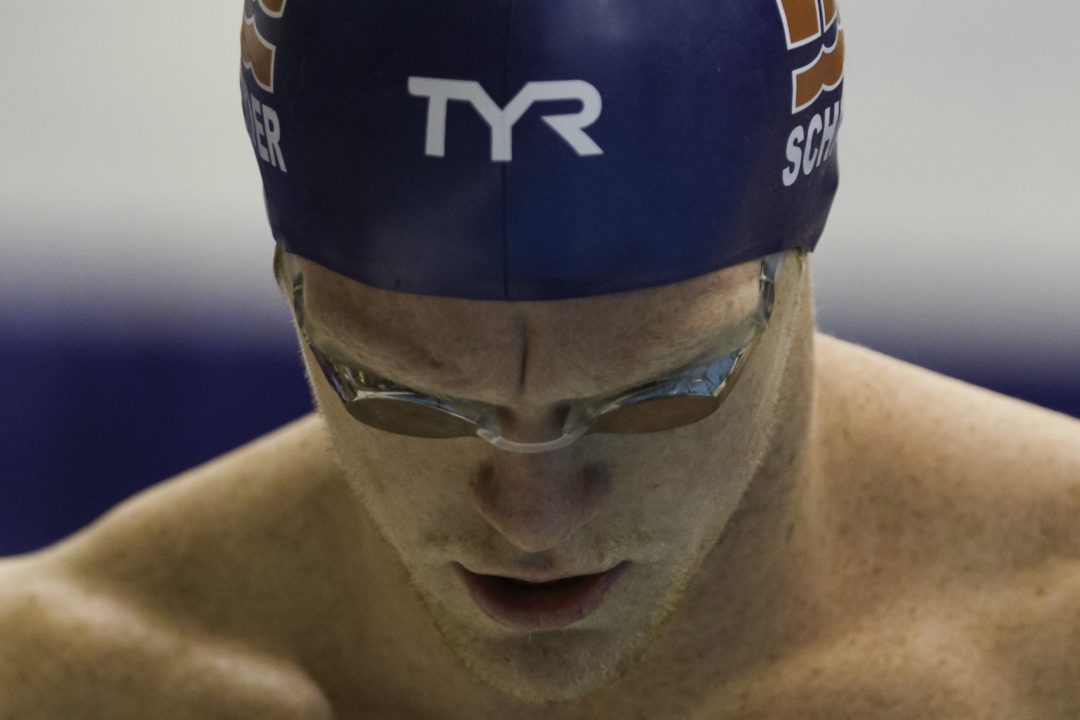 Bring the thunder in the pool with six sprint swimming workouts from the fastest swimmers and best coaches on the planet. Current photo via Tim Binning/TheSwimPictures.com

Below is a collection of swimming sprint workouts from some of the fastest swimmers and best coaches on the planet.

Sprinting in the water is a balance of excellent body position, strength, technique, and speed. Each of these sets will challenge your sprinting differently.

There are kick sets to build a bigger motor for the rooster tail of white water behind you. Some speed endurance to give you a bigger base to build explosiveness on later. Race pace work. And some running dives to help you improve your dive entry and teach your body what it’s like to swim faster than ever.

Here are some of my favorite swimming sprint sets and workouts for the chlorinated lightning bolt.

A Kick Set for Sprinters with Dave Marsh

Dave Marsh, while at Auburn, would regularly do sets of 100s and 200s kick fast to keep a sprinter’s kick at the top of their game leading into big meets.

The 100s (or 200s) were done with plenty of rest, and as the swimmers got closer to the swim meet, the number of reps began to descend.

Josh Schneider is an NCAA champion in the 50-yard freestyle and a world champion, having won a relay gold at the Doha Short Course World Championships in 2012.

During his preparation for the US Olympic Trials in 2016, he did the following set, which was typical of the training he did at the University of Cincinnati under coach Mandy Commons-DiSalle on Saturdays.

The workout kicked off with each swimmer’s individual meet warm-up, to get swimmers into a mental and physical state to race.

And then it was go time, in two parts:

First rep was done from a dive, and the second from a push, with the goal to “get as close as possible to the time you swam on the first 50,” says Schneider.

The swimmers took three minutes of rest between rounds.

The goal was simple with this part of the set, but not easy: “Beat the results, of the dive 50’s from the previous set,” he says.

Again, the swimmers took three minutes of rest between rounds, and once all of the sprinting was done and the lactate sandwich was being thoroughly chewed on, Schneider would do 400-700 of active recovery, mixing in some kick to help flush out the legs.

A Speed Endurance Set for Sprinters

Brett Hawke is one of the leading sprint figures in the sport, having coached the fastest man to ever swim the 50 and 100-meter freestyles long course, Cesar Cielo, among other sprint freestyle stroke legends including Marcelo Chierighini, Bruno Fratus, Fred Bousquet, and countless others during his coaching tenure at Auburn.

During an ASCTA presentation back in 2017, Hawke broke down his training philosophy and presented a few of his workouts.

Here is a sample session that Hawke used during the speed endurance block of the season while training Bruno Fratus in 2017.

The first few times that Fratus did the set, he was thrashed. But he adjusted quickly.

“By the third week [Fratus] got to the fourth round and killed it,” says Hawke.

This workout is another one that Hawke shared at the ASCTA conference. This one is a 2,400-meter main set, also focused on speed endurance, and was done in long course meters.

All of the kick reps were done fast, and the swims were done at a solid pace as well, with Fratus holding :27-:28.

Roland Schoeman, who has been working with Hawke from time to time, also did a variation of this set with a descending interval that you can see here.

Continuing with the run of Auburn workouts, here is a simple set that sprinters will love.

Running dives encourage you to enter the water cleanly and give a boost of speed through the breakout and first couple of strokes, showing your body what it feels like to move at hyper-speed.

“We worked daily on perfecting the mechanics of his start,” said Dave Durden, who helped develop Bousquet into an NCAA champion at Auburn. “Dive entry and breakout were a couple of the keys that we worked on.”

(Obviously, running starts should ONLY be done in safe and supervised conditions. You can’t do much sprinting if you break your butt slipping on the pool deck.)

The following set was written up by Jonty Skinner before he left Indiana University, and was featured in Cody Miller’s vlog.

“The pain is gonna be real,” Miller said of the workout.

With no active recovery between efforts and no flushing of metabolic waste happening between sprints, your body is forced to use lactate as fuel.

(I was able to try this set pre-Covid lockdown and can confirm that you will be able to taste that lactate by the time the set is over.)

After a decent warm-up, the lactate buffet was served:

After the main set was completed, there was an active recovery (“facilitation”) set 1,800 meters long.

Rather than just flopping through a slow and easy warm-down, the facilitation set is a way to further encourage your body’s ability to remove lactate.

A paper that studied active recovery following high-intensity exercise with athletes showed that this form of facilitation significantly improved their ability to remove lactate. The authors noted that this kind of set “is possibly just as important as the prescription of the training itself.”

Take Your Swim Workouts to the Next Level