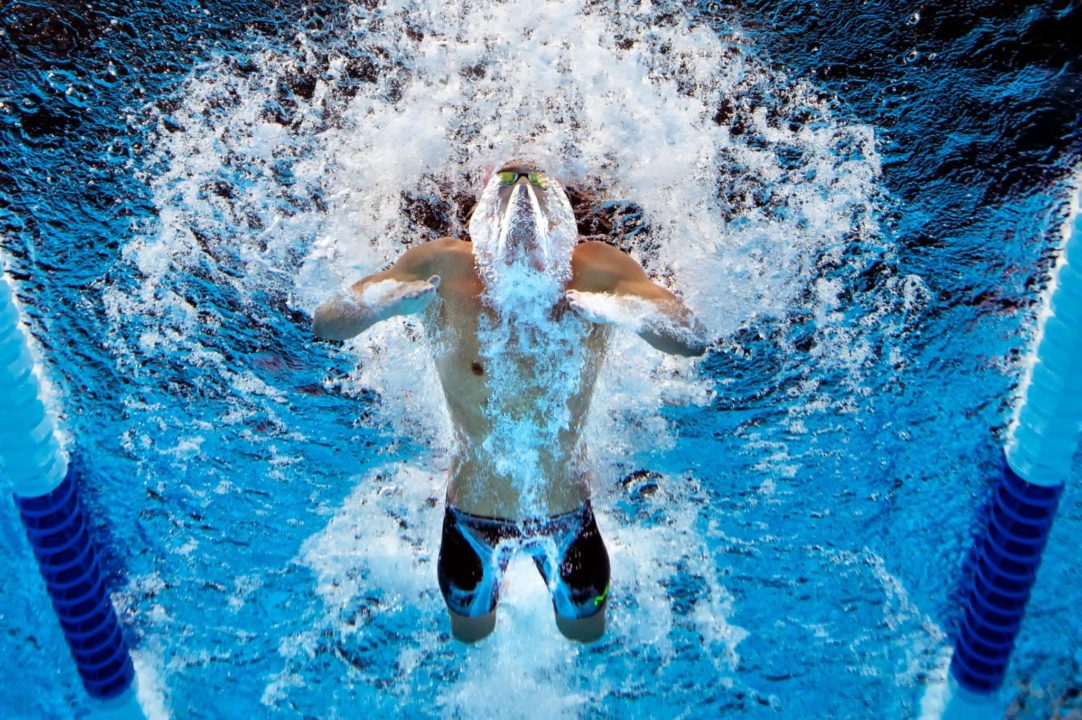 Looking for a little inspiration for your swim workouts?

Below are sets and practices from some of the best swimmers and coaches on the planet.

Are you a fast-twitch sprint machine?

Got a couple of sprint swim workouts in here for you.

Prefer to spend your time out in the Animal Lane, racking up miles like a long-haul truck driver?

Got a handful of distance swim practices, too.

Whatever your flavor, stroke, distance—here are some of my all-time favorite sets and workouts for competitive swimmers.

Katie Ledecky is going to go down as one of the best swimmers in history.

But before her legendary performance in Rio, Ledecky was gunning for the 2013 FINA World Championships in Barcelona. While preparing for that meet, where she would donkey-kick the world records in both the 800 and 1500-meter freestyles, Ledecky dropped the below threshold set.

NCAP’s Bruce Gemmell, who was Ledecky’s coach at the time, would sometimes have the group do the final round of 25s kick to help improve her finishing kick.

Michael Phelps’ bread and butter event during his reign atop the sport was the 200m butterfly. He qualified for his first Olympic Games in 2000 as a 15-year old in the event, and over the rest of his career went almost undefeated in the event, breaking the world record eight separate times along the way.

In training for the event, Phelps and his longtime coach, Bob Bowman, placed a deep emphasis on training with the best technique possible, which meant training short course and in repetitions that might seem short for an event that is so grueling.

“The majority of our endurance butterfly sets were done in a 25-yard pool,” Bowman noted.

Here is one of the sets that Bowman and Phelps used to power up his 200m butterfly.

Phelps trained a lot over the years to ascend to the top of the swimming world and then remain there for a stunning amount of time.

The meters he had to perform daily in training to not only win at the highest levels but to be able to perform at that level over and over in a variety of events were staggering.

“He had an unbelievable work ethic,” Bowman reflected. “For a period of time, around six years, he trained 365 days. For six years, he did not miss a day of training… and that is what made him the best ever.”

This is probably why when Bob Bowman, when pressed on what Phelps’ favorite workout or swim practice was, dished out this short and sweet set that is has a lot of drill and some short-burst efforts.

Set notes: The set was done in a short course yards pool.

David Marsh led Auburn to a total of twelve NCAA titles during the 90’s and 2000s. Over his storied career, Marsh has coached nearly 50 Olympians, including Anthony Ervin, Ryan Lochte, and countless others.

This swim workout was one of his favorites while he was at Auburn, working with swimmers like Fred Bousquet, Cesar Cielo, Bill Pilczuk, and other sprint legends.

The set isn’t super high in yards, but it’s right up there in terms of intensity. For the competitive swimmer looking to push their red-line speed, this workout is the ticket.

Start with maximum speed and try to hold onto that speed for as long as you can.

Set notes: For the 75s, swim out everything after the target speed meters. Marsh also suggests alternating fins-no fins “to increase lactate production.”

Jon Urbanchek is another legend in the coaching community. Urbanchek won three NCAA team titles at Michigan before kicking off a coaching career that has seen him coaching the University of Michigan, serving on the staff of several US Olympic teams, and as a technical advisor to USA Swimming.

His color-coded sets, based on threshold test sets, are a language spoken by countless coaches and used by many of the world’s top swimmers.

The anaerobic set below, designed for swimmers looking to improve their 200 events, features extensive rest periods and active rest because of the intensity required.

“Maximum lactate production and lactate buffering are involved in these sets, and maximum heart rates are attained,” says Urbanchek. “This training is used less often… because of the intensity levels involved.”

During the summer of 1999, the same year he took a sledgehammer to the world records in the 100 and 200m backstrokes, Lenny Krayzelburg performed this memorable practice.

Training alongside Brad Bridgewater, the defending Olympic gold medalist in the 200m backstroke, the set’s focal point was a descending 200 backstroke at the end of each round.

They were asked to start at 2:15 and descend from there.

Set notes: The set was done long course meters. Krayzelburg got down to a 1:58.2 on the final round, with Bridgewater hot on his heels in 1:59. To give context of how fast those times were, Krayzelburg’s time would have won the gold at the Atlanta Olympics three years earlier. Later that summer, he would break the WR, swimming a 1:55.87.

This workout for building swim endurance is a doozy.

It was performed by Erik Vendt, one of the hardest workers to ever do it. His training appetite was legendary, and stories abound of his work ethic. (The 30x1000s workout…yes, that is not a typo…  is probably the most infamous.)

Unlike that 30k session referenced above, this workout isn’t a stunt and is designed to help build speed and conditioning for the 1500-meter freestyle. Vendt performed the workout under the direction of Bob Bowman and Jon Urbanchek at Michigan in 2007.

The workout was designed to give Vendt some speed, as Bowman noted that Vendt had “enough endurance to swim the English channel twice.”

The pre-set for the workout included a kick set which was remarkable. Vendt had endurance, but he could kick like a motorboat, too.

Okay, okay, you are probably sitting there thinking, Greeeeat, those are ELITE swim workouts for world-class competitive swimmers. I’m looking for something 40% less Ledeckyish and more accessible.

Welp, this set is basic, super adaptable, and you can change it in a multitude of ways to serve your goals in the water.

The format of the set is simple: Mix swim and kick in a rep. The kick will get your heart rate up, and as you transition into swimming, try and maintain the kick intensity through your swimming.

The set is sneaky-sneaky for its ability to make your face go nice and tomato-colored, even in the chilliest of pools (case study = me).

Here is the version I did earlier today. And yes, my face is still a little Moulin Rouge sitting here typing this out. (Could be my part-Ging coming through, but I’d like to think I worked this set.)

Set notes: SCM, getting about :30-:35 rest per rep, and don’t forget to maintain that kick intensity from the kick 50 through the swim 50!

The “best” workouts for competitive swimmers

Ultimately, there is no ultimate or best swim workout, no one-workout-to-rule-them-all.

Just whatever works best for you and your swimming.

Take inspiration from these advanced sets and swim workouts for competitive swimmers and apply it to your training and goals, however Olympic-sized they may be or not.

TAKE YOUR SWIM WORKOUTS TO THE NEXT LEVEL

YourSwimBook includes everything you need to evaluate, track, and monitor your training for better swim practices and faster times on race day.

Glad these are (mostly) LC workouts, because that’s what I swim, but, um, right now my entire workout is as long as the race KL medaled in the other day. Need to figure out how to dial them down for me.

I’ll find you a good one and add it to the list.

Listen to the podcast with Marco Koch….