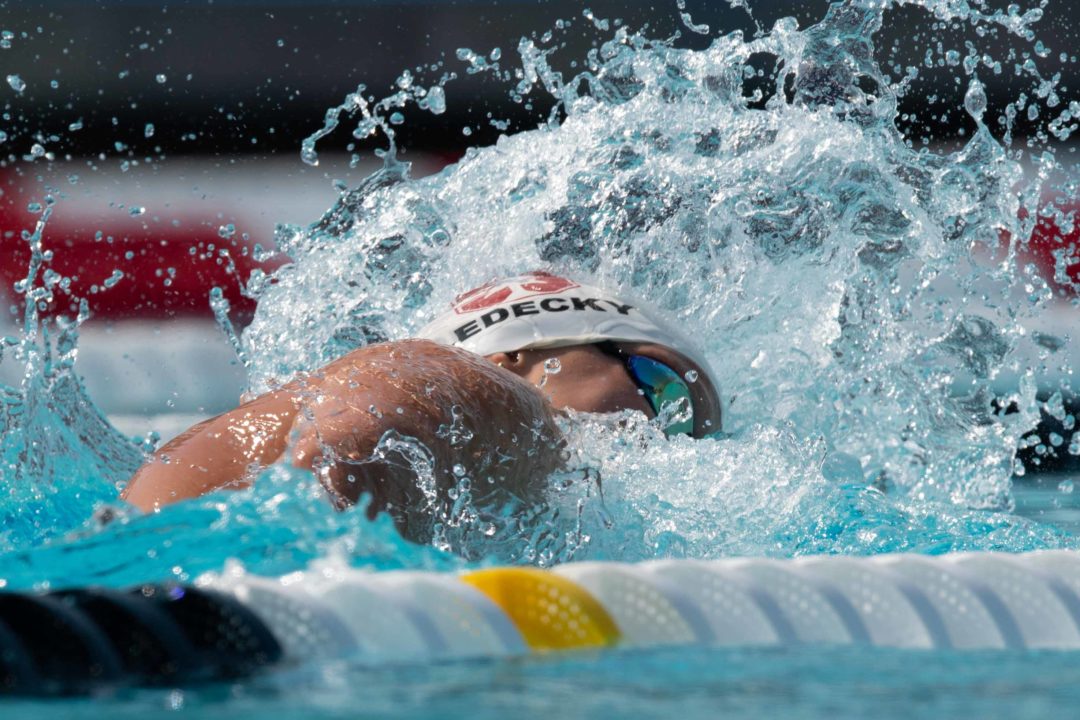 Build endurance with these 5 distance swimming workouts from some of the best distance swimmers and coaches on the planet. Current photo via Mike Lewis/Ola Vista Photography

Distance swimmers are a special breed.

The life of the chlorinated distance athlete typically entails swimming more meters and yards in a week than most people drive, discovering creative new ways to count reps, and the ability to tell you exactly how many tiles there are at the bottom of the pool.

Here is a collection of some of my favorite distance swim workouts that I have collected over the years from some of the top swimmers and swim coaches on the planet.

To the distance stuff!

Gregg Troy’s name is synonymous with bigger-yardage training. Troy, a longtime coach at the University of Florida, has produced a roster of middle-distance titans, including Olympic medalists Ryan Lochte and Elizabeth Beisel.

Contemporary swim fans may best recognize him as sprint king Caeleb Dressel’s coach, but Troy’s approach to building swimmers has long been rooted in banking the yards.

One of his favorite distance sets is a highly customizable descending speed and effort set that requires you to be Johnny-on-the-Spot with catching your splits.

Here is the set, which has intervals that vary according to the swimmer. The last round of 100(s) are also tailored to the athlete. Troy has had some swimmers do a 400m IM fast instead of the 100 at the end.

Before Katie Ledecky ascended in 2012 and 2013, Janet Evans was the primo American distance swimmer in history.

At the 1988 Seoul Olympics, Evans crushed the vaunted East Germans on her way to gold in the 400m IM, 400m freestyle, and the 800m freestyle. Evans had an unyielding appetite for hard work at the pool, with her coach Bud McAllister noting that her mindset towards practice was her big competitive advantage.

“The most important thing is her attitude toward training,” he said.

The following distance IM set that Evans performed was a distance workout that McAllister sent over. The set follows a pyramid scheme, with the interval quickening on the way down. (The way up isn’t a piece of cake either—starting off at 2:45/200m.)

Here is the distance set:

Unlike traditional distance workouts that are heavy on straight yardage, this set was designed to be swum faster than race pace. The distance workout, according to Perkins, placed “athletes into a race pace stress environment to see how they reacted and responded to it.” The theory was that if you wanted to swim a sub-15-minute mile, “you needed to be able to swim fast.”

In terms of straight-up conditioning, Reese has a couple favorite sets, including this descending distance set that tightens up the intervals on the second round through. Reese’s swimmers performed the set in short course yards.

At 2,400 yards, this might not look like a traditional distance swimming workout, but it was one of the key sets that American distance and middle distance legend Katie Ledecky did to give her endurance and speed as she trained for the Rio Olympics.

At those Games, Ledecky would perform a rare triple, winning the 200, 400, and 800m freestyles. Her coach at the time, Bruce Gemmell, posted the following set (that Ledecky swam in June of 2016), at an ASCA conference a couple of months post-Rio.

When Gemmell was asked about the secret sauce that made Ledecky so successful, his answer was simple:

“Just do the damn work.”

YourSwimBook is a logbook and goal setting guide designed

It includes a ten-month log book, a comprehensive goal setting section, monthly evaluations to be filled out with your coach, and more.

Coaches & Teams: Yes, we do custom orders for teams and groups. The more you order, the more you save. For a free custom quote for your club fill out this form.

To Start The Week We Also Do:

Swimming imperial yardages doesn’t count at all. Most of it is the “fifth stoke”
Old mate. 🙂

Enjoy that Eddie Reese set as a swimmer and as a coach. The Fishburn!

Nesty had us do a test that is somewhat similar

6
0
Reply
Coach
Reply to  The Beard