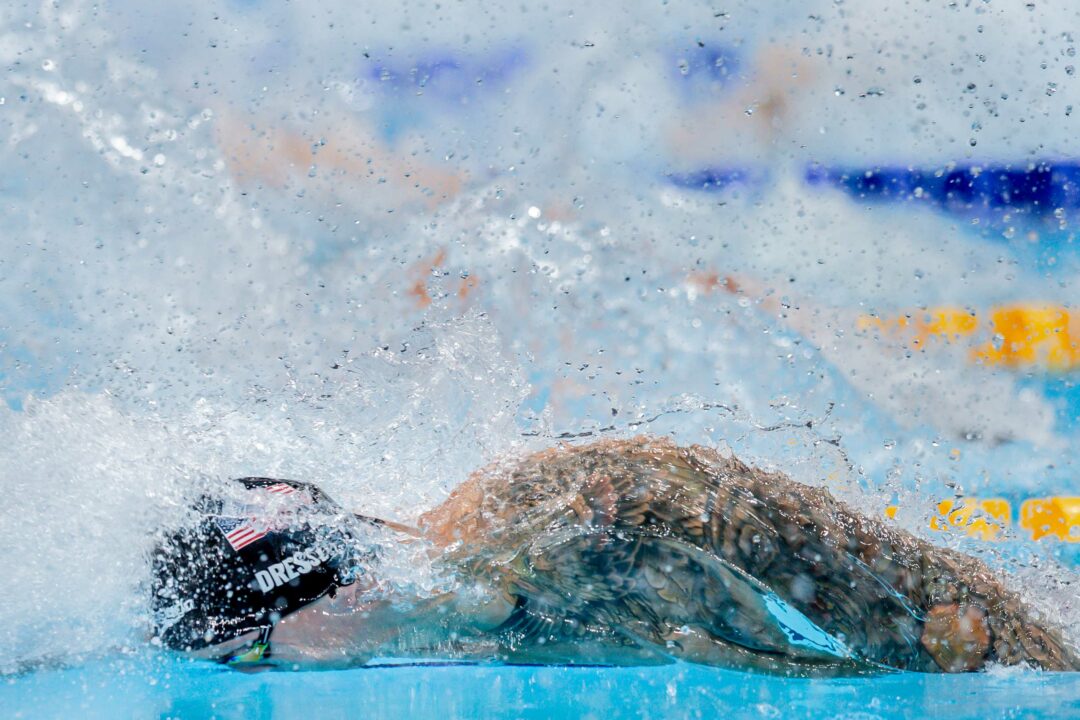 Some sharp-eyed viewers on Twitter noticed an evolution of underwater kicking technique in one of the world's best underwater kickers. Archive photo via Jack Spitser/Spitser Photography

Credit to @kimagureswimmer, @Swimcast_de and @Propulsion_Swim on Twitter for their thread pointing out these interesting observations.

The big development: Caeleb Dressel appeared to be one of the last swimmers in the Olympic men’s 50 free final to start underwater dolphin kicking.

That’s very interesting, as Dressel is also consistently one of the best underwater kickers on the planet, and outkicked that Olympic field though the seemingly-backwards strategy of waiting longer to start kicking.

On a closer look, though, the strategy does make sense. Considering that even the fastest swimmers are at their absolute fastest the moment they enter the water off the start, Dressel is actually prioritizing that max speed by holding a better bodyline and reducing drag right away.

Underwater dolphin kicking is the fastest way to swim, but even for a superstar like Dressel, it’s still not as fast as the speed carried off an explosive start. And underwater dolphin kicking is a tradeoff of sorts, with an athlete leaving a perfect bodyline and taking on a little bit more drag, in exchange for the extra propulsion from the kicks.

Dressel, essentially, is delaying that tradeoff until he’s carried a bit more of his speed off the blocks. You can see him get into a great, horizontal body-line almost right away, and he holds that minimal-drag position for a split second, until he loses enough speed to justify the drag-for-power tradeoff of underwater dolphin kicking.

This is far from a novel strategy. In fact, it’s probably better described as more evidence of a growing trend in sprinting. One other example: Arizona State assistant coach Herbie Behm (@SirHerb_the3rd on Twitter) previously pointed out the same phenomenon in another great underwater kicker, Ryan Hoffer, at NCAAs:

Hoffer was the first to 15m but the last to start kicking. Nothing faster than a good streamline! pic.twitter.com/1JlHtOUhj3

Another interesting note that came up in the same thread: @Propulsion_Swim noted that Dressel appeared to cut off his fly kicks a little earlier in this race compared to an earlier race video in which he extended his dolphin kicks even as his arms were starting the breakout phase:

Credit to Natacao Tecnica on YouTube for the race video in slow-mo below:

Can see a ton of this on the underwater shots off walls, too. Feel like a majority of backstrokers were delaying their dolphin kicks.

I could have sworn that I read somewhere that the most efficient dolphin kick from a hydrodynamic perspective was on your side. That isn’t done because of some of the challenges (legality in some strokes, swimming straight), and wouldn’t work off the start, but I wonder if it will start getting adapted for use coming off walls.

Heard this too – something about being able to maximize power out of both up and down kicks, more like a fish? I think once you’re underwater however, the difference between being on your front or side is negligible once you’re above a certain weight. I’d wager depth underwater plays a bigger roll in power output and speed in those sprints. Rylov found clear water on the backhalf of the 100m back by kicking deeper than Murphy.

This is the way I was coached in the 2000s, to be as much on my side as possible coming off walls.

Gary Hall Sr wrote about this some years back and it led to a very interesting discussion the comments: https://swimswam.com/why-dolphin-kick-is-faster-on-your-back/

I think the jury is still out on this one. Much depends on the individual swimmer.

Phelps would do it on his side for freestyle

Makes total sense since his vertical jump is about 10 inches higher than most all elite swimmers. Certainly, he will have a longer speed glide than any other swimmer before he slows to start dolphin kicks.

Do not remember what jump Caleb had at 17?

Hoffer was doing this in high school. There’s a Championship Productions video of his then-coach going over his dolphins off the start. Why break the body line at the fastest you’ll ever be on entry?

Yeah this is something most people don’t realize, hold the body line and don’t kick until you decelerate. Same off the walls too

I was noticing Romanchuck doing exactly this on his turns during the 1500.

If you have a more powerful leap or stride off the block/wall, it makes sense that you would begin to decelerate later and thus start your kick later…so it still should vary from athlete to athlete as to what is the optimal point at which each athlete should begin to engage their kick.

Saying that “delaying” in general is preferable or a trend is misleading. The athletes are simply getting stronger off the walls and more precise regarding their optimal engagement start point.

I’ve pointed out before, the secret to his start (besides his 40in vertical) is that he doesn’t drop his legs when initially fully submerged. I have a video from 2016 Olympic Trials 50Fr semis when he’s next to Cullen Jones. Frame-by-frame, you see Jones enter the water further than Dressel, but the frame immediately after submersion is when Dressel passes Jones.

He essentially “slows down slower” than everyone else because of that line he hits with his entry. Virtually every other swimmer in the world has at least a slight drop in their legs upon entry (thus putting them not in a perfect horizontal position, and thus creating more drag). It’s the perfect timing that I’m not 100% sure… Read more »