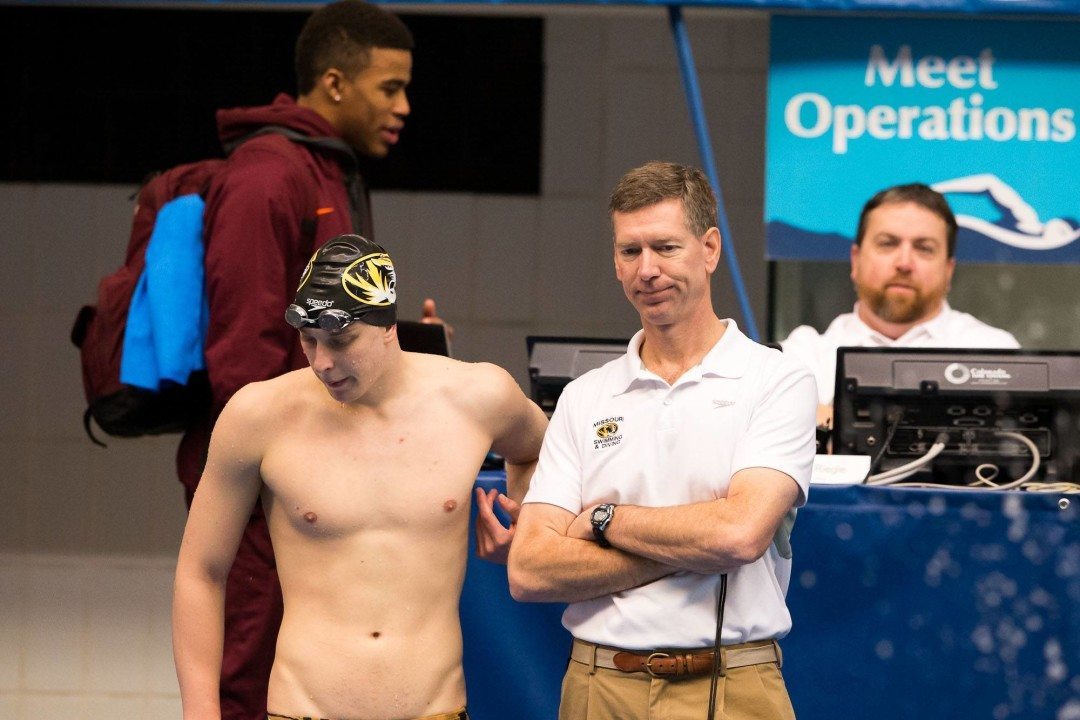 Former University of Missouri head coach Greg Rhodenbaugh has been cleared of all charges in the school's Title IX investigation into him, a PR firm says. Stock photo via Tim Binning/TheSwimPictures.com

Former University of Missouri head coach Greg Rhodenbaugh has been cleared of all wrongdoing in the school’s Title IX investigation into him, a public relations firm says.

Vox Populi Communications sent out a press release today announcing that Rhodenbaugh has been “cleared of all Title IX charges” and that the University of Missouri has officially closed the investigation.

The official closing of the investigation was issued late Wednesday, July 3rd, before the July 4th weekend,” the release says. “The notice followed Rhodenbaugh’s retention of former USA Swimming defense attorney Gregory A. Anderson, who notified the university’s General Counsel’s office that after nine months of waiting, Rhodenbaugh was filing suit for defamation of character, termination without notice or cause and other theories. Anderson alleged the never-ending investigation was intentionally interfering with negotiations between Rhodenbaugh and another premier Division 1 university to become its head coach for the 2019-2020 season.”

We’ve been trying to contact the school periodically since Rhodenbaugh was put under investigation last fall, but have not received any information on his status or the status of the investigation. The school announced last fall that Rhodenbaugh was on paid administrative leave for “team management allegations.” The Kansas City Star reported that the allegations centered around his management of female athletes and athletes’ mental health.

Mizzou promoted associate head coach Andrew Grevers to interim head coach at the time, then promoted him to permanent head coach back in May. Athletics director Jim Sterk commented on the move last month, saying that the program needed to “move on and have stability in leadership,” per the Columbia Missourian.

We’ll continue to update this story if we hear back from the University of Missouri.

Update: the school has responded with a release of its own, disputing that Rhodenbaugh was cleared of any charges. The school says it terminated Rhodenbaugh and closed the investigation without a conclusion rather than clearing him of wrongdoing. You can read more here.

The release says that former and current Missouri swimmers and coaches wrote the University in support of Rhodenbaugh:

During the investigation, countless former and current swimmers came forward to support Rhodenbaugh. Annie Grevers who swam for Rhodenbaugh during his tenure at Arizona and is the sister-in-law of current MIZZOU head coach Andy Grevers and wife of 2016 Olympian Matt Grevers, said, “This is a man perpetuating good. He’s one of the most respected, empathetic men in college coaching.” As the investigation went on, numerous athletes were recruited to corroborate the allegations and instead refuted them. Not a single assistant coach, most of who were there on the deck during the supposed discrimination, supported the allegations. One assistant coach, Kristen Pritchet, who coached with Rhodenbaugh from 2013 through 2016 -when some of the supposedly discriminatory statements were made- said,”…[H]is [Rhodenbaugh’s] demeanor was the same with all of his athletes, regardless of their performance capabilities, gender, race or sexual orientation. Never once did I hear him yell, demean or belittle an athlete….” Nearly 300 past swimmers and coaches across the nation wrote the university in support of Rhodenbaugh.

The release also says that under Title IX rules, Rhodenbaugh was not allowed to defend himself during the investigation. Rhodenbaugh’s attorney was critical of the system, saying “there was no due process.”

The release also features some longer quotes from Rhodenbaugh:

“I was stunned. In my 34 years of coaching collegiate athletes, I think everyone I coached recognized that I deeply care about them and would do anything to help them achieve their goals and dreams – in the pool and out. My assistant coaches and I were the strongest advocates for sixty swimmers. From the sidelines, I encouraged the swimmers to stay focused on their goals and to not get sidetracked by all this.”

“I came to MIZZOU nine years ago to invest in the lives of young men and women who came here to swim and to build a top ten swimming and diving program and we did that. Along the way, I have always been conscious of the personal needs and academic goals of my student-athletes. While building a top team was incredible, that goal never outweighed my desire to help my athletes personally grow as they work through life issues. The other coaches and I know that being part of an SEC D1 swim program is challenging and transitioning from high school to college is tough. We were always conscious of the total well-being of the athletes and I am sorry that a few athletes didn’t realize the depth of care that all of the coaches had for them.”

When asked about the ordeal finally coming to an end, Rhodenbaugh stated,” As I have stated before, the men and women who came here to swim under our coaching team were part of an incredible story of building a swimming powerhouse and I am proud of every one of them. Leaving the swimmers here will be tough, but I am excited for my next coaching opportunity so that I can get back to my passion for helping young women and men achieve their dreams and aspirations at the highest level.”

He should sue! That investigation took way too long and they found nothing! Greg is a class act and this situation was poorly handled!

He is filing a suit for defamation.

We will probably never know the total outcome. I’m sure he will get most of his contract and I’m thinking 3 to 5 M in damages which should happen due to the damage of his reputation. Mizzou fans don’t realize how close they came to losing the entire coaching staff due to the way this was handled.

With this behind him, how fast will he be named head coach at SMU?

That’s certainly the rumor that I’ve been hearing.

We’ve heard similar rumors, but nothing confirmed at this time.

Maybe he can take SMU back to its glory days👀

I swam with Greg at SMU. I think he’d make a wonderful new head coach. And it would be so fitting, too.

Thank God it is a happy day!

Within a week! SMU will get invited to many invitational meets once he is on board. What them rise!

Maybe he’ll be named new head coach at Army? They still haven’t named anyone and he’d be a great get for West Point.

I hope not. I gotta swim them next year…

This is what happens when you have potentially life altering issues addressed in the Title IX kangaroo court, instead of in a court of law where they belong. Now that Rhodenbaugh is suing and it will actually be heard by a judge and jury instead of a panel of college administrators, me thinks that U of M should be ready to open up the checkbook.

There is a risk to this lawsuit. To prove defamation, he would have to prove that the accusations are false. If he made one off-color joke, one off-handed comment, forwarded one tasteless chain email 10 years ago before we all learned about these risks, made one comment about a swimmer’s body…he loses the case AND it becomes part of the public record.

I don’t think anyone is that squeeky clean.

I think he’s smart enough to just leave it at the blustering about defamation and quit while he’s ahead.

I don’t think that’s how it works. A one-time joke or a one-time insensitive remark is not relevant. Anyone that has had Title IX training knows that the behavior has to be systematic, and moreover, you have to demonstrate other issues such as retaliation. Honestly, I think that if the university cleared him of wrongdoing, he probably has a great chance of getting damages especially if he can show that the university purposefully dragged on its investigation when they saw that they couldn’t find evidence of the behavior they were looking for.

I’ve know Greg for 35 years and if there was ever a coach who was squeeky clean, it’s him. The guy is a family man with a wonderful wife and 8 kids. I hope he sues them for all he can. For all the good Title IX seeks to achieve, this is the dark side of it. The fact that a school can make an accusation and suspend a coach without providing details of the accusation nor allowing him the opportunity to testify or hear testimony from the accusers is just wrong. Hope to see him roaming the Hilltop at SMU soon!