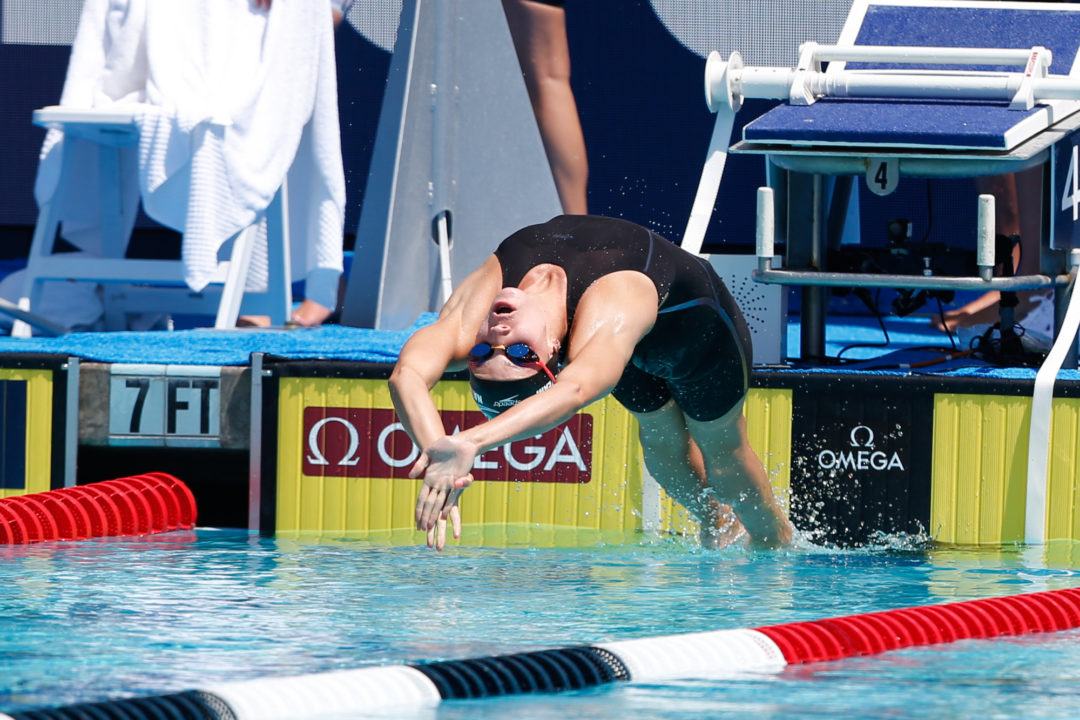 Regan Smith broke the junior world record yet again in the women's 100 back, this time clocking 58.45 to tie Katinka Hosszu for 7th all-time. Archive photo via Tim Binning/TheSwimPictures.com

After lowering her 100 back junior world record by close to three-tenths this morning at the Counsilman Classic in Indianapolis, rising American star Regan Smith took off another tenth tonight to lower it for the third time in the last month.

She moves into sole second in the world this year, trailing only Kylie Masse (58.16).

Smith has now broken the record six times – seven if you include tying herself.

Taylor Ruck took down Minna Atherton‘s 2016 record of 59.34 at the 2017 World Juniors in Indianapolis, but Smith followed by going 59.11 in the final to break the record. She equalled that time leading off the women’s medley relay to tie it, and had also gone 58.95 on the mixed medley relay at the meet but that swim wasn’t recognized as an official WJR.

The swim moves her up one spot in the historical rankings, jumping from tied for eighth with Ruck to tied for seventh with 2016 Olympic champion Katinka Hosszu.

The 58.33 on the list from Missy Franklin is actually the fastest ever swim from a junior swimmer, done at the 2012 Olympics where she won gold, but is not the junior world record due to the fact they didn’t start being recognized until 2014. Franklin’s swim is, however, the official NAG for USA Swimming in the 17-18 age group.

That would have won the Olympics in 2016…

Sad to see Smith’s trajectory is going to be stopped when she can’t swim the 100 back at Worlds. That’s the way it is though.

Why is her trajectory being stopped? She will continue to train and swim meets.

That’s like saying when the NBA finals was tied 1-1, analysts were saying that it was a must win for a team. False, it is not a must win unless a loss causes you to lose the series.

What a stupid system….

The most laughable WJR is the men’s 400 free, where Mack Horton is the record holder even though Ian Thorpe owns all the NAG records and was 4 seconds faster than Horton was at 18. 3:44 is a good time for an 18 yo, but it’s far from the true WJR.

Very sad that there are many times that arent recognized which makes WJRs less impressive.
For example, why Milak’s 1:53,7 is the WJR when he swam 1:52,7, also as a junior?

Can Regan Smith swim 100m back individually at the world championships?

Smoliga and Baker are swimming the event. Smith could get a relay swim if she’s in better form than the others two

That is disappointing!!. Selection process should be changed.

It’s so disappointing that the U.S. selects it’s Worlds team the previous year.

Will Smith get the nod for a relay lead off? At least on the prelims relay?

Depends – any word on Kathleen Baker’s rib situation? If KB cannot swim, then she would probably get the nod over Olivia Smoliga for the actual relay, not just prelims, yes?