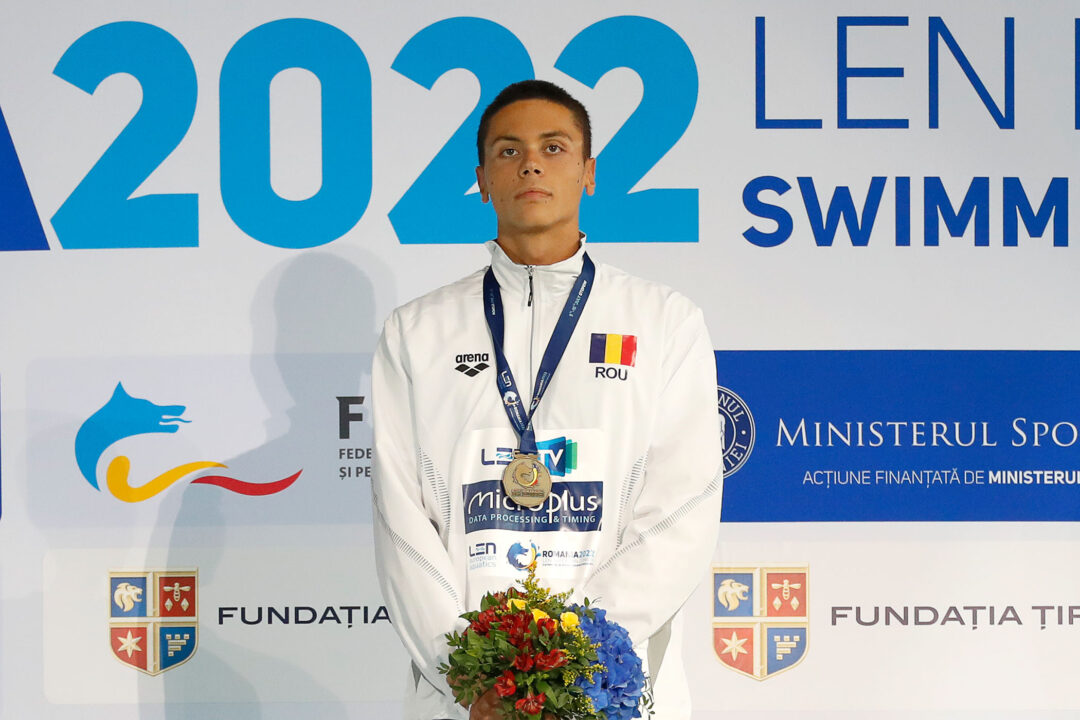 Popovici compared his experiences racing in front of a home crowd in Bucharest, Romania, to those of Kristof Milak when he competed at Worlds in Hungary. Current photo via Simone Castrovillari

Volodymyr Lisovets of Ukraine is the defending champion and top seed in the boys’ 100 breast final headed into the last session of the meet.

The most notable individual swim on Day 2 of the European Junior Championships was David Popovici‘s boys’ 200 free race in front of his home crowd in Bucharest, Romania. Although his time of 1:45.45 wasn’t as fast as the 1:43.21 World Junior Record he set at World Championships, it was still good enough to win by over two seconds.

“Today it wasn’t about time,” Popovici said. “I just wanted to enjoy this swim, I took the breath towards the crowd side to see the people waving their flags and jumping in joy and it was great.”

Popovici compared his experiences while racing the 200 free at home to those of Kristof Milak, who broke the 200 fly world record and won the 100 fly title in his home country of Hungary at the World Championships. “Now I kind of recognize what Kristof Milak could feel while racing at home in Budapest at the Worlds…” he said.

He also accredited the atmosphere of the crowd as to why he had energy to go fast leading off the 4×100 mixed medley relay, where he clocked a time of 47.34— his third fastest ever and quicker than the 47.56 he went to win at Worlds.

“Even if I had multiple swims daily, this atmosphere really helps me to recover and feel fresh.”

Girls’ 200 free winner Nikoletta Padar spoke about her individual race, saying that she “expected to claim a win here and to be in the lead during the whole race,” and “just wanted to do a better time.”

“It’s just a good feeling that you are destined to win, and you deliver, now my focus is on our relays.” Padar said. She recorded the fastest girls’ split of the field in the mixed 4×100 free relay, going 54.28 to help Hungary take gold in the event. Later in the meet, she will race the 100 free individually and will likely be on a few more Hungarian relays.

Padar’s teammate, Dora Molnar, talked about her experience anchoring Hungary’s relay in a time of 54.49. The Hungarians were trailing Romania in the relay up until the last 50 meters of the race.

“I love to be the anchor and push as hard as possible” Molnar said. “I was in pain towards the end, but my heart brought me forward, tried to close out everything, the rivals, the noise and focus on my swim and it worked.”

“It is hard to swim the 1500m free final and the 200m free final in the same session,” Tuncel said of the double. “After the 200m I was a bit nervous if I could do my favourite event well but when I started it, I was calm and I was able to do what I was expected to do. I’m happy to get two medals in one day.”

“It is my last year among the juniors, so it was really nice to win this race.” The 17-year-old Tuncel said. LEN, the governing body for European Aquatics, defines a junior girl as a swimmer aged 14-17 in by December 31st in the year of the competition.

One of the major records broken today was in the girls’ 50 back, when Mary-Ambre Moluh claimed gold in a meet record time of 27.74. She shed 0.01 of a second off her previous mark of 27.75 from the semifinals yesterday.

“This is my first big junior meet, and a final is always a complicated thing, I was a bit nervous before it, but now I’m happy with the gold, the first one here for France, which is great,” Moluh said. “I wanted to do a bit better time and there are a lot of things I have to do better even in this 50m back, so I want to work on this for sure.”

Moluh bypassed the World Championships in order to focus on this European Junior Championship meet. Her best time of 27.63 in the 50 back, which she set in May 2022, still stands.

The boys’ 50 back winner, Ksawery Masiuk, spoke about the challenges of racing multiple meets back-to-back. He recently competed at the World Championships, where he took bronze in the 50 back in a time of 24.49. Today, he clocked a 24.65 to win gold. He also led off Poland’s mixed 4×100 free relay in a massive best time of 48.37 to help his country win bronze.

“The World Championships were my main event, here I just tried to keep up some speed and I’m happy with the time after all, and also with my swim in the relay yesterday where I did 48sec.” Masiuk said. You know, at this age it’s really hard mentally to do race after race in such a short period of time – it’s challenging to be ready some ten days after a World Championships. So I’m happy to get this gold.”

In the boys’ 200 fly, twin brothers Krzysztof and Michal Chmielewski pulled off a 1-2 finish. “I don’t know why I’m faster than Michal, maybe he needs to train even harder,” Krzysztof said. “It was an easy race for me, for us, we are happy to stand on the podium again.”

Ukranian swimmer Volodymyr Lisovets took gold in the boys’ 50 breast. He said after his race that he was separated from his family in his home country to train in both Poland and Germany prior to the race. In Feburary 2022, Russia invaded Ukraine, and there is still an ongoing war between the two countries.

“I worked hard for this win, and I want to thank to my family and coach for all their support and also for those who let me train in Poland and in Germany during these months.” Lisovets said. “This victory is for the people of Ukraine… It is really tough to be far away from my family, but they are in safe back home and I hope we can see each other soon.”

Eneli Jefimova took the girls’ 50 breast in a time of 30.44. She is the Estonian record holder in the event, setting that mark with a 30.08 from the prelims of the World Championships.

“I’m happy, of course, though this time is very far from my personal best, but in this event the win mattered.” Jefimova said. “This meet is too close to the World Championships and to be honest, I don’t have the same speed I had two weeks ago.”

That 48.3 is legit from Masiuk, he’ll be a big name to watch in years to come